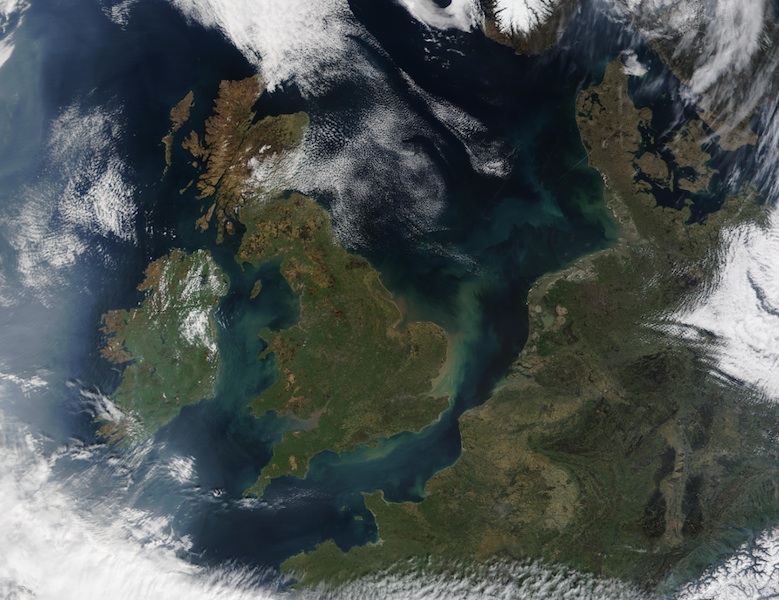 Satellite image of the UK and NW Europe from above. Image source: wikimedia cc

Winston Churchill once said: “You say you have enemies? Good. That means that you have stood up for something, sometime during your life.” But, in a case such as this, whether or not this should be interpreted as a tribute I am not so sure, considering how high the price of having such enemies proved.

It was last Thursday that I felt slightly ashamed. Whilst I and most of the rest of the country were more interested in the England v. Wales Euro 2016 football match, a 41-year-old mother of two and MP for Batley and Spen, Jo Cox, was being mercilessly stabbed and shot to death by someone who was screaming at her: “Britain First”.

In the days since then, the police have concluded that the man arrested for her murder, Tommy Mair, a man who has had serious mental health problems in the past, did indeed have links with pro-Apartheid, Neo-Nazi and nationalist groups; and that, to all intents and purposes, his attack on Jo Cox was politically-motivated.

This marks the first time in over 25 years that this country has seen the likes of a political murder, remembering, of course, the Conservative MP, Ian Gow, who was killed by an IRA car bomb outside his house in 1990. Since then, there have been no more but a few violent attacks made on politicians, most of which have been extremely isolated incidents that have thankfully avoided loss of life.

So, we must now ask ourselves the question:

What kind of politics was it that Jo Cox stood for so passionately in her life that could have got her killed? 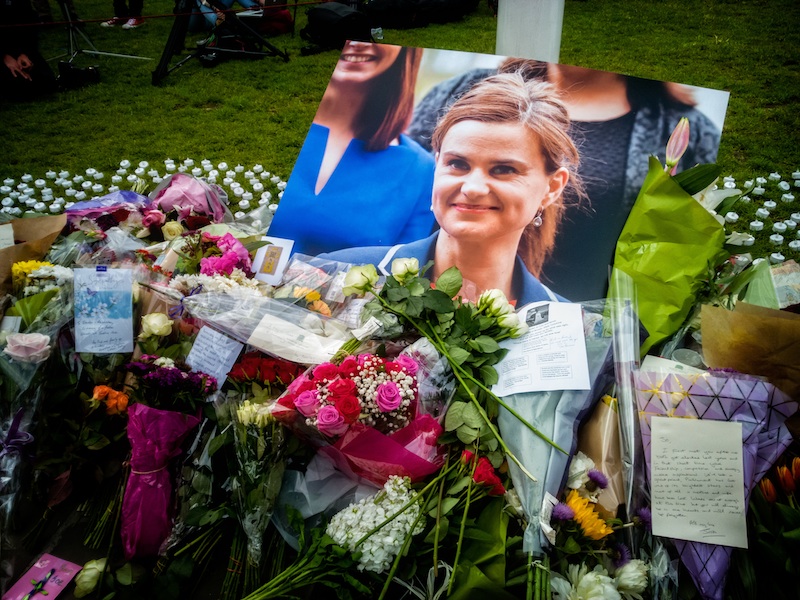 We need merely look at her track record in parliament to understand that she was a committed parliamentarian. She had been one of the 36 Labour MP’s who had voted to put Jeremy Corbyn on the leadership ballot, but only as a means for allowing a broad debate within the party.

She campaigned tirelessly on behalf of Syrian refugees throughout Britain and for a more humanitarian means of ending the conflict in Syria, and she later abstained during the vote in the Commons last December against the wholesale bombing of Syria.

But, most recently, she had been a supporter for the Remain campaign in the upcoming EU Membership Referendum. Indeed, she had used her maiden speech in parliament (it’s a special event for any MP when they make this speech and no other MP may be permitted to interrupt them) to celebrate her constituency’s ethnic diversity.

She was a charming and wonderful woman whose efforts were praised on both sides of the Commons, who were recalled in the middle of the EU referendum campaigns so that they might pay tribute to her, as well as her efforts and her far-too-short career. Already more tributes are forthcoming, for example, Oxfam intend to release a special Glastonbury live album, and a charity appeal launched in her name has already raised over £1 million.

Suspended for offensive marks about the murdered Jo Cox

So, in this current atmosphere of tributes and remembrance, it was not at all possible to even conceive that anyone, anywhere could possibly think of a bad thought to say about this unique woman. But, low and behold, the Brexit (British Exit from the EU) camp has shown once again that their members are not beyond the low standards to which men like Donald Trump have stooped in order to attain votes.

Already, a Conservative councillor, Dominic Peacock, has been recently suspended from the Tory party for making offensive remarks about the charity appeal launched in Jo’s name; stating on Twitter that he had just “donated the steam off his p*** to the Jo Cox memorial fund” and that he was “sick and tired of this woman’s death being used against the Brexit cause.”

I don’t know about you but this is not quite Donald Trump’s America just yet. This is the UK. Decent people do not make such unfeeling and inappropriate comments at a time when there is still a grieving family, mourning for the loss of a beloved mother and wife, in addition to an entire community grief-stricken for the loss of their worthy representative. 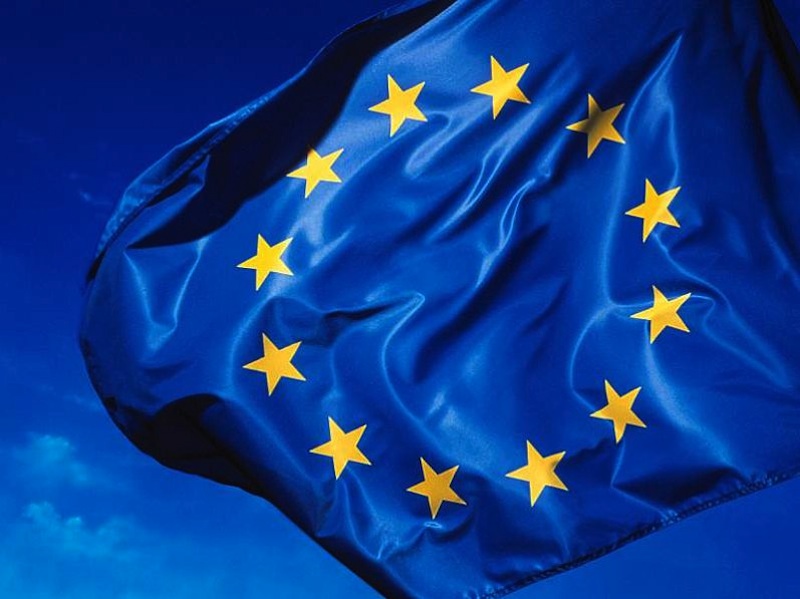 The EU flag: will it be flying over the UK for much longer? Image source: wikipedia cc.

Over the last few weeks, whilst I have been a writer at theSprout, I have decided to remain silent when it came to the issue of the referendum and the potential so-called Brexit. I have done so because I have long been of the belief that any issues, imagined, exacerbated, or otherwise, pertaining to our membership of the European Union were pale in comparison to the issues currently facing us as a nation with a Tory government in majority rule, issues that this same government hopes to distract you all from by using this referendum as a smoke-screen.

I realise now that I was wrong. I realise now that the issue of the EU Referendum truly is one that will decide how we, as a nation, will progress forward in the future in our dealings with the rest of the world.  This referendum will decide whether or not we truly will stick to that age-old axiom: “If American sneezes, then Britain gets a cold.”

This referendum will decide whether we, as a people, will throw all of our recourse to the dogs and become like Donald Trump’s nightmare vision of America, where you may deal with anyone who happens to disagree with you by having them ejected out of sight and out of mind.

This is not how debate is done in our country. In our country, we prefer to stick with a much better axiom, put forth by Orwell: “If liberty means anything at all, it means the right to tell people what they do not want to hear.” In this country, a far-right racist may debate with the liberal and the comedian regardless of whether he actually has anything of any politic value to say.

Whereas I, I have made the mistake of saying that the one positive thing to come out of this referendum is watching the Tory party tear itself apart from the inside, arguing over the issue of sovereignty and the EU as it always has done, ever since they first took us into the blasted thing when it was still then known as the “common market.”

My mistake was in not realising that if the referendum does bring forth a leave result then we shall be condemned as a nation to suffer through the next four years of a Tory government under the aegis of the likes of Boris Johnson and Michael Gove. And, although I am no friend of David Cameron, I am at least confident when I say, “Better the devil you know than the devil you don’t.”

But, I could be wrong. Indeed, the British people may do what they have continually and consistently done each and every time now for the past six years when it comes to the issues brought forth by a referendum or an election. Which is to play it safe.

And, for all I know, it may very well happen here today. The British people may very well go to the polls today, despite having been bombarded over the past few weeks and months by the campaign propaganda and decide, as they have always historically done, to play it safe and choose to remain. Because the British people, it is true, have no stomach for either huge social upheaval or large-scale political conflict.

“The type of change that leaves our island nation better off”

The average person in the street will always be more likely to vote for the party that proves it can lead them down the path of stability with the promise of good times ahead. And if David Cameron and his camp are really to be believed, then the path that leads towards the remain camp may very well be his best option.

As Niccolo Machiavelli, the father of today’s modern politics, once wrote in his political treatise, The Prince: “In the antiquity and persistence of time, memories of innovation and the reasons for them disappear; because one change always leaves a toothing-stone for the next.” Let’s hope that the British people choose the right type of change when they go to the polls today. The type of change that leaves our island nation better off than when we found it.

Young Citizens Get Involved in Cardiff Bay ‘Clean Up’

#YourShout: Part of the ‘future generation’? Let leaders know what you want!