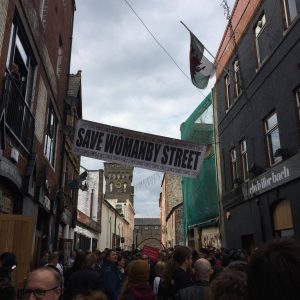 On Saturday the 29th March, the people of Cardiff took to the streets in protest over their beloved Womanby Street. A hub of the local music scene, Womanby Street is renowned for Welsh music and Welsh language club Clwb Ifor Bach; which has been visited by emerging big names such as Astroid Boys in addition to Welsh musical legends like The Stereophonics and Super Furry Animals . It also homes the dedicated metal-rock bar Fuel, Tiny Rebel and the Gatekeeper, a JD Wetherspoons chain pub which many have taken to after a night of sweaty gigs, to name a few. 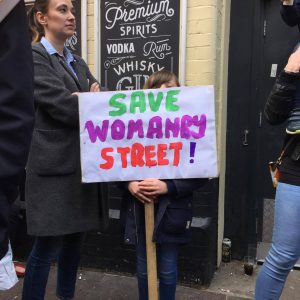 Womanby is not just a street for us, hence the campaign. It is where so many bands start out – playing small local gigs, where you can explore the Sho gallery in the Castle Emporium or browse for vintage clothing. With a history as long as Cardiff itself, it is no surprise that uproar ensued after the soul of this scene was threatened. 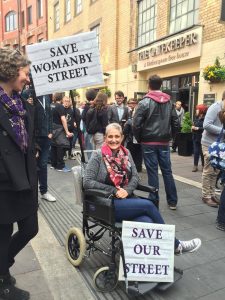 Recently, The Full Moon was closed and replaced with a new jazz bar named the Bootlegger. To no surprise, people were not pleased to see their beloved Moon club shut down. Not long before that, the long living pub Dempseys which had been a staple of Womanby for many years was also closed down. Thankfully, the Full Moon has recently reopened as The Moon Cardiff, following a fundraising campaign by old friends and staff members; who have vowed to keep the Full Moon breathing for as long as possible.

With these recent closures, anxiety was certainly running high for those who frequented Womanby. This took another turn when J.D Wetherspoon announced their plans to turn their current pub The Gatekeeper into a boutique a hotel. There has also been a noise complaint issued against Fuel Rock Club and now proposed plans for new residential buildings to be erected next door to Clwb Ifor Bach. Due to noise complaints and laws, this could be a genuine threat to the closure of even more venues on Womanby Street. As the last straw, the Save Womanby Street campaign began, with the aims of protecting the live music venues of the city. 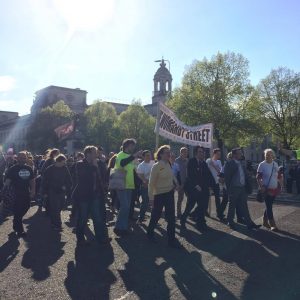 The march was a success, starting on Womanby and making its way through the city centre until reaching town hall. Here, the crowds looked even larger than expected, with prominent musicians and politicians giving speeches on the hoped longevity of Womanby Street and live venues in Cardiff.

With an atmosphere of unity and togetherness, I can only pray that no more closures will occur and the street will continue to flourish – a feeling that many of us at the march shared deeply.

Creative Republic of Cardiff Launch The Moon Cardiff This Weekend

An Events Guide To the National Eisteddfod

Free and Cheap Things to do in Cardiff: 25-31 October