Review: Trainspotting with the Cardiff Players

One might think that if a Welsh amateur dramatics group was staging the original, pre-film stage play of Edinburgh’s most famous cultural export, Trainspotting, they might transplant the setting somewhere more local and do it in Welsh accents. As director Leanne tells me- “that would just turn it into Human Traffic.“

So it was that I was pleasantly surprised when the actors came on stage speaking trained Scots. Yes, we know it’s fake but no, by the end you won’t be too bothered by it. And it’s true: in the world of Trainspotting, Scotland itself is the fifth Beatle. You could no sooner take the tartan out of Trainspotting as the sugar out of Irn Bru (oooh, topical!). Here’s where I must admit that I was handed a can of Irn Bru on my way in to the press night as a peace offering. 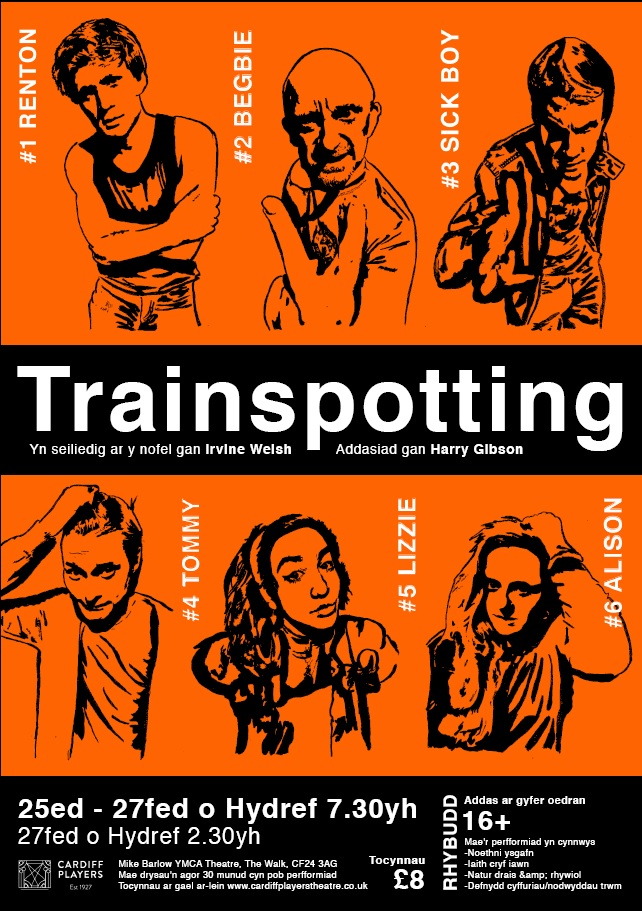 Speaking of Beatles, by the way, one thing everyone knows from the Trainspotting film poster is the five main characters. It’s a long play, and you may be sad to know that it doesn’t feature the character of Spud at all. Where this original adaptation differs from the modern Trainspotting Live show is mostly the length, the nudity, and the shock horror. Live is much shorter, but here no-one gets naked and the audience doesn’t risk getting covered in odd substances of varying descriptions.

Just because the actors don’t get naked doesn’t mean they don’t give it their all. The heroin make-up is really good too- honourable mention to the acting of Tommy, a far more central character in the stage versions than the film. The women come to the fore too- with a weird, hazy, feminism-on-drugs scene at the end.

I have only one real criticism of the play. There is a scene where two of the characters fight a passer-by for a taxi, but it’s done with a shopping trolley. During this, I was constantly fretting that the trolley might roll over the edge of the stage.

Still strictly a play for over 16s, I would say, even without nudity, blood and so on. The storyline features drug use, the death of a baby, violence and, sadly, AIDS. An adult understanding of the themes is required to completely enjoy.

Trainspotting runs Thursday to Saturday in the theatre at Cardiff YMCA, just off City Road.

If you’ve been affected by alcohol or drugs, The Sprout has information for you.