Review: The Wind in the Willows @ Sherman

The Wind in the Willows

The Sherman Christmas show has been a staple of theirs for many years. It’s the usual bring all the family affair, with the aim being directly focusing on children’s shows. Past successes have included Arabian Nights, The Borrowers and The Lion, The Witch and the Wardrobe. This time it’s The Wind in the Willows by Kenneth Grahame and I was curious to see what they do with this classic tale.

Adapted for the stage by Mike Kenny, this version never trails away too far from the source material. We see grand Toad Hall now mostly dilapidated and up for sale. In comes the Rat, Badger and Mole who reminisce about their time spent there with the famous Toad. Through the medium of direct storytelling, they share with us the story that we know and love. The break neck speed of the pacing at times evokes the famous production of The 39 Steps, with a small ensemble playing an array of multiple roles. 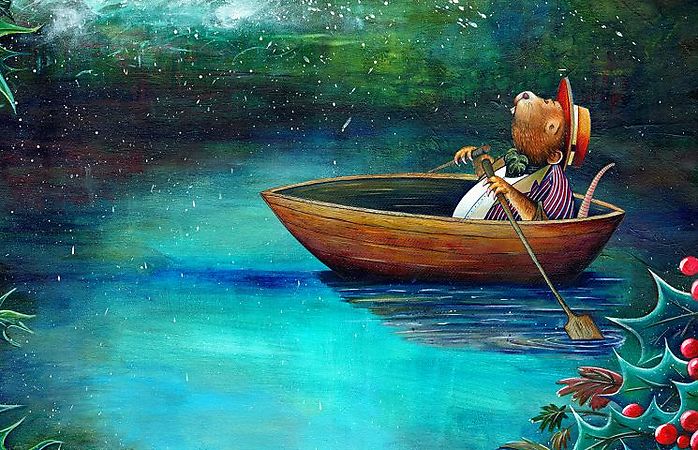 They get away with the odd pop culture reference (Strictly Come Dancing and Christmas carols get honoured), yet are never too forced. The motif of the show is loving nature and abstaining from human vices and their ways. You could write a thesis on the psycho-political themes that feature in the story: Does Toad represent addiction? Does Mole represent anxiety? Are the Wild Wooders, who siege Toad Hall Communists? It’s something to mill over during the festive period…

The lead performers are perfect in their transformations into their animal counterparts. Jessica Murrain as Mole is nerdy, nervous archetype who realises just how important friendship really is. As Rat, Dominic Rye is the jolly good gentleman we expect the character to be. He has much charm and is so easily dashing in the role. Zara Ramm (looking like a joyful cross between Cruella de Ville and a punk) is our joyfully cantankerous Badger. She seems to really relish the role, epitomised in the intervention for Toad about his rampant motorcar addiction.

Of course, as Toad, Keiron Self steals the show (as any good Toad would). At times camp, furious, manic or just plain silly, he has an air of Gyles Brandreth about him. His great comedic timing is ignited throughout and we do have a blast when ever he is on. Hats off to Emma Cooney, Hannah McPake and Rebecca Killick for their unrelenting energy as the innumerable roles they tackle here. The only downside to this small cast is the lack of action found in the battle at Toad Hall, to reclaim it back. It’s hard to think of an army of Weasels and other flesh eating mammals when it’s four against three, though the inclusions of shooting targets briefly solves this problem (and could have stayed up longer for effect).

As well as the impressive ensemble of actors, the backbone of the show is the music of Conor Mitchell (who also composed for The Moot Virginity of Catherine of Aragon). Played on piano for the entirety of the show, Gareth Wyn Griffiths is brilliant in conjuring up the many moods evoked in the score. It’s a giddy mix of vaudeville, minimalism, country and even smatterings of the Avant-Garde. We as an audience were blessed not to have too many songs thrown at us, since the score itself ties the show beautifully together. Even the actors all have a go at playing a cello, an accordion, a banjo and percussion. Proving just how multi talented they are!

There are a few rowdy and funny moments, so I won’t spoil them here and just tell you to merrily make your way to the Sherman this Christmas time.

The Wind in the Willows continues at Sherman Theatre till 30th December 2017.

Xmas shows at Sherman Theatre in 2018 shall be Alice in Wonderland & Little Red Riding Hood.

REVIEW: How My Light Is Spent @ Sherman Theatre

Want to make a difference in your local community? UpRising are calling out to ambitious 19-25 year olds in Cardiff!