As the crowd jumped and the excitement rapidly built to the sound NWA’s Straight Outta Compton, arguably the most talented lyricist of the New York 90s hip hop scene waited in the wings of Cardiff’s coolest and (on this occasion, at least) luckiest venue, Clwb Ifor Bach. Always exceeding expectations when delivering big, alternative names in an intimate setting, this was certainly no exception. Even watching World Champion DJ Boogie Blind, alongside the talented DJ Kamron, warm up his decks with a raw freestyle still left me questioning whether I was dreaming or not. But sure enough, the stars had aligned, booking agents proudly wore Cheshire-Cat grins, and fresh from Croatia’s Soundwave festival, Pharoahe Monch took the stage to a euphoric roar from his die-hard Welsh (and further-travelled English) following.

To describe myself as a mega-fan would be unprofessional, but I’m happy to put my cards on the table and reveal that I’ve paid more, travelled further and queued longer to see acts I rate half as much. Sadly, either the venue suffered from lack of stature needed to attract big crowds, or the tour’s marketing strategy fell slightly under the radar, but the event was far from sold-out, and looked frighteningly quiet in the immediate build-up. I was braced for an apologetic show of support with less than half an hour to go, but almost instantly the bar queues disappeared into the top floor with an energy and excitement I haven’t seen since Akala performed on the same stage, last December.

To no-one’s surprise Pharoahe greeted the screaming front rows with wild passion and focus, opening his set in the form of a moving tribute to the legendary Nate Dogg and covering a couple of classic hooks from where he once took inspiration as an aspiring artist. He wasted no time with unnecessary introductions before launching into Simon Says, his most widely-recognised track and staple of the early 00s house party scene (I know what you’re thinking, but trust me – just Google it…).

While Pharoahe‘s name is undoubtedly worthy of the biggest platforms in music, Clwb’s top floor offered the perfect mix of intimacy, familiarity, and ultimately created a unique music experience which wouldn’t have been possible to replicate at the Motorpoint Arena. Pharoahe used this to great affect by interspersing his music with skits, jokes and anecdotes; not to mention the interaction with his new and loyal fans, which culminated in a lucky young lady throwing some heavy shapes on stage and possibly capturing the freshest profile picture of our time with the man himself. 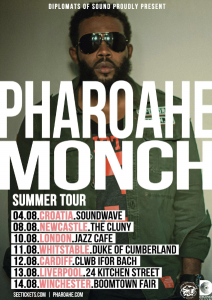 Pharaoh has never soared as high as some of his more mainstream contemporaries, but always attracted a steady flow of admiration for his skill and even recently saw a resurgence since his namecheck and steady flow of praise from Eminem in Rap God: “…king of the underground but I still rap like I’m on my Pharaoh Monch grind…”

As we approached the halfway point of the show, Pharoahe handed the stage to a fearsome solo by DJ Boogie Blind, an uncowering demonstration in how he had once been judged best in the world. With everyone in the room suitably hypnotised, it was a rare and humble showcase of the often-overlooked talent behind the headline MC. This allowed Pharoahe to set up the stage for Time, the hard-hitting and haunting opening track form 2014’s PTSD album, in which we follow his journey through personal battles to understand and regain his mental health. This was performed while stumbling and seated with a pistol to his temple as we watched the emotional turmoil play out with a tastefully-choreographed break down into the contemplation of suicide. Never one to shy away from taking a stance on important issues, I consider Pharoahe one of the few remaining socially-driven conscious rappers alongside the likes of Akala, Hopsin and Dead Prez.

Having said that, the evening was about entertainment and Pharoahe let his fun-loving sense of humour shine through at every opportunity with effortless segues into amusing encounters and performances with the likes of Busta Rhymes. There was never any danger of forgetting who graced the stage before me, but I was jolted several times by subtle reminders that I was surreally watching 90s East-coast rap royalty in the same room I begrundgingly celebrated New Year after clinically searching for the cheapest/still available tickets on offer the night before.

Hip hop has always been the most politically-charged music genre, particularly in the areas of race and opportunity. With our increasingly unstable political landscape, Pharoahe made this a central theme to the show with incredibly current and informed references on Brexit, Donald Trump and the recent spate of highly-publicised police killings across the Atlantic. Pharoahe talked about his upbringing and was strong on the message that violence will never solve anything. When understood in the context of a tough childhood in Queen’s, New York’s most notorious poverty-stricken borough, this proves an incredibly powerful conclusion. Ultimately, along with the music, humour and performance, I left the venue with seven particular words echoing in my head: we need more love in this world.

What Are Time Credits & How Do You Use Them?