Every so often a film comes along so polarising in opinion, it is thrust into the “no such thing as bad publicity” mailbox. Most recently this has gone to Mother!

Aronofsky is never one to shy away from some sobering issues. Pi, Requiem for a Dream and Black Swan have all raised his star to new heights. Yet it has taken Mother! to really push the boundaries of mainstream cinema, like David Lynch before him.

The marketing for this film has been untruthful. The main trailer turns the film into horror, which it is anything but. This is a film which gets into your skin and goes further into your bones. This stuff stays with you for days after…

The story can be interpreted in many ways. The camera loves Jennifer Lawrence as the title character. She is with Him, or Javier Bardem, a writer who adores her, yet asks so much of her. As they attempt to renovate their recently burnt home, they are frequented by visitors. At first strangers Ed Harris as Man and shortly after Michelle Pfeiffer as Women begin to become part of the house.

With no real intention of leaving, Man’s health begins to worsen and along with the return of his two sons (Brian and Domhnall Gleeson) who bicker over what’s been left in their father’s will. Tragedy strikes and the house soon becomes infected with people, an unrelenting amount of visitors who have now come to mourn the death of the elder brother, but then to pay respects to Him, on his masterwork, his latest book of poetry.

The film’s third act swiftly becomes a hair-raising, stomach-turning, provoking encounter. You realise the film has no leaning in reality anymore the longer you watch (my own Mother thought they were all ghosts, before vacating the cinema prematurely). Mother becomes pregnant and what happens to the baby is best left unsaid on here. Rosemary’s Baby is an easy fallback for the themes of this film and there are smatterings of Rebecca and even Children of Men. It is an intense experience, and you will need time to recover being after viewing. 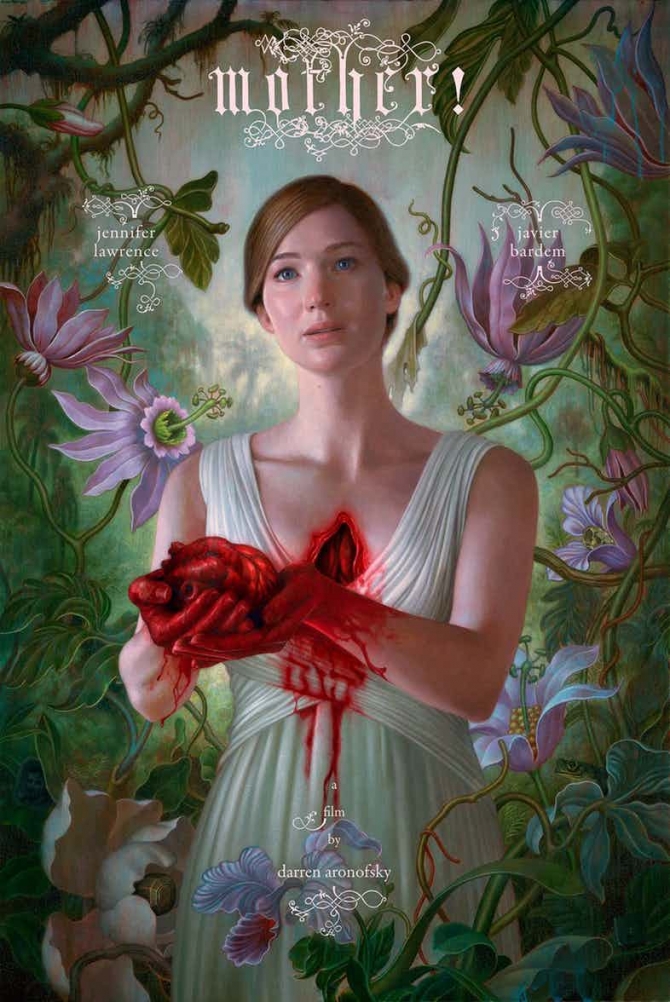 Discussions on the meaning of Mother! have been rampant. Is it a biblical parable? A statement on humanity versus the environment? A battle of the sexes? Or a bold statement on marriage? It’s these things and more, though the Bible does seem to predominate the themes. It’s easy to see Him as a satanic influence and Mother as Eve or even Mary. His forcing into her chest at the end evokes Mexican folklore and the plunking out of hearts ends the film on its unexpected spiral.

Performances shall be award-winning. Jennifer Lawrence features predominantly, yet we see so much of her fears, concerns and eventual shock with horror at what goes on. Her going into labour is very convincing and is one of many moments where she shines. Bardem is naive yet strong in his artistic journey, the poet who can’t find the words only to relish the thought of having strangers in the house. The supporting cast are also brilliant, with Pfeiffer on top form as the nosey, curt, overstayer who plays on Mother‘s thoughts of having a child.

This whole film has an exceptional feel to it. This should be seen by as many people as possible, even with all the half-baked press.

This is not easy viewing, but it shall remain one of the best films of the year.

A firm recommendation and an open mind is essential.

A whirlwind of cinematic bombardment.

Mother! is now playing at selected cinemas. All images from Mother! Facebook page.