It was a mysterious trailer: a woman burning some flowers. What could it mean?

However, we can now reveal all- within reason, of course. No spoilers here!

Hedda Gabler is a play about a spoilt young woman, a self professed member of the bourgeoise. She’s the hottest girl in town and she knows it- so why has she married the geeky young academic, whose main passion is chasing knowledge, old documents, and perhaps tenure as a professor? Old suitors pass through the house. Will they succeed in seducing the General’s daughter? Or will she brandish her old man’s pistols?

With so little to worry about in her life, as every first-worlder knows, Hedda ends up inventing some problems of her own.

This is a high end Sherman production utilising the main stage. A packed out theatre for opening night that attracted many of the great and good of the Cardiff creative scene. The show’s musical score was diverse, from entrancing tones keeping the audience hooked to that great tune Caravan Palace’s Lone Digger. There are even one or two sonic treats that had us jumping from our seats.

The seminal Richard Mylan (of Killology and the Cherry Orchard fame) appears as the menacing Judge- a man of the law. Mylan’s character is not far from his twisted Mark Zuckerberg- like figure in Killology.

Alex Riley, who appeared in How My Light Is Spent and alongside Mylan in the Cherry Orchard, also gives a similar performance to her previous.

Putting a strong actor and actress as secondary characters to the leading couple by Marc Antolin and Heledd Gwynn may seem like a strange choice. But I believe that Mylan and Riley are best in those particular kinds of roles.

Gwynn is great as Hedda; cold, calculated… maybe a killer? Antolin as her new and over-excited, eager to please husband garners the audience’s sympathy- but is he just pigeonholing his wife, so as to make himself seem like the big man? In this way the play reminds me of the great movie Gone Girl- it may require repeat attendance to get a real feeling for how you see the many multifaceted characters.

Hedda’s waiting for you to see her until 2 Nov. 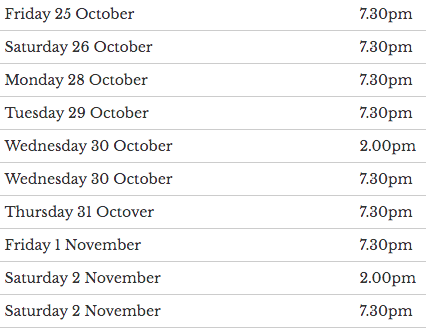 #YourShout: Nominate Someone For An Inspire Award!