“Stamps are the future”

Running a little late due to traffic, I had a message from Monstrous Productions Theatre Company to check if I was still coming: this made it more personal before the show. We had missed the first 5 minutes, even though they held off the start for a bit due to people being late. The show had started and I was intrigued by the set up with one desk and chair with the three men on stage, I enjoyed how close they had cast the actors with similar looks to the ones from the film.

I loved the humor that was in the show between the cast members some of which was like in the film, for example:

And others from adlibbing. There were a few differences in how the storyline played out that were noticeable, which I actually found worked better in some regards to putting more into the show.

I had previously seen Nightwatch and loved it, it was an amazing rendition of the book. Just like that show, with Going Postal, you have to rely on your own imagination as there are minimal props used and you are kept intrigued while the cast are switching around sets (which is perfect for this type of show, in my opinion). 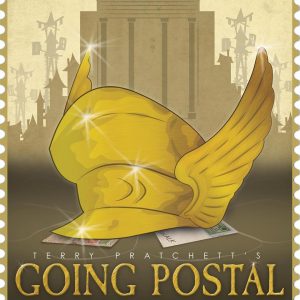 I thought it was brilliant when Mr Pump “found” the postmaster’s hat instead of Mr Groat like in the film, also I found it emotionally powering when Mr Lipwig put on the hat and could “hear” the letters calling out to him and even made me tear up when he knew the post office was burning because he could hear the cries of the burning letters even without the hat on.

I enjoyed it when Mr Pump then showed he actually can tell a lie, when he goes to hit Stanley to protect Mr Lipwig, but instead ends up just holding his hand up above his head.

The humor between Moist Von Lipwig and other characters was great fun, like when he stopped Stanley from going on a stamp speech as he was so excited to go from his collection of pins to stamps. I also enjoyed it especially when Mrs Maccalariat came in and mentions how worried she was about the golem who was cleaning the female bathroom, with which she wanted him to be called a her instead.

Also there was the humor between Lipwig and Vetinari at the start about how he was a con man and thief yet he was being given the job of postmaster, there was also the humor and banter between Mr Lipwig and Adora Belle when Lipwig was trying to woo her but many a time failed, yet he never gave up.

I’ll admit after the interlude it did get more difficult to fully enjoy the show due to the heat of the room and honestly I don’t know how the cast were coping, with some of the costumes that must have made them feel very hot. All in all, they managed to pull of a pretty great show and yet another fun filled rendition of the book.

I even enjoyed a little bit of banter with the staff about the other shows, actor differences and characters. I even enjoyed discussing how I would absolutely love to see my favourite played out (Hogfather).