The experience of Green Man festival was, for me, a new frontier, as I was not just reviewing this festival but my first ever festival.

Yes, I had been to the odd daytime event, from small village show to city-wide carnivals, but there was always a sense of disconnect as though I were only stepping a toe into the atmosphere not breathing it into myself wholly. I had never dedicated more than a couple of hours to a festival; and having always been the kind of person to immediately choose nice hotels with warm showers over any kind of outdoor accommodation, sleeping there overnight or a whole weekend was completely out of the question to a younger me.

However, when I was offered to go, I decided that this would be a personal mission, to ‘be’ at the festival and give my all to the experience, for better or worse.

[Sub-Editor’s note: Want to review amazing opportunities like this? Join the Sprout Editorial Group on Facebook or email tom@thesprout.co.uk.]

So you can see, there was a lot to live up to. Green Man was going to be the foundation on which all my future impressions and biases would be based. I had to stack the dice a little in my favour, and since I had two tickets, my companion on this expedition would have to be someone well-versed in the culture of festivals, and I could think of no one better than my friend Vincent. He is a veteran of the party and festival scene whose moves on the dancefloor were “world famous in Cardiff”. He’ll be my guide into this yet alien world, teaching me the rules and etiquette of the scene. On arrival, I knew this was the right man when it came to experiencing a festival; with our blow-up tent with porch, blow-up mattress, rented cart and two (slightly over-packed) suitcases, we were going to camp in style. And so, on the Friday afternoon (the second day of the festival), I stepped into Green Man with my best foot forward.

“Walking around Green Man, you get a sense of meditative relaxation, more like a commune where people come to just be in a world separate from the usual stresses” 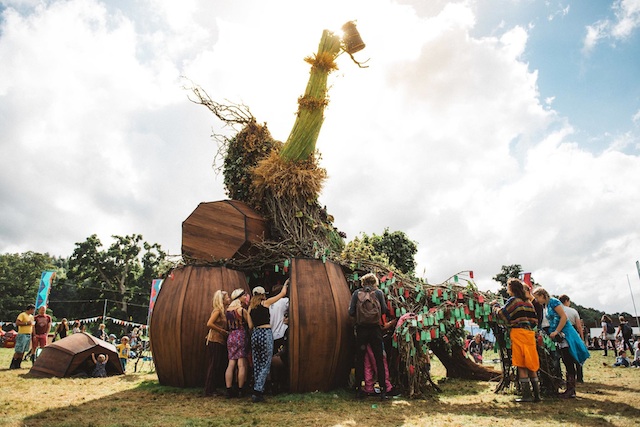 Pre-conceptions are a funny thing, even though you are fully aware of how someone is set up and all the stories people tell you, it’s only experience that can completely alter an image of something you have in your mind. On some level, even though it flies in the face of what I had been told about a festival like Green Man, the image I had of a festival was one of a giant party, where there are only stages where people are crowded together trying to see acts and little else. I though it’d be more like a number of concerts that are all just coinciding with each other and that the kind of people who attend would be, for the most part, around my age (I’m 24, just so you know)… looking for the same sense of sensory oblivion that most want to experience when going on a club night out.

In this, I am happy to say, I am wrong. Walking around Green Man, you get a sense of meditative relaxation, more like a commune where people come to just be in a world separate from the usual stresses and chaos of the everyday. I couldn’t believe how many children and families I was seeing; there was absolutely no sense of exclusionism, the only pre-requisite being that you relate to an atmosphere of serenity. This was definitely the place for me. 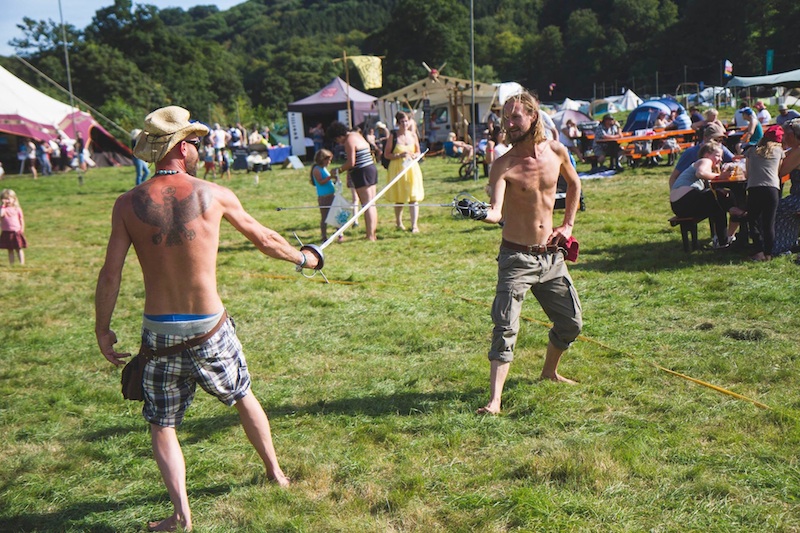 So, it’s probably a good idea that I start talking about the acts, yes? Since we had arrived and set up camp quite late in the afternoon on the Friday and I needed to get to grips with how a festival is, we decided to approach the shows going on that day with more of a sense of overview, drifting from one act to the other and soaking in the vibe of the festival as a whole.

Our first actual stop was at the Green Man Rising stage, where we watched ‘Oh Sister‘, a local Welsh group, perform some folk songs, which held our attentions but only for a short while. Then, we decided to eat, and whilst tucking into a much-needed seafood paella, we enjoyed the very cool, very soulful country singer, Jason Isbell at the Main Stage. I don’t ever recollect having seen a true country/Western singer perform live, and there is something quite novel about it. Listening to him perform with a mountainscape behind him and, between each song, him talking about his life and struggles and how they relate to his music, it felt unreal, like I would look him up when I got home and find that he’s not a true Southern country singer but an impressionist from Bromley who’s just a great performer. But that is in no way to diminish the quality of his music, it was novel but still very cool. 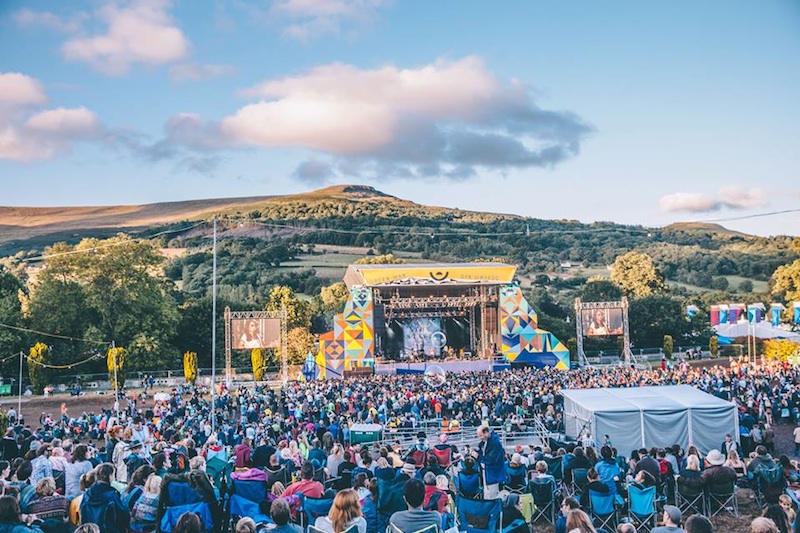 “On at least one occasion, we tried to leave and ended up getting brought back by the next song”

What we saw next was something very different: a curious act called ‘Loose Meat’, a techno-disco duo act that the programme describe as a “heady, sparkling display of Avant-dance”. That description can’t be faulted. It was hard not to keep watching them as there was something very surreal and hypnotic about how they performed. I can’t say that their music is what I’d naturally listen to normally but it was hard to draw away from. On at least one occasion, we tried to leave and ended up getting brought back by the next song. The only moment that broke this trance was an unfortunate but funny moment when the lead vocalist, Kristen Craig Robinson tried to rouse the audience to applaud her fellow performer. There was such a strange vibe as the audience got confused and didn’t quite understand what she was asking, leading to a mildly awkward moment. But, this does not take away from how strange the whole experience was. And trust me, this was very much the act… I had only had one very ginger mojito that night (another new discovery that I shall be taking back with me)! 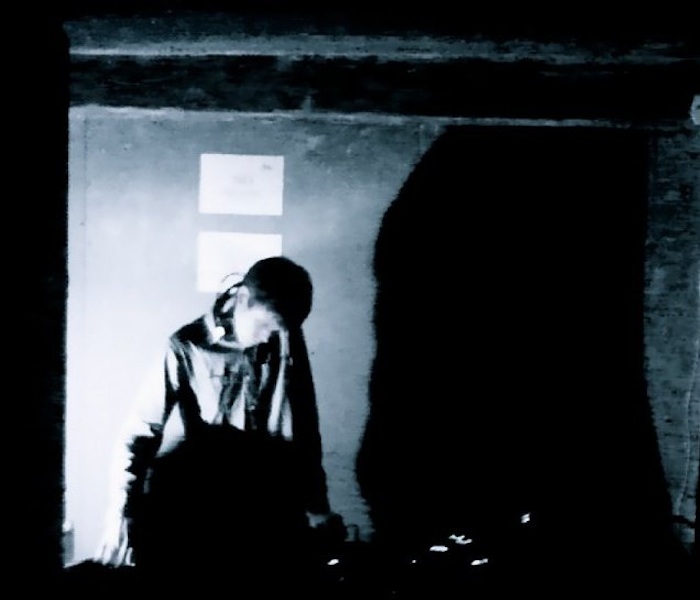 I don’t think that it was until we saw our first headliner act that I found a foothold and fully accepted the world into which I had been introduced. James Blake performed incredibly and, in those terms, it’s hard to talk about him. His songs were incredible and he was an amazing showman. I can’t pretend to know his music better than the times he’s popped onto my radio, but I quickly developed a taste for his style, though it’s very clear there are two versions of his music: the lilting vocalist and the master of techno-synthetic manipulation. Personally, I would lean towards the simpler vocal and acoustic side, but one thing you cannot criticise is his abilities; the complex layering and co-ordinated sampling used whilst he is still performing to the crowd are something to behold.

I must confess at this point, being the first night, we were already deciding to retire early (if you call 2am early usually!), but the settling into the festival had started to tire me out. Thus, having had a fairly early night and consequently an early start, I had the intention that Saturday would have a bit more drive to it. After a breakfast consisting of white chocolate and raspberries, then a quick meet up with the lovely Green Man media team, we got down to business… or so we thought…

Stephen Fry In The ‘Diff – Mythos