Another gloriously warm evening in Cardiff to be spent in another boiling hot theatre space with spectators fanning themselves with their programs. It was in a part of Cardiff that I have not seen since my college days, almost five years ago now that I come to think about it. In the Parade near City Road and the Cardiff and Vale College. Only things have changed since last I was there.

The tower block that once housed part of the College now houses student accommodation and the Shot in the Dark coffee house is now I Giardini of Sorrento. But I have returned to the Parade not to mark the passage of time but to walk down East Grove, something that I had strangely enough never done in all my time in College, to find the Cardiff YMCA.

For tonight I am reviewing Act One’s new production, Playhouse Creatures by April de Angelis. It is a performance that I am hotly anticipating, being a veteran of student theatre productions from my time as a member of Aberystwyth University’s Nomadic Players Society, but I become somewhat apprehensive when I approach the front desk and they direct me towards a narrow staircase.

Two flights up however my worries are discouraged when I come upon the theatre space itself. A charming little cubby-hole, very intimate and secretive. I sit down and as I wait for the lights to dim I once again look over my program for details of what I am to expect. 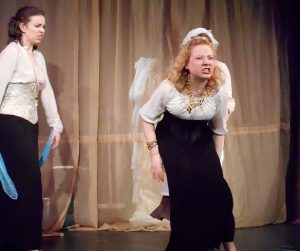 The play, Playhouse Creatures, is a comedic drama set in the 1670s during the Restoration when at the proclamation of Bonny King Charles II, the very first female players were allowed upon the stage, becoming pioneers of their age. The play opens with the elderly character of Doll calmly knitting away and recalling how the Playhouse in which she now works had once been a bear-baiting pit.

After this brief prologue we are in turn introduced to our other main characters of Mrs. Betterton, Mrs. Marshall, Mrs. Farley and young Nell (a character based upon real-life folk heroine Nell Gwyn who would become a Mistress to King Charles II and bear him several illegitimate heirs). Young Nell is of course the focus of our story as she goes from rags to riches, starting her working life as a bar girl before becoming one of the most celebrated actresses of her time.

But hers is not an easy rise, nor is it easy for any of the other actresses who must contend with poor costumes, rowdy and jealous male patrons and other prejudicial handicaps. What surprises this reviewer was the play dealt with these feminist issues by using some remarkably witty and funny one-liners, such as when Mrs. Betterton is trying to teach Nell about vocabulary.

“Mouth wide open. A girl can go very far in the theatre with an open mouth.“

But whilst this play does have humour it also has plenty of pathos; and this comes in buckets-full in the second act with Mrs. Marshall being accused of witchcraft, Mrs. Farley becoming pregnant out of wedlock and dying after a failed attempt at backstreet abortion, and then finally Mrs. Betterton being asked to step aside for younger talent, despite the fact that she is still a seasoned performer.

Another remarkable trait about this is its ability to make us sympathise with those characters whom we are at first bereft of sympathy due to their poor treatment of Nell. But this is something that de Angelis is also able to achieve in reverse with the character of Mrs. Barry whose story is told apart from the main action of the play.

Mrs. Barry is an impressionable young woman desperate to become an actress and command the stage and the love of the punters. It is something that she prays and hopes for by hanging around back-stage in the actresses dressing room when they are not around (the first hanger-on in theatre history). She gains her wish with the help and patronage of the Earl of Rochester. 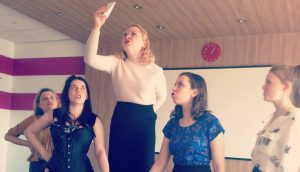 The cast of Playhouse Creatures in rehearsal.

At the play’s climax however she has become a cold and unforgiving woman concerned only with the money she now earns as an actress, being also completely unsympathetic to the Earl who is now suffering through a slow and agonizing death from alcohol poisoning. And thus our sympathy for her is reversed.

It is the same for the others, in particularly for Mrs. Bebberton who recalls with fond memories how it was when she and her husband used to play the (male) theatre parts together, then recalling coldly how unfulfilled she felt when the actresses were allowed on stage and shamefully consigned solely to play the parts of weak feeble minded women like Hamlet’s Ophelia or murderous she-devils like Lady Macbeth.

“Playhouse creatures they called you, like you were animals.“

Upon completion of the play which the student cast, devotees to their performance and their art, have brought to life with stunning alacrity and fun. We are left with a gentle reminder of what the play had been trying to tell us on a subliminal level the entire time. They ask for donations for Women’s Aid and I am glad to fish through my pockets for whatever meagre change I have to give.

But the point is simple. Between the actresses of today and yester-year how much has actually changed. Not much. Like the women of the 1670s the actresses of today are indeed well-paid and well-loved, but how often is it that an actress finds fame, fortune and critical acclaim unless it is through either sexualising themselves like Margot Robbie in The Wolf of Wall Street; or playing victims of unspeakable trauma like Jodie Comer in Thirteen?

It is a point worth pondering over as I walk back to the bus stop through the cool night air.