It should come as no surprise to anyone familiar with Dahl’s adult fiction to notice that it is littered throughout with moments of the most grotesque, macabre and disturbing black humour. But that was one of Dahl’s greatest gifts: always being able to see both the comic and the tragic side of any situation.

Dahl was always very aware of this grotesque side and often relished in it, even acknowledging it freely, saying in a letter to film producer, William Dozier as to why he was turning down the chance to script the crime thriller, 10 Rillington Place that “a macabre story, if it shall be successful, must have a quality about it that makes one smile at the same time that it makes one wriggle.”

But this very notably was not just confined to his adult fiction. There are plenty of instances in his children’s stories where his macabre side breaks through, like when Mr. Fox has his tale shot off by farmer Bean, who later uses it as a tie in Fantastic Mr. Fox, or Mrs. Twit dropping her glass eye in her husband’s beer as a prank in The Twits, or the unfortunate children in Charlie and the Chocolate Factory, whom Dahl dispatches with a malign relish. 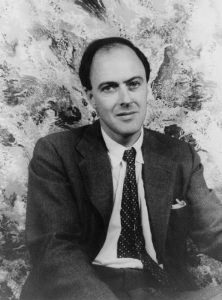 Such oddities were well in keeping with Dahl himself, who even kept a “cabinet of curiosities”, the contents of which included such unsavoury items as a removed femur head, a vial of spinal fluid and a prosthetic steel limb from a failed hip replacement. Such obsession with all things macabre only naturally seeped through more prominently during his adult stories.

That is not to say however that humour didn’t play a large part in his adult stories as well. But Dahl was always careful to draw a fine line between what was and wasn’t funny, once remarking that: “If a bucket of paint falls on a man’s head, that’s funny. If the bucket fractures his skull and kills him at the same time, that’s not funny, that’s tragic.”

If a bucket of paint drops on a man’s head, that’s funny, but not if it cracks his skull open.

Of the dozens of short stories that he wrote between 1942 and 1988, the most notable and memorable of them are the ones included in his collections, Someone Like You and Kiss, Kiss, most of which were later adapted for the classic anthology show, Tales of the Unexpected, which was hosted by Dahl himself for it’s first three seasons.

Among the classics are the grotesque horrors, like The Landlady, where a young man suspects that the lady in charge of the B&B at which he is staying has a hobby of human embalming, and Royal Jelly, where a keen apiculturist (bee-keeper) ends up feeding himself and his infant baby on a diet of said royal jelly with dire consequences.

Other themes covered in his stories are the extreme dangers of gambling like in A Man from the South, where an American sailor is wagered a Rolls Royce in exchange for his left little finger by a South American don; or the tragic tale of Mr Botibol in Dip in the Pool, whose extreme methods in trying to reverse his crippling gambling losses while betting on a cruise ship’s pool get him more than he bargained for.

Elsewhere, Dahl could find inspiration in the simplest of things, whether it be recalling a near escape with a deadly snake for Poison, probably one of his most suspenseful stories of all time; or the off-hand comments of fellow writer and friend, Ian Fleming about a poorly-cooked leg of lamb, giving Dahl the direct inspiration for the most unlikely of murder weapon’s in Lamb to the Slaughter.

Elsewhere, Dahl’s fascination with the witty, tongue-in-cheek humour in some of the more lurid sex novels of the day would lead him into tales of the more ludicrous. Like the sexually-repressed vicar of a spinster-heavy parish who believes woman are out to eat him in Georgy Porgy; or the vivacious wife of a newspaper baron whose sexual indiscretions lead her into a unfortunate situation in the subtlety titled Neck.

Very occasionally, Dahl’s stories would lead him into brief flirtations with very different genres, including brief forays into the realms of science-fiction, with stories like The Sound Machine, where a scientist develops a machine that can hear every time a flower screams when it is torn away from it’s stem: or the morbidly delicious William and Mary, where a husband’s efforts to live on after death offer his long-suffering wife the chance for her long-awaited revenge.

The inhuman screams of a flower stem and a husband who survives bodily death but not as he would have liked.

And, of course, every now and then, Dahl was not afraid to stray into the realms of historical non-fiction, though without us knowing it until the very last minute, leading him to produce a literary master-stroke with Genesis and Catastrophe, a story about an Austrian mother who vows that her newborn baby shall live no matter what, unbeknownst as to what the boy will become.

In all of these cases and many more, Dahl has shown his own remarkable flare and literary genius. His adult short stories have inspired works by other internationally-renowned artists, some of whom he could claim to have known personally, like Alfred Hitchcock, Ian Fleming and even Quentin Tarantino.

He was, without doubt, a master of suspense, a master of the macabre, a master of darkly comic humour and, above all else, a master story-teller overall. The world would be a far less interesting place if not for him as a constant and reassuring source of inspiration.

Want to become a reviewer or reporter? Join the Sprout Editorial Group on Facebook or emailtom@thesprout.co.uk.