When one looks back over the pantheon of classic children’s literature there are very few examples of authors within the genre who either managed to repeat their success on more than two occasions, like A. A. Milne with Winnie the Pooh; or whose work is not mired in speculative controversy, like Lewis Carroll with Alice in Wonderland.

But Roald Dahl, being a writer of such immaculate wit and childish humour, not only managed repeated successes in the genre over a thirty year period but also managed the remarkable feat of being as popular today, with both children and adults, as he was fifty years ago when his first classic, James and the Giant Peach was published to rave reviews in 1961.

Dahl is just as popular today as he was fifty years ago.

And yet to what would Dahl himself have attributed his continued success? Is it because his books are constantly being made into popular films? Is it the instantly recognisable illustrations of the uniquely talented Quentin Blake, whose work continues to admonish the covers of children’s books even to this day?

These are no doubt contributing factors. But the biggest of all these is, I believe, the very simple fact that Dahl was a master craftsmen when it came to telling stories and has received continued critical acclaim for both his children’s books and his adult short stories (which I intend to cover in another article).

Dahl once said in an interview that “my lucky thing is that I laugh at exactly the same jokes that children laugh at and that’s one reason why I’m able to do it.” This was no doubt one of his biggest advantages in writing stories for children as well as his ability to emphasise with them.

When it came to writing children’s stories Dahl once said that “it starts always with a tiny little seed of an idea”; sometimes that seed could come from any little thing in his surroundings, like a great oak tree in his garden or the Gypsy caravan that he occasionally used to write in providing the initial germs for Fantastic Mr. Fox and Danny the Champion of the World respectively.

Dahl’s greatest recurring theme throughout most of his children’s stories was the intelligent underdog (often a child in the form of a Dickensian orphan) outsmarting their dim-witted over lords (often some authoritarian figure like a teacher). This is definitely the case in stories like James and the Giant Peach and The BFG, where antagonists take the form of neglectful or cruel guardians and sadistic teachers. 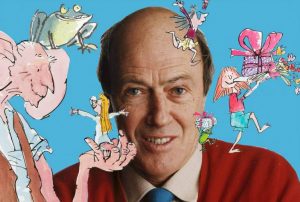 Dahl’s imagination was by no means limited to just his childhood memories. His passion for all creatures great and small would lead him to use them as sympathetic protagonists. Like the Muggle-Wump monkeys in The Twits who must try and outwit the viciously stupid Mr and Mrs Twit, or Mr. Fox who must outwit the inept farmers Boggis, Bunce and Bean in Fantastic Mr. Fox.

Though Dahl sympathised with children he knew that they could be brutes as well.

And although the underdogs were often children, because in Dahl’s case he found that he could sympathise with them more, that wasn’t to say that he didn’t know that children could also prove themselves to be absolute brutes. Just think of the golden-ticket winners in Charlie and the Chocolate Factory whom Dahl dispatches with obvious macabre joy, one-by-one.

Elsewhere Dahl’s imaginative zeal in being able to come up with such flushbunkingly gloriumptious words like frobscottle or snozz-cumbers proved absolutely crucial in inventing the word-play of his favourite and probably most endearing character, The BFG, whose other main character Sophie was lovingly named by Dahl after his grand-daughter.

When it came to inventing words Dahl could be flushbunkingly gloriumptious.

Otherwise his ideas came from events in his own life, like his childhood or his exceptional travels all over the world. When Dahl writes about the skyscrapers of New York in James and the Giant Peach or the swamps in the African jungle in The Enormous Crocodile, one fully believes him because he has seen and understood it for himself.

Sometimes the best of Dahl’s stories have the simplest of plots. It didn’t always have to be a whiz-popping adventure; take Dahl’s last classic Esio Trot, where Mr. Hoppy’s plans to win the love of his neighbour Mrs. Silver through a simple use of reverse word play. A sleight of hands with her beloved tortoise Alfie still proves as endearing today to me as it was when first read to me as a child.

There is a well-known saying that goes like this: genius is simplicity. And when we read Dahl’s children’s stories we cannot help but relish in the simple joy of just how sophisticated a writer can be when he just keeps it simple. As Einstein said: “Any intelligent fool can make things bigger and more complex… It takes a touch of genius and a lot of courage to move in the opposite direction.”

Nowhere else can such perpetual joy be found except in reading these two books.

And nowhere else can such simple and perpetual joy be found than in reading two of what are no doubt the greatest of Dahl’s children’s stories and his own personal favourites, Matilda and Danny the Champion of the World. Both books are so heart heartbreakingly beautiful to read and experience first-hand for two very different reasons.

On the one hand there is the down-to-earth realism of Danny, the story itself and the wonderfully evocative way in which Dahl depicts the warm and loving relationship between father and son; and on the other hand there is the magic realism of Matilda a story that revels in the delights of many children’s fantasies of having special powers and teaching the grown-ups around them a lesson.

But in spite of such wonderfully imaginative stories and eccentric characters there are some even today who dismiss Dahl as nothing more than a raving mad fantasist, as a writer constantly looking to over-exaggerate every single detail in his books. If there are such people then I would like to direct their attention to a quote made by Dahl in one of his ideas books. It goes much like this: “I don’t lie. I merely make the truth a little more interesting… I don’t break my word – I merely bend it slightly.” In each and every one of these magical stories it is a comfort to know that in each case there was an element of truth to every single one of them.

Which means that the chocolate factory really did exist, as did that gypsy caravan, and that somewhere in the world there really are teachers as cruel as Miss Trunchbull or that somewhere high up in the sky beyond our reach there really is a place as beautiful and sublime as Dream Country.

Roald Dahl fan? There are celebrations all of this year to celebrate 100 years since the master story-teller’s birth. This includes the City of the Unexpected – “the biggest arts event ever to happen on the streets of Cardiff” – on 17-18th September… Deliberately few details have been released about it, but we hope to report on it from as many angles from possible!

If you’d like to be part of the reporting team, let us know below or email tom@thesprout.co.uk.

Want to become a reviewer or reporter? Join the Sprout Editorial Group on Facebook or email tom@thesprout.co.uk.

Free and Cheap things to do in Cardiff: 21-27 March

Free and Cheap Things to Do in Cardiff: 25-30 April- RawFfest edition