CARDIFF’S own Capital City Jazz Orchestra return to St David’s Hall on Thursday 9 March for another exciting evening of jazz and swing.

Plus, this time they are coming back with very special guest Bobby Shew! The internationally acclaimed American trumpeter’s CV reads like a who’s who of jazz over the last 50 years. 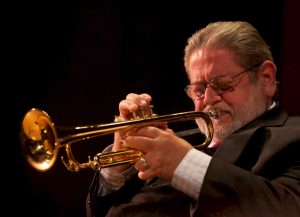 After leaving the Army, Bobby joined Tommy Dorsey’s band and then played with the Woody Herman and then the Buddy Rich Big Bands in the mid to late 1960s. In 1972, he moved from Las Vegas to Los Angeles where he did much studio work as well as play with some of the top big bands of the era culminating in the release of his masterpiece Telepathy in 1978.

The Capital City Jazz Orchestra was formed in 2007 to play once a month at Dempsey’s Jazz Club in Cardiff and have gone from strength to strength. Since then they have worked with iconic artists and appeared at International Jazz Festivals including Swansea and Brecon.