Dan45ist catches up with Rafael Gomes from Studio 2 Project @ Cathays Community Centre to hear how young people in Cardiff can get involved in making and recording music.

Since the age of 16 I have been a regular member of a community music project based in Llantwit Major called Major Music. It is a project that allows youths to rehearse and record music in a semi-professional recording space. I go there regularly every Tuesday and it is without doubt a highlight of my week. I can go there, chill out with friends as well as meeting new members, young kids fresh to music and who need a guiding light.

So when a few weeks back I was asked if I would like to take a trip down to Cathays Community Centre to take a look at their recording and rehearsal facilities and to do an interview with one of the group’s volunteers, I jumped at the chance. I got down there for the afternoon and was welcomed by one Rafael Gomes.

He showed me around the community centre. A very homely but nonetheless a very shabby and quite dilapidated space, but a dilapidation that had its own charm, a kind of cosy familiarity that identified with my sentimental nature. 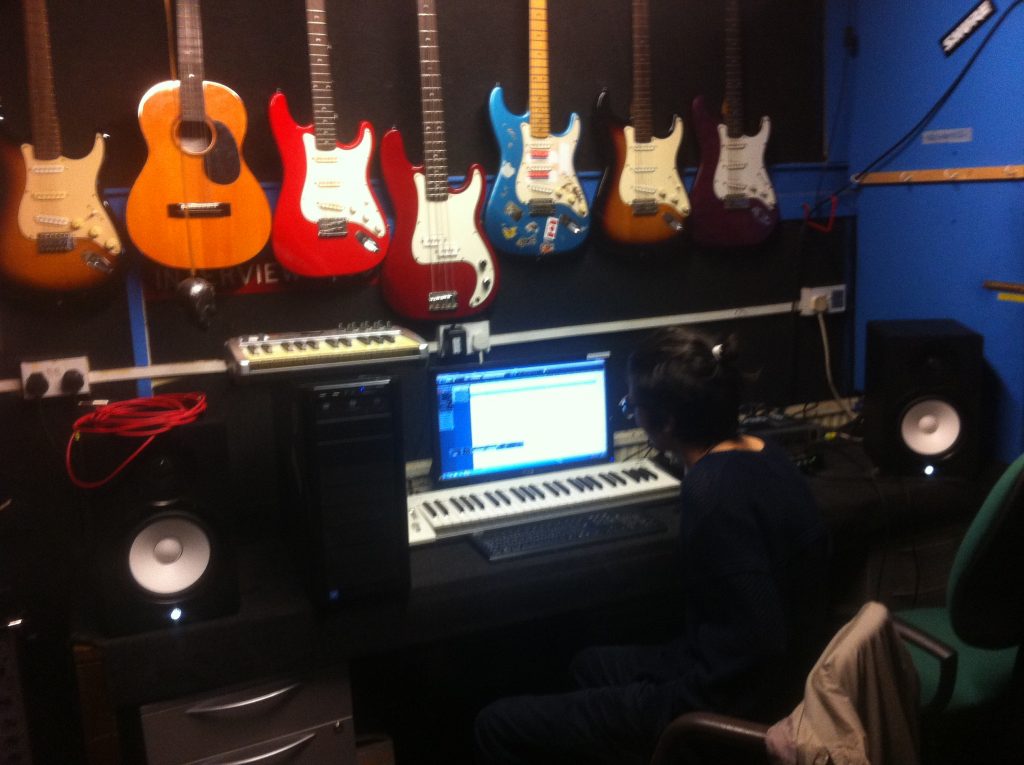 Based in the centre were two rehearsal spaces, both well equipped with drum kits and amps already set-up and ready to go. The recording studio itself was quite a tiny room. The walls, crammed with acoustic, electric and bass guitars, the vocal booth little more than a small cupboard tucked away in the corner of the room and a mixing desk that looked like it had been purposefully designed for none other than this very room, quite appropriately I thought too.

After the tour was over me and Rafael sat down at the mixing desk, getting ourselves comfortable whilst I set up the microphone for the interview.

What was the impetus behind the Studio 2 project?

The people who started the Studio 2 project were people who played in bands and struggled to find the opportunities and the facilities to record their own tracks at an affordable price. They thought it would be a great idea to create this place, not just for themselves but also for other people who are, or were, in the same situation as them, to have a volunteer run studio that records for affordable prices.

It’s a situation that goes both ways, the band that wants to record a track get to do so at an affordable price and the volunteers who are interested in the recording process, in sound engineering, production, etc., gain the valuable experience. That’s how it started really.

But over the years the young people started leaving this place and whilst we still have a few young people that attend our youth club now and then we’ve since tried to turn this studio into an open studio. So it’s still pretty much for young people but now we’re open to everyone and we try to keep it as cheap as possible, whilst at the same time still trying to attract the people like me that are studying music technology, so they can have the experience that they need. 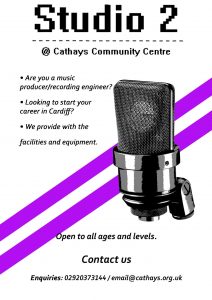 Whose idea was it that the studio should youth run and led?

I’m not sure who actually came up with the idea for this but Joel Beswick who was a member of one of those original bands that started this place. He still works here, he’s now in his twenties. But when they first started the youth music project I think he was eleven or twelve, I’m not too sure, but I know that he was part of that initial group that had that idea, the group itself was called Under Construction. They used to put up monthly gigs here at the Community Centre as well as running a festival in the summer in August. They ran the studio at first, since it was their idea.

What is your ultimate goal for the Studio 2 project and where do you hope to see yourselves in the next few years?

Well the ultimate goal is to improve our facilities so that the people that come here, the artists as well as the volunteers, have the best equipment available to them. For example in this last year we’ve used the money that the studio generates to acquire some new equipment, including a new interface which is a lot better than anything we’ve seen in the last five years.

We aim to make the studio as good as it can possibly be, but at the same time because we’re not looking to make profit we’re just trying to provide everyone with those opportunities. So let’s say in a couple of years time, probably when I leave for university or maybe going to find work, then I hope to have helped to train someone else so they can take over from me, but for that they need to be motivated to come in here. So the better the set up we have, the better equipment, the more they will want to come along and the more of a variety of options that they will have, the more they will learn and the better it will be for their CVs in the future.

So I think it’s a case that we want to keep this going for as long as possible, so people like me can have that opportunity to learn whilst providing young bands with that chance of recording their new music but at affordable prices. 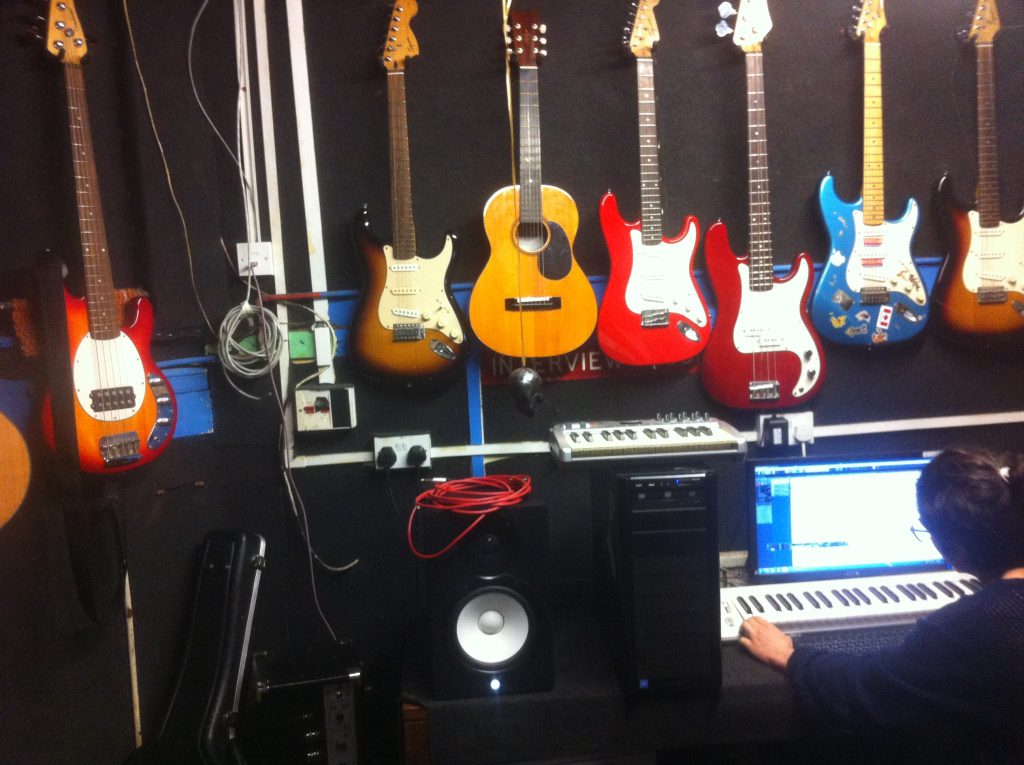 Now there are several other studio projects like this in Cardiff, specifically in places like Grangetown and Charles Street, so what in your view makes Studio 2 the better and therefore the more appealing alternative to those other projects?

Well this studio has now become a very open studio so there aren’t any specific hours that you’ll have. You can book the studio for any time you want to use, so you can just come down and just try and record yourself. Even if you don’t have a song, even if it’s just to learn how the software works just trying out the different things that you’ve read about but never had the chance to try out before now. You can do all that on your own here, obviously with our help at the start just to show you the hopes.

And that’s the beauty of having a very open studio because you can just book it any time that you want and maybe after a few months, once you feel comfortable enough with facilities and confident enough with your own abilities then you can bring in whoever you want, record them yourself, charge them your own rates even, making sure to pay the rate for the studio itself, which is £2.50 an hour.

So say if I was a young engineer and I was feeling comfortable enough to record someone and was looking to charge £5 an hour then I would have to charge them £7.50 an hour, and we are happy to let anyone come in and use the studio in that sense.

Are there any musical acts and artists who have come to the Studio 2 project whom you have helped to develop musically and are therefore proud of?

Yes there is one band who we’ve helped at this studio, well actually there are more than one, but the first one that come to my mind, they were here before I was here so it wasn’t me personally who helped it was more the organization who supported them by providing them with both the rehearsal space and recording space.

They’re a local Cardiff act called Junior Bill. They’re still going, they started off back in the day as a band called Inconsiderate Parking. Joel Beswick, who I mentioned earlier, he’s part of that band and he learned how to use the space and the software. Then he brought in his band and they learnt a lot whilst practicing and recording their songs and they ended up recording their first two EPs here. Since then they have campaigned for this community centre and for the Studio 2 project several times in what they’ve done since then because it has meant a lot to them.

And that’s been the case for a lot of other bands who have come through here, like I can name you another band called Sticks n Stones. Their line up is not the same as it used to be and they’ve since broken up, but each member of that group has since gone on to do their own projects with other bands. They wouldn’t have been able to get to that point if they hadn’t had the opportunities to learn their craft here.

Are there are any musical acts here then that you think we should keep a look out for in the very near future?

For more information about the Studio 2 project visit their new page.

For the audio version of this interview be sure to tune in to Radio Platfform on at 6pm on Saturday 13th May 2017.

Things to Do in Cardiff- February 2019

Movie critic in the making? Top tips to writing your very own show review.