Last night at the Donald Gordon Theatre in the Wales Millennium Centre here in Cardiff, the legendary Sir Van Morrison – also known as “Van the Man” to his fans – rocked the stage supporting the brand new Festival of Voice currently taking place across Cardiff.

The 70 year old Belfast legend performed for an hour and a half straight, playing mostly his classics songs like “Brown Eyed Girl” and “The Way Young Lovers Do”. The opening part of the gig, he was rocking his saxophone and his harmonica playing various instrumental songs, including having his band members showing off their unique skills with solos from the guitar, bass, drum and backup vocals. 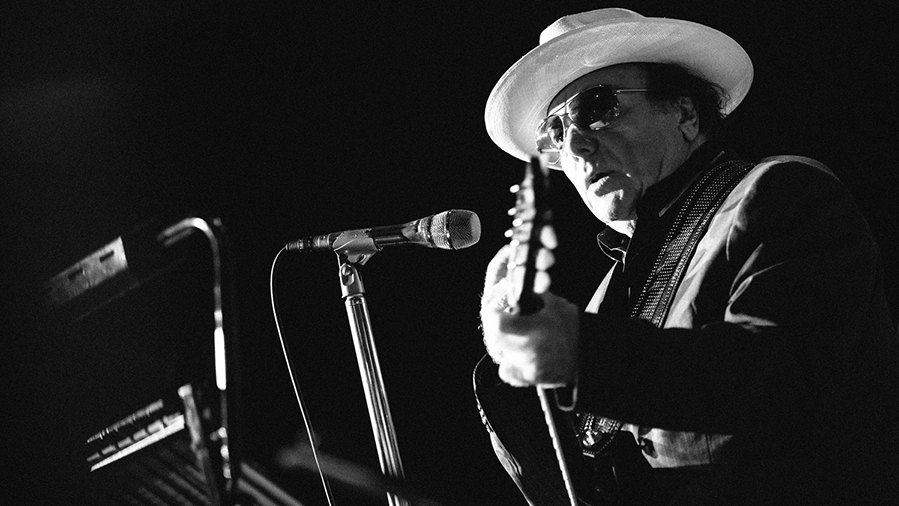 The stage setup of the show was very much like being in a jazz/blues club with a few spare acoustic/electric guitars on the side, two keyboards, a drum set and a few microphones. The tight proximity of the setup space also reflected on the chemistry between Van Morrison’s band, showing they work as a unit. Personally, it would be nice to have seen the guitarist showing off his bluesy, jazz solos facing the crowd as he spent the whole gig facing the drummer and Van Morrison. But that is just a fan’s point of view of course, as the whole attention is on Van Morrison.

Before the show, there were some rumours that “Van the Man” was going to cancel the show here in Cardiff since the recent passing away of his mother Violet who died in her 90s. He had to cancel two shows in Dresden Germany and apologised to devoted fans for the devastating loss of his beloved mother. Violet Morrison’s last public visit was at the knighting of her son at Buckingham Palace 4 months ago for his dedication to music and to charity. She declared that she was very happy for her son getting the knighthood of “Sir Van Morrison” and was very proud of him. Her funeral took place only two days ago with Van Morrison present and afterwards he came straight to Cardiff. In dedication to Violet Morrison, Sir Van performed two songs: “Days Like This” and “The Beauty of the Days Gone By” with special guest Welsh opera giant Bryn Terfel. What a collaboration!

Festival of the Voice is the first of its kind in Cardiff to promote the celebration and talent of voice from local to international artists. To have Van the Man coming to support this new project is truly something special and he is a legend in his own right.

My special recommendation for those 18+: to those who want to see a Van Morrison show, a glass of white fruity wine and Van Morrison music playing in the background, your night is sorted.

Coming up within the next few days are shows like John Grant, La Voix Humaine, Laura Mvula and many more so if you are into music and gigs check out the website which is:

There is so much to see! Please check it out!