Growing up is never easy. Ask anyone and they will tell you the woes of childhood, creeping into adulthood. It’s different for everyone, though there are telling similarities between us all. 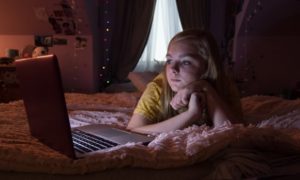 Comedian Bo Burnham knows a thing or two about viral success. Here in his directorial debut, he offers a telling portrayal of those intensely awkward years. At times feeling like a slice of real life, his script is filled with absurd dialogue from teenagers and the desperate, at times cringe worthy attempts of adults to connect with them (I scoffed when the Principal dabbed).

The performance of Elsie Fisher as Kayla Day is what makes this film so special: she utilises Burnham’s words with a highly relatable photo-realistic vision. We feel for her in her uneasy moments, with one right of passage after another throughout the film. Her advice on her YouTube channel paradoxes her real life encounters, though she does try and practice what she preaches.

Fisher is so real in these moments, we empathise because we went through similar endeavours: the crush at school, the desire to make more friends etc. The optimism she expresses through her videos makes her shine for the brief time she films them. Whilst her YouTube views are minimal, it’s the act of actually making the videos that creates catharsis for her in order to deal with the everyday. We see a brief moment of her playing cymbals as part of the terribly out-of-tune brass band. Perhaps this demonstrates her skill in being the loudest part of the players, yet also the most accessible, a statement about her as a person.

Some questions are left unanswered within the film. Where is her mother? Why did Olivia, her older helper in school leave her with a male friend? Would she really go through with sending a nude picture to her crush? Though perhaps not knowing makes the film more allusive. It’s refreshing to see a single dad (played by the fascinating Josh Hamilton) working through the trappings that come with a teenage daughter. The scene with an older boy making a pass at Kayla, is a heightened moment of unease, an issue which does not find resolution, nor do we see Olivia again, someone who should have looked out for Kayla. The extra sting is here is just how well Kayla and Olivia hit it off as friends, leading to her being introduced to her gang of friends.

The choice of music is also inspired. Mostly comprising of Anna Meredith, we also get a nostalgic trip from Enya, though the blasting club music is what pierces through the film adding absurd moments of soaring drama. One line stays with you though. She ends each video with “Gucci!” and does the Ok hand sign over her face, summing up the superficiality of being a YouTuber and also the branding which they choose to create for themselves.

Photo Credit: Sony, via The Guardian

Are you struggling with any of the issues depicted in Eighth Grade? Make sure to take a look at the Sprout Info section, or contact Meic.