Cardiff Independent Film Festival are looking for entries for their 2017 edition, with the deadline closing on the 13th of January 2017.

With a dedicated animation strand run by Cardiff Animation Nights, the festival is calling for entries of International Animated Shorts, Welsh Animated Shorts and Animated Student Films for its animation competition programme. 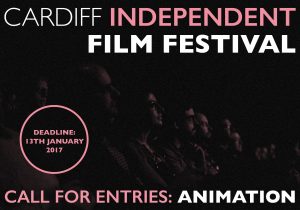 Cardiff Animation Nights runs bi-monthly screenings of award-winning independent animation from around the globe at venues in Cardiff. As well as their regular events and CIFF, CAN is planning a packed programme of events in both 2017 and 2018.

Established by the team from CAN in April, the first animation strand at the Cardiff Independent Film Festival screened a selection of animated shorts from across Europe, Asia, North America, South America and Australia. Conor Whelan’s 2D animated short ‘Snowfall’ won the 2016 animation competition programme, with a special mention for Simon Cartwright’s Manoman.

The Cardiff Independent Film Festival will take place on the 5th, 6th and 7th of May 2017 at the Chapter Arts Centre. For entry rules and submission requirements, visit the festival website here.

The Lonely Isle: Brexit, The EU & The Betrayal Of Wales

Don’t Feed The Trolls: How To Cope With Cyberbullying