This article was originally published on 16/11/2016 @ 16:03 by Sammy Sprout, republished today for Mental Health Awareness Week.

Alcohol: something, they say, that can make you feel a little more carefree; something that unleashes your “inner dancing queen”; and if drunk too much, something that gives you a little headache in the morning… yeah right. For me, alcohol has provided me with a soul-crushing lifetime hangover since before I can remember.

Alcohol has changed my life. Sometimes it’s ruined it, sometimes it’s “saved” me (calling the relationship break-up saviour here) and sometimes I’ve blamed it on every little bad thing that’s ever happened to me. Why might you ask? “Why?” has always been the question that fills my brain when the lights turn off at night, alcohol is why.

I’d be lying if I said that I didn’t enjoy a good tipple or two on the weekends; I even worked in a bar during my student days, however, the after-effects of a “few pints or two” have lasted more than the average hangover. Alcohol is the reason why my mind and the cliché heart on my sleeve have felt hung-over pretty much my whole entire life.

Growing up, I had a Mum and I had a ‘Dad’; however, he was two completely different people. My Dad, well, he was kind, he was intelligent and he had the social standings of a saint; that until he had a bottle or two of whisky down him and he turned into someone unrecognisable. He turned into the monster that only ever haunted my every living day.

It’s hard to think of a time when my father was ever sober. I guess, growing up, seeing him swig whatever “devils drink” he could get his hands on was pretty much the norm. Sometimes, it didn’t even necessarily make him a liability; alcohol, for some part, has given me the some of my favourite memories of him.

Like this one time, I came home from school and there was a flat-out full park in my garden (like a proper park!). He told me that he’d stolen the local park (which I may add was my absolute paradise as a child) and that everyone was going to be jealous of me. We spent that afternoon, until the early night swinging and sliding, until my mother started shouting, yelling at us to get in so that I could have a bath ready for school the next day.

Me being me, I believed that he’d stolen said park up until a few years ago. In hindsight, he actually just worked for the local council and he got given it before they threw it to the tip. But hey, that day will forever be my favourite day with him. With that said, there’ll always be something else in the background of that day that will always play a bigger part than me; that being the bottle of Bells that he couldn’t even put down to push me on the swing. Although, sometimes, there were “okay” times like this, alcohol will always find its way to tarnish every little good memory I have of him.

“Alcohol was his first love and we, his family, just simply fell short”

The bad stuff, well, that’s what gives me the lifetime hangover, however. I remember spending Father’s Day waiting for him to come home so that I could give him his present. I remember living off beans and toast because he’d spent all our money on drink. I remember the shouting, the fights, the erratic behaviour. I remember him battering my mother to a pulp and leaving her there, sometimes conscious, sometimes unconscious, bleeding, crying, surrounded by broken whisky bottles.

I remember my Dad spending Christmas Day falling into the tree because he was so blind drunk, “accidentally” burning the turkey because he’d passed out on the sofa with a heavy head of “alcoholic dutch courage”. I remember the cuts on his face from face-planting the pavement on his way home from the pub. I remember him spending every other minute not spent at the pub at the bottom of the garden in his shed (which us kids were banned from… who knows what he was doing).

I remember the broken promises, the empty whisky bottles and feeling like I’d never mean as much to him as his signature bottle of spirit. I remember his illness; that being that he spent his day, topping up the never-ending bottle of whisky, losing himself in the process. Alcohol was his first love and we, his family, just simply fell short.

“Eventually, I began to hate the man my father had become”

Eventually, I began to hate the man my father had become. The happy memories became few and far between and eventually, after years of living with an alcohol abuser, my mum decided to up and go.

Leaving a drunk that had made everyday a living hell; that was easy. Leaving the hope of ever getting my perfect, strong ‘daddy’ back; that was a different story. Everyone wants to have a father who cares.

Even with our newfound freedom, we still weren’t free of my father and his demons. He followed us. He’d sit outside my primary school threatening to kidnap us. More so, he’d threaten to kill himself and take us kids with him. He’d constantly phone. He’d sit in my back garden and watch us through the window. Police presence became the norm, his actions even more so. 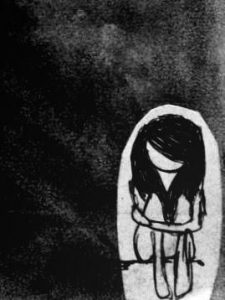 Alcohol had not only taken the idealistic father figure out of my family unit, it had taken his mental and physical health. My father became a shell of the man that once spent his afternoon pushing me on the swings. Alcohol had taken the only man that I ever wanted comfort from. I was no longer ‘daddy’s little princess’ and he was no longer my ‘King’. His kindness, his intelligence and his social standing of a saint had died; just with every little bit of respect I had for him.

Eventually, the endless phonecalls became fewer, I no longer saw him at the school gates waiting for me, Police Constable Kennedy [fake name] no longer spent his evenings playing Snakes & Ladders with me and my mum’s worries were non-existent. It was as if my father had got on the nearest freight train and disappeared before my very eyes. I didn’t quite mind that much though. I was happy to be away from the walking bottle of whisky.

To some extent anyway… you’re always going to want your parent to admit defeat and come running back to you. Every Christmas was still spent sitting on the bottom step of the stairs, opposite the door, waiting for him to come in and apologise for what he’d put us all through. Every birthday, I still expected that card through the front door and even at some points, I wanted him to be waiting at the school gate. He never showed, ever again.

“I guess my father had admitted defeat in the wrong way, letting his addictions kill him”

I waited for, I wanted, I needed and I expected him to show. Until my dreams were shattered on one very dark morning of September. I got up that morning and put my brand new Year 7 school uniform on to find out that my ‘dad’ had taken his own life. I was 11, my father just 37 years old. I guess my father had admitted defeat in the wrong way, letting his addictions kill him. That was the hard bit. The father that once spent his Sundays walking up the mountains with me, the one that took me to my ‘paradise’ park as a child; he was gone, alongside every hope of a happy reunion. Alcohol and his addictions were the main culprits, his lack of ability to speak to people was the second.

As a child, I used to think he was selfish. I used to think he was incredibly weak, but as I’ve grown older, I’ve opened my eyes wide to the thought of addiction and mental health struggles. My father wasn’t a monster, he wasn’t weak, he just needed that courage to open up and do something about the things that were tormenting him. He needed to admit he was ill, admit he was an addict and take responsibility for his actions.

I don’t know what made my father turn to drink, but what I do know is that it’s shaped me in more ways than I could ever imagine. My father will continue to be the biggest influence in my life; he’s shown me “what not to do” when it comes to living on this Earth.

People see alcohol addiction as something you can just stop. Like, you wake up one day and decide you’re not going to drink anymore. That you choose to bring down the people you love alongside you. My dad did choose drink, but I doubt he thought it would ever be the reason why he no longer shares this Earth with me or why sometimes, I cry myself to sleep at night.

Alcohol, for me, will always be the main reason why I cry on Father’s Day, why I feel a little jealous when I see people walking down the street hand-in-hand with their dads. Alcoholism is always going to be the reason why I’ve spent the last 23 birthdays without him. Whether he was out at the pub or whether they’ve been spent without him even living, alcohol addiction is always going to be the reason for his absence.

Alcohol is all well and good in small quantities, just please don’t let it take over your life like my father did. If you’re drifting off course, there is help out there and more so; there are people like me that wish you’d just speak out and get help before it’s too late. Don’t let anyone else go through this lifetime hungover like I am.

If you would like to talk to anyone about any of the issues raised in this article, please contact Meic, the national information, advice and advocacy helpline for 0-25’s in Wales. You can contact Meic for free by phone (080880 23456), text (84001), instant message (www.meic.cymru) or email (help@meic.cymru) between 8am and midnight.