An utterly moving a poignant piece of theatre, presented by an equally moving and talented cast.

On Thursday the 2nd of November, I was given the upmost privilege of seeing William Shakespeare’s Twelfth Night in the Royal Shakespeare Company’s theatre in Stratford-Upon-Avon (Shakespeare’s birthplace for those that don’t know.) An opening night of any performance is known to be especially good, but Christopher Luscombe’s cast has taken this custom to a new level.

Twelfth Night tells the tale of a pair of separated identical twins who somehow have ended up entangled in each other’s lives in later life. Through Viola and Sebastian’s troublesome and unintentionally menacing natures, Shakespeare manages to create an abundance of romantic and comedic catastrophe. With love triangles, homoerotic urges and cruel tricks, this production shocks both the body and mind. 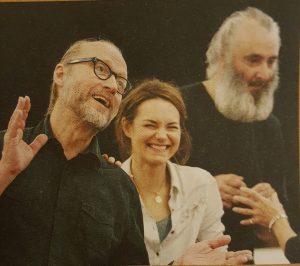 This production’s leading man, Adrian Edmondson (pictured on the left), carried the role of Marvolio with poise and passion and brought the character to life. His cheery songs, and also his more sincere moments of betrayal, were executed perfectly; showing off his years of experience in the business.

Furthermore, Dinta Gohil who played Viola (or Cesario to some) absolutely stole the show. Never have I witnessed such a mature actor beyond her years in any production and I only hope she goes on to star in further Shakespearean plays. John Hodgkinson, as well, who played Sir Toby Belch, was also so astonishing as an actor in this show; his love of theatre and all things Shakespeare shining through throughout the show. All in all, the cast of 18 were phenomenal and deserve the up-most praise. 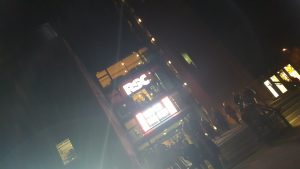 Twelfth Night is known by many as one of Shakespeare’s most musical plays. In this production, an ensemble of eight extremely talented musicians accompany the actors and move the story along between scenes. Musical director John Woolf has really done himself proud with the music in this show and has managed to serve the story well. 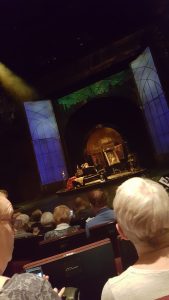 I personally cannot recommend this production enough. Its artistic integrity, accessibility and comedic value make it a show truly worth seeing. Please go and see Twelfth Night this theatrical season, you won’t regret it.

Photo Credits: Author’s own and facebook.com/thersc

Employment, Training & VolunteeringThings To Do

Movie critic in the making? Top tips to writing your very own show review.