Commemorations have been plentiful this year for the centenary of the Somme. This Remembrance Sunday was particularly poignant here as Cardiff University had arranged a weekend of symposiums, concerts and more. On the Saturday, a piano recital of war time music by Iwan Llewelyn-Jones had some lovely highlights including music by Max Reger and Scriabin, then ending with Debussy and Ravel. This free event was a welcoming addition to the weekend.

A talk on Propaganda in WW1, was our introduction to the remarkable footage seen from the Battle of the Somme. The speakers John Jewell, Toby Thacker and chair Jon Gower gave invaluable insights into the operation of Britain’s own propaganda machine, shortly after the war had begun. One lady’s question, regarding why so many working class men went to war and not so many middle/upper class men didn’t, was quickly quashed with facts, leaving the air a little blue for a brief time. 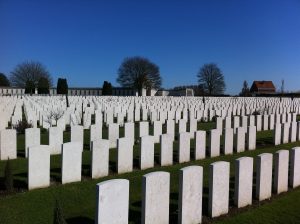 The importance of the footage taken by both Geoffrey Malins and John McDowell during the Battle of the Somme cannot be oversold. It remains as one of the vital film pieces ever created; an invaluable documentary resource. It’s very simple in its execution: point at subject, linger for a while and sometime pan to the left or right. There were no films school 100 years ago, such was its new fangled appeal. What is seen is however iconic and instantly reconcile: the troops going over the ridge, with one soldier sloping back down, shot dead, the huge mine blasting the earth in a terrifying moment of destruction etc. It is as gut wrenching now, as to when it was first captured on film.

To coincide with the screening, Cardiff University assembled its largest ever orchestra for the film score; Laura Rossi. It’s impressive and doesn’t fall into all of the trappings of reimagined film scores. Her orchestration was on point, with six flutes, two harps and heaps of brass. The utilising of the piano strings to depict far off bomb attacks was inspiring.

Nice to hear tubas more; in their drones and attacks as these disgustingly giant weapons of death are geared up, their targets acquired and then the awful blast we can only imagine for this silent film, brought to life in the score. The score is also not afraid to frolic along with the film in its many tangents. One scene was admiring the soldiers content and happy, marching off to fight. The next scene is a battle and then a serene depiction of the countryside of norther France. In short, the music is near perfect in its offering.

After this, there was a memorial service at St. John the Baptist Church featuring the Cardiff University Chamber Choir. I’m not one for church services, but this was a special event. From the reading of war poetry and songs by Novello and Parry and the disturbing arrangement of Wilfred Owen’s Anthem for Doomed Youth by De Lange; it was a lump in the throat highlight. We stumbled through awkward singing of hymns. Those that wanted to pray were also welcome.

The Battle of the Somme Film Screening Rating: 4 stars

An extended performance of Satie’s Vexations takes place around Cardiff starting in October till new year, as a fundraiser for OCD UK, with such venues as the Wales Millennium Centre, St. Edward’s Church (of Cardiff), the Cardiff Masonic Lodge and the YMCA as locations. We also need more musicians, venues, rap artists and artists in all fields to help to complete the piece. Follow #CardiffVexations on social media to see more!