The Changing Genders of Doctor Who

“I want to tell the fans not to be scared of my gender. This is a really exciting time and Doctor Who represents everything that’s exciting about change.” Jodie Whittaker

It was only a couple weeks ago that we were introduced to the fact that Jodie Whittaker shall be the next thespian to play Doctor Who. The actress most famous for her appearances in Black Mirror and her starring role in Broadchurch shall be taking over from Peter Capaldi at the end of 2017.

The announcement came at the end of the Wimbledon final and since then it has sent shock waves throughout the Doctor Who and sci-fi worlds. And whilst the majority of Doctor Who fans have taken the news well, there have been those who are somewhat displeased at this turn of events. 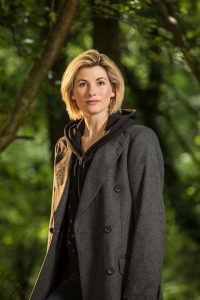 But before we get into the politics of it, a little history on the matter first. The idea of a female Doctor has been floating around the Doctor Who for many years. The first hint of it came during the 1980s when the show was under the aegis of John Nathan Turner.

In particular there was a quote made by Colin Baker when he left the show in 1986 when he said: “I wish my successor, whoever he or she might be, the best of luck.”Though Baker was indeed jesting at this point, JNT ran with this in the media to provoke press interest.

In the same year the original show Sydney Newman (the man most responsible with the creation of Doctor Who) recommended a female Doctor to the then BBC Chairman Michael Grade. Writing: “At a later stage, Doctor Who should be metamorphosed into a woman.” But being sure to “avoid a flashy, Hollywood Wonder Woman because this kind of heroine with no flaws is a bore.”

“The Doctor should be metamorphosed into a woman, but should avoid being some flashy Hollywood Wonder Woman type. This kind of heroine with no flaws is a such a bore.” Sydney Newman, show creator.

So, over thirty years ago, even Doctor Who’s co-creator wanted a gender change for the lead role. The idea was even played upon in the Comic Relief special ‘The Curse of Fatal Death’ where the Doctor is forced to regenerate multiple times before landing on number 13 and turning into Joanna Lumley.

It wasn’t until recent years however that serious talk was made through snippets of dialogue in certain shows. Namely ‘The Night of the Doctor’, Dark Water/Death in Heaven, Hell Bent and then finally in The Doctor Falls.

The best line explaining it all coming from Peter Capaldi’s Doctor when queried by his companion on the fluidity of gender within the Time Lord community, he replied:

“We’re the most civilised civilisation in the universe. We’re billions of years beyond your petty human obsession with gender and its associated stereotypes.”

The response from the former actors of the show has been varied with David Tennant, one of Whittaker’s co-stars from Broadchurch tweeting: “Doctor Who – another show with a strong female lead!”

Whereas Peter Davison has been on record as disapproving of the move, stating: “I speak now as a fan who grew up watching it. I have trouble with the idea of a female Doctor, only because I reckon if you’re born on Gallifrey a man, you’re probably a male Time Lord. It seems to me if you reverse that, if you have an uncertain, fallible female Doctor with a really strong male companion, you’ve got more of a stereotype than anything else.” 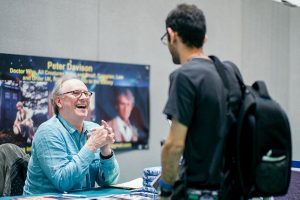 Now as to my opinion on the matter, well I have to admit when I first heard the announcement I was a little perturbed at the idea. But I was quick to drop my concerns when I realised that they were based solely on the fact that Jodie Whittaker is a woman.

After all this was the reason why the show-runners introduced the idea of “renewal” (e.g. “regeneration” as it was then referred to). It was so that once every few years Doctor Who could become a completely different show, with a completely new dynamic.

And in this day and age of fake news and rising concerns about feminism, the gender pay gap and so on, I think it only right that the young audiences of today should have strong female figures to look up to and aspire to.

Juxtaposition – Not The Same