British dance-pop group Steps are set to mark their 20th anniversary with a brand-new single, album and a return to the Welsh capital! 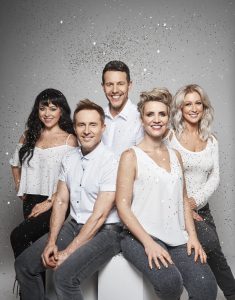 Formed in 1997, the band have scored fourteen consecutive top 5 singles, sold over 20 million records and reached Number One with three albums and three singles. The BRIT award winning group also hold the record for the most consecutive sold-out nights at Wembley Arena.

Their riotous new single Scared Of The Dark premieres later this week, with the release date set to be Friday March 10th. Their single is set to be released ahead of their new album Tears On The Dancefloor which will be out on April 21st.

Speaking of the forthcoming album, Steps added: “This is the album we think our fans have been waiting for. It was very important for us to have a hint of the past but to try to blend it into modern day music. We think Steps are a little bit of what everyone needs right now. We can’t wait to take the new album plus all our favorite hits out on the road”.

Steps are excited to take the new album on the road and today announced the Party On The Dancefloor Tour.

The run kicks off in Dublin on November 13th and hits 13 cities across the UK and Ireland including stops at London’s legendary Wembley Arena and The O2. An exclusive fan ticket pre-sale starts tomorrow, and tickets go on general sale this Friday Mar 10th.

Measles – Are You Protected?