A few Saturdays ago, a group of amazing young people converged on the Riverfront Theatre, Newport, for an amazing day of writing, performing, and discussion on how young people can get more involved with the Welsh arts scene.

A weaker writer would describe the scene outside the theatre that day as pathetic fallacy. The weather was miserable, sure, but I was in happy spirits as I toddled from Newport railway station to the theatre. Inside, I was greeted by the friendly Wales Arts Review team, and a whole host of young people (and teachers too!) from all over Wales, from Rhyl to the Rhondda. 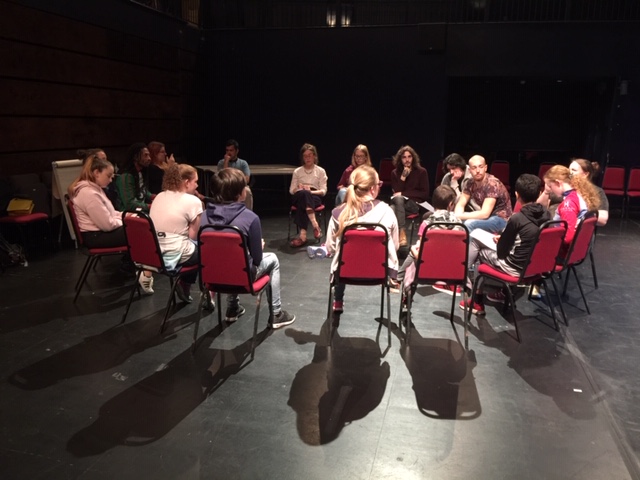 The first workshop I attended was all about comedy sketches, and it was run by the highly affable Llinos Mai. Llinosa told us all about her adventures in the world of comedy writing, then led us through a series of ice-breaking activities. One was all about touching something in the room- anything- and saying the first word that came to mind. For some reason, my mind christened every single thing I touched as “Derek.” Clearly my touch is not that of Midas.

Other icebreakers included “hot seat”, where the participants stood in a semi circle round a chair, where one person sat and sang a song. As anyone who’s ever tried karaoke knows, you soon realise you don’t know the song as well as you thought, and you start to flounder. This is when someone in the audience has to save you by shouting “hot seat” and running in to replace the performer- immediately starting a song of their own. Another highlight was also in a semi circle-vs-1 formation: the performer must announce that they are hunting something. The next person in line then has to creep up and pretend to kill the hunter from behind as whatever that something is. The “self-defending species” ranged from creatures like caterpillars through to inanimate objects like apples- those really test the imagination…

Finally Llinos asked us to come up with a sketch on the spot. For example, one character is a shopkeeper. Other participants enter the space and try to get served in one way or another. This is funny enough by itself as people naturally come up with bizarre conflicts of interest and exaggerated characters. What really makes it snap is when the performers are challenged to give the sketch a new spin by changing its genre. Now look: it’s in the style of High School Musical! Everybody’s cheerfully rhyming, bobbing their shoulders and tapping their feet with every line. Finally, participants are challenged to try being a stand-up comedian. For some it comes easy: just get up and rant about all the weird things teachers do. “Put your hands up if you thought this was going to be funny!” The teachers in the audience put their hands up. “Well, it’s your time you’re wasting!”

After a scrumptious buffet lunch, I attended a second workshop. This time we were downstairs in one of the main theatre spaces- a black square, with floodlights spilling down into it. The theme was storytelling.

Angharad Lee, of Leeway productions, told us that what really drives a story forward is the central character and what they want. The “want” is impeded by a set of “given circumstances.” For example, Postman Pat wants to go home for tea- to do this, he has to get his round done and deliver all the post. His given circumstances are that there’s a tractor blocking the road, the school want him to come in and do a talk on being a postman, and his friend Ted’s been found in a field with a broken ankle. As Pat is a cheery sort of bloke the way he responds to the circumstances is by helping people- finding the tractor’s owner, waiting with Ted til an ambulance arrives, and volunteering at the school.

My team came up with an absolutely crazy story. Our four characters were all meant to be in need of a certain item in order to achieve their goal- a burglar in need of food, The Rock in need of the perfect sausage roll (yes, Dwayne Johnson, no, I don’t know why), Mr Blobby wishing to cure his afflictions (there are many, apparently), and a beautiful blobby space princess who just wants to marry Mr Blobby and explore the far reaches of the universe with him by her side. The sausage roll then had to be transported between all four locations- rolling out of The Rock’s bakery, stolen from Blobby’s grasp by the space princess, who then drops it into the gaping maw of our burglar, who is himself buried (alive or dead) by The Rock for eating his perfect, well-travelled, sausage roll.

It’s not going to win any prizes anytime soon, but it’s a start.

Thank you to the Wales Arts Review for hosting this fantastic day. Although at the Sprout we already host a wide range of artsy content in both English and Welsh, the WAR are notable for their industry connections and wide net over the whole country. If you’re looking for another excellent publication to pop into your bookmarks alongside The Sprout, we can’t recommend them enough.

3 Ways to Get into Writing

Cardiff Council Wants Your Views On Its Loos