When most people look back on the work of Agatha Christie what they mostly tend to remember, or envision in their remembrance, is her Miss Marple character of a small country village gossip, tea and a Kipling cake and a Cluedo/Midsomer Murders type amalgamation of ITV3 daytime fodder.

But one has only to sit down for a performance of The Mousetrap to realise that this is a common misconception and that throughout much of her standalone work, as well as her Hercule Poirot books, there is a dark strain of almost neo-noir type crime.

You’ll find no lead pipes in the library in this dark piece of Christie crime noir.

Especially so in her most famous work And Then There Were None where ten guilty people are brought to a secluded island off the Devon coast and systematically hunted by a psychopathic and sadistic killer; or Ordeal by Innocence where a family must relive the tragic events of a murder after a convicted man, now dead, is proved innocent by the revelations of a hitherto unknown witness. 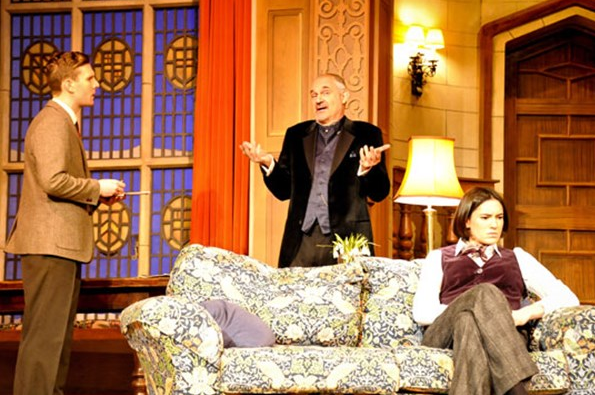 There is much of that in The Mousetrap. A country guest house in the dead of a winter snowdrift, a murder in London announced over a radio, a number of mysterious and eccentric guests, many of whom are dressed in a fashion similar to the description of how the murderer was dressed and the hint of a nursery rhyme, Three Blind Mice, forming part of the killer’s deadly intent.

In classic Christie style a nursery rhyme holds the key to the murderer’s deadly intent.

Then a police inspector calls and shortly afterwards one of the guests is murdered. Was it the retired Army Captain, the mysterious foreigner, the eccentric and mentally unhinged young man, or could it have been one of the hosts? The source of the mystery is one that remains hidden until almost the very end of the play.

And what a fabulous twist it is, in the classic Christie style, one that unless you were already an avid reader of her work you wouldn’t be able to guess, but perhaps not even then either, dismissing it as fanciful in the same moment that is until the final edge-of-your-seat moment when the murderer reveals themselves.

It is a twist that you will only guess if you’re an avid Christie fan, but perhaps not even then.

Once the play is over the cast, smiling and content with having pulled off such a marvellous piece of classic live theatre, come forward and ask that the audience keep the twist ending of The Mousetrap “locked within our hearts”. It is a promise that I shall not break, not even for you lovely people at TheSprout.

Mandela Trilogy: A Night At The Opera @ WMC