As you can imagine, Sunday was a much slower start to our day, but what I came to realise was that Green Man builds itself around this. With a very necessary cup of coffee in our hands and sat in fairly sunny daylight listening to smooth jazz, this was the perfect start to our Sunday festival experience. Like Friday afternoon, our Sunday morning was more a drift from one venue to another, taking in bits and pieces of different acts but not assimilating any one specifically.

However, we had a plan ready for our early afternoon, as the previous day we had come across an area of the festival called Nature Nurture. This was a series of tents promoting holistic and meditative treatments, and of those we couldn’t be at festival like this without experiencing an Indian massage. To no surprise, this was incredibly booked up, so sensibly we had reserved our Sunday afternoon for a half an hour session, one of our best pre-emptive decisions.

“A relaxing, quiet massage with the sound of a gong in the background was exactly what we needed”

A relaxing, quiet massage with the sound of a gong in the background was exactly what we needed to restore our spirits and even when we could hear the sounds of rain returning, it did not bother us. My only regret is that the massage only took place for half an hour rather than choosing the option for an hour as before I knew it the session was over.

Feeling quite meditative but lacking in the life and energy to get me back in the rhythmic mood, there was only one way to restore me to full dance mode and it couldn’t have been timed better than the Mountain stage with the Songhoy Blues.

In the last year I discovered a love of Afrobeat, and am pretty confident in saying that when it comes to dancing, absolutely nothing will get me on my feet faster than a live Afrobeat performance, and this rule remains consistent, as I was ready to make moves to the lively rhythmic stylings of their energetic and lively stage presence.

My only wish was the rest of the audience had the same attitudes as we did. Putting Songhoy Blues on the main stage may be the one time I felt the venue choice may have been misjudged. Comparing this to my last experience of Afrobeat, where Femi Kuti performed in the St David’s Hall, I couldn’t help but see how different the atmosphere on these occasions were. St David’s Hall was also a situation where the venue had been misjudged, considering it was a seat hall, but the audience very much made do with the limited space they had, crowding up small area at the front to dance as much as they could.

In a very antithetical way, Songhoy Blues performing at the mountain stage meant that there was a huge amount of wide open space, but with no shelter from the incessant drizzle, and possibly as a consequence the audience seemed to be more passive where it came to the show. At the time I found this quite frustrating, as the lead singer wanted to channel life and movement into a mostly unresponsive reaction. I felt that putting Songhoy in somewhere more like Chai Wallahs or Far Out would have suited the vibe the band wanted. But still I found this quite restorative.

Sadly, we had to leave Songhoy Blues before the set had ended as there was one act we did not want to miss a single moment of; and that act was Gypsies of Bohemia.

This was one of two acts that Vincent insisted were going to be the highlights of the festival and were the catalyst to instantly sell the idea of the festival. And he was absolutely correct. A jazz infused band, they take contemporary pop songs and reinvent them on a base of gypsy guitars and fun, this was an absolute pleasure and joy to hear. Their choice of playlist were songs that appealed to my personal liking of R’n’B and pop anthems of the early noughties. Nothing will put a smile on my face quicker than a cover of Nelly’s Hot In Herre and that was the tone that Gypsies of Bohemia wanted to create. I must admit I wasn’t as engaged where it came to their original work, as the novelty of the covers tickled my aforementioned love of hybridisation, but one of the biggest highlights none the less.

But as we got into the evening, tiredness began to start laying in. One of my pet peeves of my twenties is when people around my age dare to use the phrase “I’m getting too old”. I consider this term of personal offence, as media has always taught me that being in our twenties is the life peak when it comes to adventures and activities, where the line between youthful exuberance and the maturity to know how to use it meet.

But, with this indignation in my heart, I had to relent to the fact that after three days of dancing, my back started to hurt like a man twice my age. And yes I can feel the evil eyes of the past and future versions of myself weighing down on me. And with that in mind I persisted to get through. And after a short break, we decided to seek out other main highlight that would make Green Man – DJ Yoda.

However, while on the quest to find the correct venue to end our festival experience, we almost missed a vital ceremonial moment – the burning of the Green Man. This was quite a surprise to me, having discovered the monument the day before and believe it was permanent fixture at the Brecon Beacons, I was a little startled when I saw it in flames. But quickly recovering from the shock, we watched as streams of smoke rose into the air whilst streams of fireworks streamed through, a remarkable spectacle. 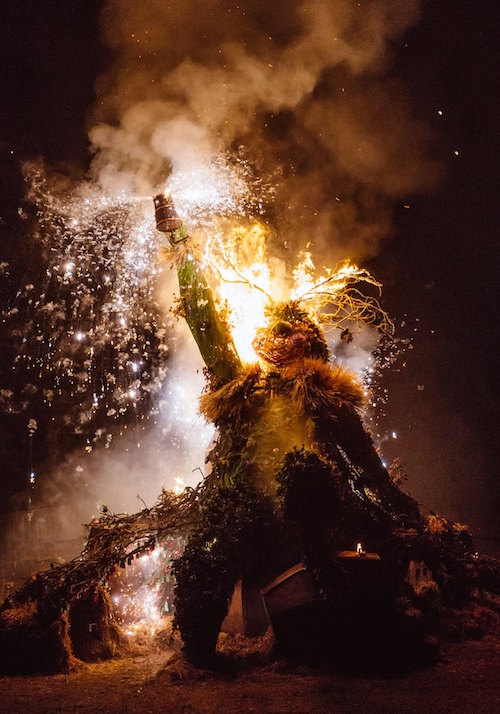 The final part of our night was a little more of a challenge than we initially expected. Not knowing where DJ Yoda was performing, we had fears that we had missed one of acts we had wanted to see the most. But following the slow moving clusters of people, we came across a venue, the Far Out, where a large amount of people where waiting.

With anticipation and uncertainty in our hearts, we waited to see what would maybe be the biggest act we had come to the festival for. Next thing we knew the lights went, strobes blared across the walls and ceiling and indeed DJ Yoda began his set. Never have I known a DJ play such a breadth of tracks so seamlessly from pop to rock to disco to RnB, he held the attention of the crowd from the beginning to the end.

With the pains in my back already a distant memory, I did not stop dancing from his first song right to the end. He was without a shadow of a doubt worth the wait. Considering how I felt ten minutes before he started and the energy I had following it (we went straight back down to dance to the Diplomats of Sounds immediately after) I never known a performer generate such a restorative effect. And with that my experience of the Green Man festival came to end.

Vincent (remember him?) says that when you go to a festival, that sense of isolated community begins to settle into you, and the outside world starts to become a distant world. Even with wet wipes instead of showers, portaloos instead of toilets, and tents instead of beds, I started to feel that synchronisation that one could easily settle into the lifestyle of the festival. I have found this whole experience so informative and, without a doubt, festivals are now something I want experience at least once a year. Green Man has been the perfect flagship of the best a festival can be; with no exceptions, I could happily return year after year and, as I don’t even feel I scratched the surface of what the festival offers, I think each time would give layers to this prestigious event.