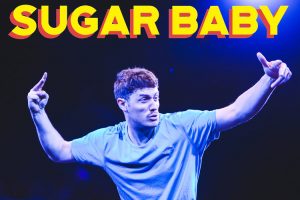 Dirty Protest seem to love the random facts that exist in Wales. Their Lightspeed From Pembroke Dock, was a love letter to Star Wars and how the Millennium Falcon was made there for The Empire Stickers Back. Here we get a famous Cardiff character who is in our heart eternally.

Acutely Directed by Catherine Paskell, Sugar Baby is a bizarre one hander starting Alex Griffin-Griffiths (a RWCMD graduate) as Marc, a cheeky, buzzing drug dealer from Fairwater. He confesses his love for this part of the city and there are many nods to local culture and history. Billy the seal is here (at least in statue form) in a drug induced haze, guiding Marc through his troubles with long time fiend Oggie. Marc’s dad’s owe six grand and Marc wants to pay it off and a love interest might jus be his ticket out of Fairwater and Wales. No doubt based on a true story? *wink wink*

Written by Alan Harris, here lies an often rip roaring script which goes down a storm in the ‘diff, as expected as that is. The show is very much a vehicle to show off Alex’s performing talents. His energy is unprecedented, as beads of sweat linger on his face and neck. How swift he moves, gyrates and frolics around the space, as we watch on often in disbelief. His comic timing was also brilliant, as he brought out all the little inflections of Harris’s words, though there is no doubt some improv and ad libbing each night. Even as he circles the space around me (I was brave enough to sit in the front row), he would rest on my foot in several instances of balancing, as he was up to more tricks and games.

There are some many relatable aspects to the show: how you either loved or hated high school, trying to make sense of love and just how much the classes are defined in Cardiff (a trip to Cyncoed spoke volumes). We could feel whiplash at times from the manner of the explicit nature of the story and just how fast we had to be to keep up with Marc’s ramblings. Though rough around the edges (respectfully), Marc never stops being a lovable rouge, who often has some great come backs and savage wit that could crack skulls due to their force. It also felt in the vein of Iphigenia in Splott by Gary Owen, where one working class character based in a distinct area of our city, goes about their business leading to tragic consequences. It’s so easy to compare the two, though the moods of both are drastically different.

Free and Cheap Things to Do in Cardiff: 2-8 May

A guide to goal setting for young people