Don’t be fooled by the wide eyes and cheeky grins of Avenue Q’s puppets. From the outset, its visual imitation of a scene from an innocent, colourful children’s programme – à la The Muppets –may propose Avenue Q to be an unassuming, family-friendly show. God no, the multiple Tony award-winning musical is, perhaps, Sesame Street on steroids.

Avenue Q centres around a rather motley crew of neighbours that explore the trials and tribulations of suburban racism, homelessness and unemployment with a motherlode of political (in)correctness to boot. Its protagonist, the lowly Princeton, is a woefully naive B.A English  graduate that is desperate to pull together the strings of his life. He is jobless, loveless and homeless, and his attempts to change his fortunes seem futile until he reaches the show’s fictional eponymous street, Avenue Q. 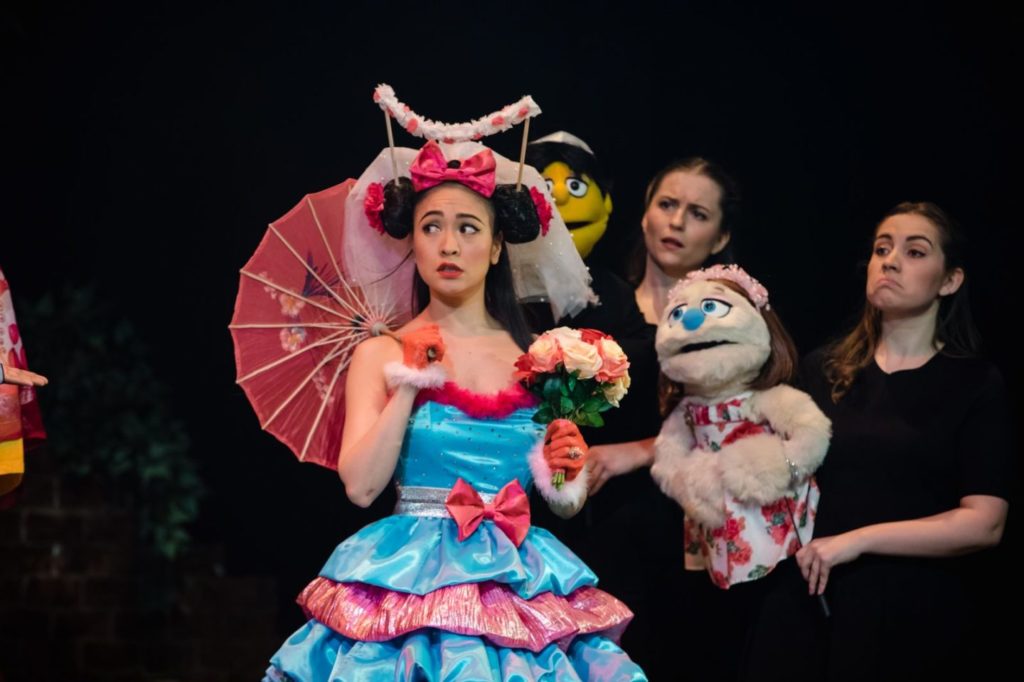 The residents of Avenue Q are a mixture of puppets and humans, but they coexist with a mutual understanding of each other’s struggles. The big-hearted Kate Monster – played by the ever-wonderful Cecily Redman – is a trainee teacher that shocks and delights the audience in equal measure, her liberal use of profanity balanced out by her gentle nature as she giggles throughout the show’s strongest number, Everyone’s A Little Bit Racist. On the other end of the scale is Trekkie Monster, a clear reinvention of Sesame Street’s beloved Cookie Monster, all gruff tone and voracious appetite in tact, but Trekkie’s appetite is not for sweet snacks, shall we say.

Shorn of archetypal musical theatre tropes such as meticulously detailed stage sets and choreography, Avenue Q relies on the mastery of its troupe of puppeteers, who frequently interchange between characters with ease. The obvious omission of such lavish details gives more space for the human-to-puppet spectacle to work effectively. Lawrence Smith oscillates between leads Princeton and Rod, giving the strongest vocal performance of the night while doing so, and Tom Steedon goes a step further, offering up his range for the roles of Nicky, Trekkie Monster and one of the Bad Idea bears.

Filthy and sweary as it may be, Avenue Q is a side-splitting, eye-watering romp that works best when it parodies societal issues at large. Go for the technicoloured hilarity and impeccable comic timing, but you might just want to leave the kids at home!

Avenue Q runs until June 22nd at the New Theatre, Cardiff, then touring.

Youth Centres in Cardiff are open – check the details!

Employment, Training & VolunteeringThings To Do

Want to book a workshop at RawFfest? Find out how here: