REVIEW: Around The World In 80 Days @ New Theatre

Jules Verne needs little introduction. Weather it’s his fantastical tales of travel around the world or to the centre of the earth, he never failed to impress with his bravado in the written form.

The New Vic, have created a new version of Around the World in 80 Days which although has its heart in the right place, has lagsand is in need of compressing. It has a feel of The 39 Steps, only hungover. What should have quick fire momentum are somehow slow and need to pick up their heels. Perhaps the show is trying to hard to be like 39 Steps, evident in the comedic elements and being billed as “125 characters and eight actors”, similar to that show’s marketing. 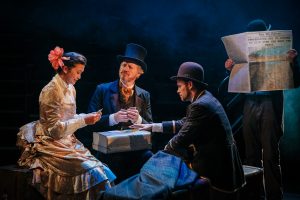 Aimed at children as well, this family friendly show would have been improved with more matinee performances for young ones. The efforts do impress, yet it just lacks at times. Seeing photos of the staging at the New Vic in Newcastle, the show appears more interactive and intimate encounter. As tours often prove, shows become watered down due to the compromises of each different venue.

Some jokes fell flat, others proved near hilarious as so much was thrown at us. It did feature several moments that only kiddies would find amusing, as some child friendly shows seem to suffer form.

The acting for the show was just right. Andrew Pollard is the gentlemanly Phileas Fogg, very Charles Dance like and perfect in the role. Michael Hugo steal the show as Passepartout. Both adorable and infuriating, his physical comedy and effortless clowning should be seen as stand alone. The French character may push the show onto unrelenting parody, but we welcome it as something even more absurd is around the corner.

Kristen Foster was the fascinating character of Mrs Aouda. With her her husband dead, she must embrace the flames of his funeral pure. Of course, Fogg would hear nothing of it and she espaces India and her fate, tagging along for the epic journey. Her performance is heartfelt, since you care for her and her plight.

Some comedy is overused, other types not used enough. Stage combat is half impressive since actors are striking people on the other half of the stage. Slow mo moments are also stale and a circus routine in vast need of tighter execution. Some moments impressive whilst other left wanting.

With little notice of a 7pm start and lack of information on a cast member change, I do wish things have gone more swimmingly.

Although this critic may have found problems with the show. I’d would still be moved to recommend it to families and those who love physical comedy.