Remembering the wonders of Stephen Hawking

Heralded as one of the greatest thinkers of modern science, world-renowned cosmologist and theoretical physicist Stephen Hawking has died at age 76, but the truths he unlocked will survive the rest of our existence.

Hawking dedicated his life to understanding the universe, he stated, “My goal is simple. It is a complete understanding of the universe, why it is as it is and why it exists at all.” In the 1970s, he and fellow physicist, Roger Penrose, unveiled extraordinary realities about black holes, altering the direction of modern science.

At the core of his discoveries was the notion of singularity.

Applying quantum theory, he showed that black holes emit heat and eventually, after a very long period of time, will explode with the energy of a million nuclear bombs, destroying everything.

Unsurprisingly, Hawking found his undergraduate degree ridiculously easy and therefore, spent his first year stirring in boredom. Now, if you want evidence to show that academic grades are not accurate representations of your intellectual abilities, understand that Hawking, whilst at Oxford University, bargained with his examiners for a higher grade. Initially earning himself a 2:1, Hawking threatened to remain at Oxford to study his masters if they did not give him a first. Being the trouble-making mischievous character who found laughter in running over students’ feet with his car, they secured him a first class result and with his sense of humour intact, off to Cambridge University he went. As he stated later on in his days, “Life would be tragic if it weren’t funny.”

“Mankind’s greatest achievements have come about by talking, and its greatest failures by not talking.”

Whilst studying at Cambridge, Hawking was diagnosed with a rare form of motor neurone disease known as ALS and was given only two years to live. His speech became unintelligible, he was wheelchair-bound and paralysed, communicating only through a muscle in his cheek that was detected by an infrared switch on his glasses. From this, he could control the cursor on his computer and send messages to his speech synthesizer.

His new voice became a spectacle in the public sphere, but it signified a wider message about the importance of the free distribution of ideas through communication and dialogue. The power of language is colossal. He claimed, “Speech has allowed the communication of ideas, enabling human beings to work together to build the impossible. Mankind’s greatest achievements have come about by talking, and its greatest failures by not talking.” 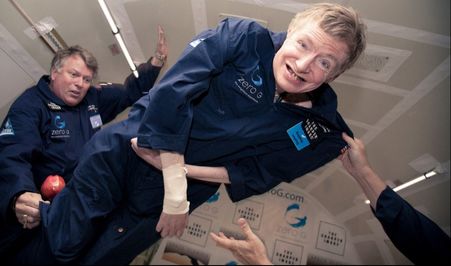 Hawking did not hold back on his political, academic and religious views. Declaring that there is, in fact, no god; death is nothing to fear; and that for humanity to survive we must expand out into space. His views on artificial intelligence are too, hard-hitting but like most of his claims, they hold up a mirror to humanity, to power dynamics at play and to our foreboding future. Hawking once said, “computers can, in theory, emulate human intelligence and exceed it.” Whether or not this will be beneficial to humanity is unknown, but what is certain is that that artificial intelligence holds immense transformative possibilities.

Unbeknownst to Hawking, was how these transformative possibilities will be executed and who they will be of benefit to. When questioned over whether or not robots and machines will take over our jobs and our livelihood, he stated, showing his socialist-leaning sensibilities, “the outcome will depend on how things are distributed. Everyone can enjoy a life of luxurious leisure if the machine-produced wealth is shared, or more people can end up miserably poor if the machine-owners successfully lobby against wealth redistribution. So far, the trend seems to be toward the second option, with technology driving ever-increasing inequality.”

These humanitarian issues resonated with Hawking greatly. A staunch Labour Party supporter since his university days, Hawking championed the NHS, claiming that he had received life-saving treatment from it after his diagnosis. He was also very vocal about his views on climate change, claiming Earth is onset to become much like Venus with temperatures reaching 250 degrees Celsius and acid rain if not taken seriously.

In 2014, Eddie Redmayne starred as Stephen Hawking in The Theory of Everything, which secured him an Oscar for Best Actor. In response to his death, Redmayne stated, “We have lost a truly beautiful mind, an astonishing scientist and the funniest man I have ever had the pleasure to meet.”

Hawking’s impact on humanity has been monumental and his ideas will continue to energize and permeate the human mind for the rest of time.

21 Things You Should Know Before Starting Uni!

Get yourself out of the graduate hangover