Now in its marvellous 16th year, Greenman is set to welcome 20,000 guests to yet another magical four days of music in the Black Mountains this weekend.

We cannot wait to wade into the magic, with our wellies up our knees and rain macs down to meet them. And whilst the tantalising line up boasts bands such as Grizzly Bear, Fleet Foxes, The War On Drugs and Mount Kimbie, we’ve been scanning the line up for just some of the many Welsh acts that we’re excited to catch at this year’s event.

Led by the unwavering talent of Cardiff’s Davey Newington, a classically trained musician whose parents met in the National Orchestra of Wales, Boy Azooga cite Sly & The Family Stone, Caribou, Black Sabbath, Outkast, and The Beastie Boys among their key influencers. And one listen to their infectiously energetic, instrumental party-rock suggests they are probably right.

Another Cardiff band making a lot of noise in all the right places, Buzzard make indelibly bright guitar-pop. Their sound is rough and ready, somewhat frayed at the edges but with an endearing charm that stands them in good stead for the rest of 2018; their biggest year thus-far.

Newcomers Adwaith have been described by one reviewer as “Carmarthen’s finest”- which definitely doesn’t begin to do justice to one of the best new Welsh bands we’ve heard in many years. Signed to Libertino Records, this bilingual up-and-coming trio blend psych-pop with a decisive post-punk feminist edge. Banging! 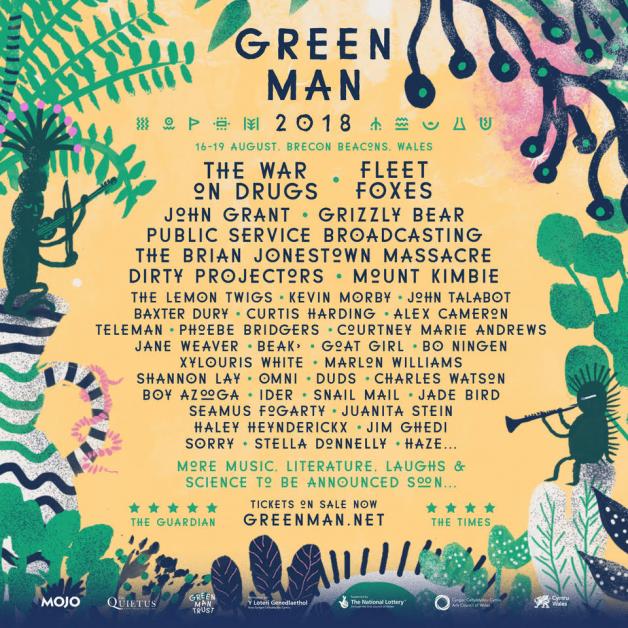 A regular visitor to Green Man, the brilliant, bilingual songwriter Steve Black, aka Sweet Baboo, has a craft for making even the more skewed corners of his mind sound like the sweetest and most soulful pop songs around. 2017’s Wild Imagination was further proof of his charming talent; a worthy nominee for the Welsh Music Prize.

A queen away from home, Cate Le Bon might have been based in LA for a while now but she remains one of Wales’ greatest exports. A prodigious guitar player, with the ability to craft a breathless marriage of guitar-pop and post-punk, Le Bon shifts the pace and tone of her work at will – but always produces something bloody wonderful.

Hailing from Penarth, drum n bass producer High Contrast has been releasing stellar work ever since his debut album way back in 2002. Releasing a string of great records in the time since, as well as a whole host of revered remixes and collaborations, Lincoln Barrett returned to the limelight in 2017 with a brand new album, not to mention a thumping track on the new T2 Trainspotting soundtrack.

Greenman runs from 16-19 August 2018. Text adapted from the Greenman Festival website and programme. Image from www.greenman.net