How does living in Cardiff affect you? Does it make you a different person than living in Brecon, Oxford, or even the Valleys? Psychogeographer Peter Finch says there’s a simple resolution: the destruction of Caerphilly Mountain. 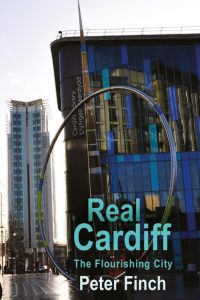 Peter Finch is the author of the Real Cardiff series and many other titles which draw on his knowledge of the city, including the Roots of Rock, which explores Rock and Roll’s origins in Cardiff. He has become the editor of the Real Cities series, which grew from Cardiff to explore Newport, Swansea, Wrexham, and now everywhere from Liverpool to Glasgow.

His latest book is Real Cardiff 4. “This goes back to tie up a number of things I hadn’t said about Cardiff before- and the focus is on what has changed since I wrote the first book about 18 years ago.”

Finch begins our conversation by stating his main topic of interest. “I’m interested in how living in a place affects you. How is living in Cardiff different from Brecon, or Oxford.”

This statement fascinated me, as I had recently read the book High Rise by J.G.Ballard, a book all about how where you live affects your mental state. Was Ballard an influence?

Finch says that while High Rise and Crash were inspirations, the main inspiration was Ballard’s style, and his short stories- “in Cocaine Nights, he wrote about communities in south France that were self-contained. I got so interested in that, I went to hunt out the very community that had inspired him between Cannes and Nice. I was interested in his idea of control- you see minor reflections of that in the gated communities that have developed in the Bay.”

On your blog, I say, you describe Ely as self-contained. What do you mean by that? “Ely was the first big estate- between the wars- a grand avenue up the middle built originally for a tram system but things went wrong for them. You get the sense that the community is self-contained. How well does that community mix with the later community of Caerau? Why would you need to go anywhere else? People do, but you don’t have to. That’s a common thing in council estates across the UK- you’re out on the fringes of the city, you’re not part of the city, you’re part of the estate- and how often do people in council estates talk to each other? Less than those in middle-class housing do, I think.”

And now, of course, they’re going to put a tram in. “Well, something like that.” 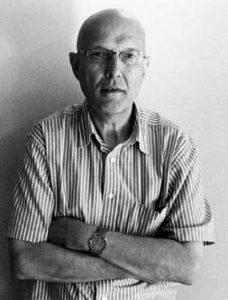 I’m interested in how far back Peter’s roots go. I ask did he grow up in Cardiff? Did he move far? “Roath, we didn’t move far. My parents had the idea you could survive by buying a house, selling it, then buying another. We moved to Canton once for about six months but then we went back to Greater Roath.”

During the talk following our interview, Peter relates an interesting fact about Roath Park. It was a ditch filled in with refuse by the local unemployed, put to work by the council. This might sound shocking- our beloved park is made of rubbish? But in fact, refuse back then was quite different to what refuse is like now. In those pre-packaging, and pre-central heating days, domestic waste was mostly ash from fires- people didn’t throw things away so easily. The councillors also planned to freeze the lake and make it into a skating rink, but much like the tram this never came to fruition- today’s paddling area is the only remnant of this plan.

So: a lifelong Cardiffian. What has changed for young people in Cardiff? “The experience of being in the city has changed out of all proportion. The city changes about every 20 years. Go back to where we are now, the barrage hasn’t been established, the Millenium Centre hasn’t been built, the Senedd isn’t there, the Bay is a redevelopment thing. 20 years before that the Bay is an industrial wasteland, 20 years before that the bay is working, still a coal exporting port.” 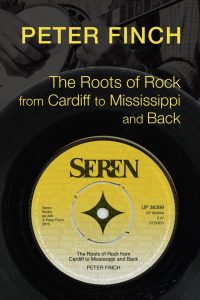 The Roots of Rock: From Cardiff to Mississippi and Back– Finch/Seren

“Brought up in the 60s and the 70s in Cardiff, you had no facilities. Nothing compared to what you have now. There were clubs in the docks which we used to go to. We would drink and boogie ‘til 3 o’clock in the morning, but there were only four or five of these- they were all in the docks, nothing in the centre. I recall about two restaurants you could go to in Cardiff… then gradually through the 60s, Indian restaurants began to develop, so you could spend a bit more time out. Effectively there was nothing whereas today there is everything.”

I ask about his book The Roots of Rock and how it relates to the modern music scene. “When I got interested in music there wasn’t much… there was the Victoria Ballroom and the Kennard Rooms, City Road Junction, big places but no alcohol license and they didn’t play late either. Whereas now, people complain about the music city!”

In his talk, Peter mentions preservation. There have been great changes afoot, but he wishes a bit more attention to history could have been made. “We’ve had to get rid of a lot of things. Something’s in the wrong place? Remove it. That’s capitalism’s best option. Roath Mill, for example, stood for 1000 years, and was totally demolished. Nobody thought it worth hanging onto. The great shipbuilders’ houses of Pen-y-Lan hill, where they used to look out over the docks at the ships they owned, are all gone.”

He says he once asked Russell Goodway, veteran Cardiff councillor, if he’d made any mistakes in driving the transformation of modern Cardiff. Goodway said his mistake was filling in the canal that once cut through St Mary’s Street. A waterway running through the city could have been a great tourist attraction. And then there’s the railways- National Transport Wales and the South Wales Metro will have to put a lot of them back. 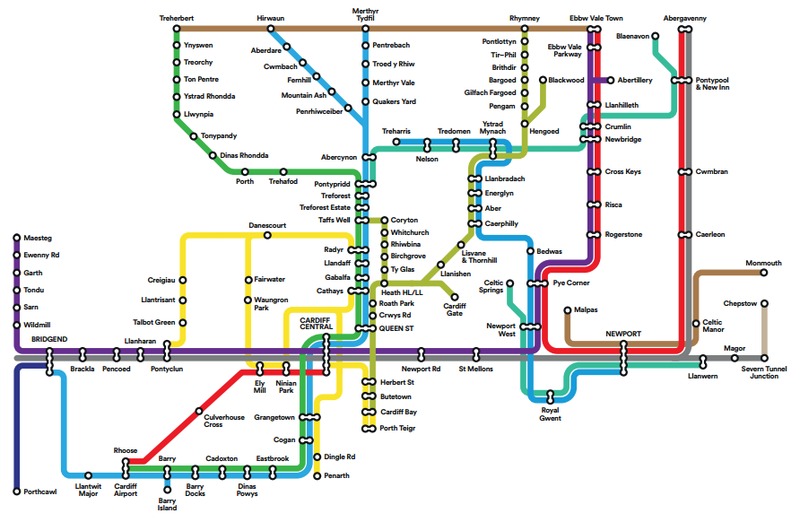 In the absence of railways and canals, Peter gives his recommendation for exploring the city. “You can’t see it best by car, and walking takes too long. See it on a pushbike.” I fully agree.

So life is better now for Cardiffians? “Cardiff was a dull, badly lit, smoky, dirty place. Now, it’s clean, pedestrianised, well-lit. The whole of the centre is a front room, a play area- people bowl from one end to the other.” 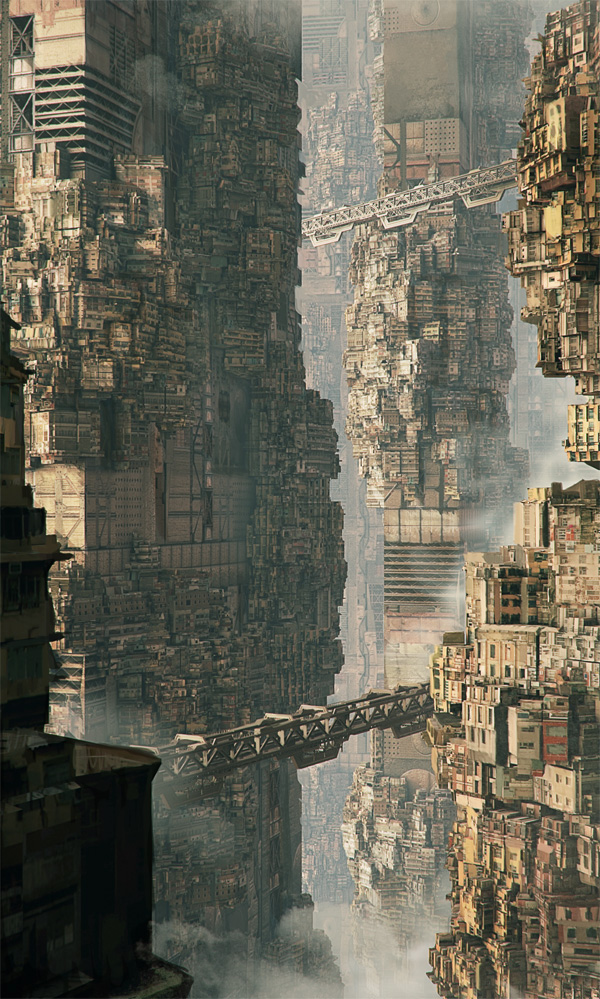 The Concentration City by Maciej Drabik on Behance

People from all over the world love the “playroom” city. The population, by some estimates, will hit 412,000 by 2026. What the city will need then is growth- outwards and upwards. Peter is not keen on the student accommodation high-rises shooting up around the city (again, he evokes Ballard’s The Concentration City, where the whole world is made of high rise blocks encircling the planet)- cheap accommodation, built without the future in mind, ready to be re-zoned as cramped professional housing if the students don’t move in, without a second thought. On this I slightly disagree- I would be in favour of more provision for the young single professional, fresh out of university, obviously. But the general sentiment of lazy building without a thought for heritage or community I can get behind.

The other suggestion Peter has is to expand outwards, and somehow demolish Caerphilly Mountain. “I once heard that there is a particular bar in Tongwynlais where the accent changes from Cahhhdiff to th’ Va-lleeeeys.” He says if the mountain was gone we would realize we’re the same people all the way up, and the transport would be much faster. Newport and the capital would join in Finch’s poetic vision, and walls will hold back the rising seas as climate change sinks in. A man in the audience is horrified: “what would we call it? Carport? Newdiff?” Finch replies that whatever it’s named, the expansion is inevitable.

Last I ask Peter, a successful author and publisher with about 40 books under his belt, if he has any tips for young people who want to write. He is happy to oblige.

“Read as much as you can- don’t worry about copying or being influenced by authors you’ve read, in fact, if you like it you should actively imitate it. Then your own style will come. It’s a lot of hard work, don’t expect success instantly. You’ve got to work at it, don’t wander round expecting inspiration to come flying in from above on rays of sunlight. That might happen but by and large, what you make as a writer is by getting up, devoting time to it and labouring at it. Then it’s all achievable.”