Snowcat Cinema are an events company that have been screening films inside the refurbished cinema at Penarth Pier Pavilion for the last two years or so.

It’s a beautiful experience, and I would recommend it to anyone. Step off the train at cosy Penarth station, saunter down through the beautiful streets and park of this seaside town, and arrive at the historic pavilion in plenty of time to see whatever Hollywood magic they’re showing. See the listings and more info on their website– otherwise here’s our interview with founder Ben.

When and how did you come up with the idea for Snowcat?
A couple of years ago I took the chance to change direction and decided that I wanted to try to make my passion for film into a new career. I wasn’t totally sure what to do but an opportunity came up to work with the wonderful team at FilmBath (was Bath Film Festival at that point). I managed a handful of screenings during the festival from the technical side of things and that made me realise that I could put on the films that I wanted to see if I could find the right place to do so. I started out in the back rooms of pubs and coffee shops in Cardiff – screening sci-fi and horror to a loyal band of fellow-fanatics. In most cases they were films that were unlikely to be screened elsewhere and I enjoyed the atmosphere and community that built up around the screenings. Unlike at a multiplex, people turned up early and left late, relishing the opportunity to talk about their less mainstream favourites.

Why did you decide to hold it on a pier?
I moved to Penarth in 2016, not long before the cinema at the Pavilion ceased operation. It seemed like an opportunity too good to be missed to try to put on some films in such a great location. The first event was a double-bill of John Carpenter classics – The Fog and The Thing – for Hallowe’en in 2017. These were really popular and a lot of people were really excited to see the cinema back in use so I tried a few more over the next month or so. Then, when Christmas came around I took the plunge and put on a full programme of festive movies. From then on the programme has grown month-on-month with a regular line-up now being screened from Thursday to Sunday every week.
Now that we’re residing on the pier I can’t imagine anywhere better to be – the only cinema on a pier in the UK, a beautiful view from the office, and a growing audience of film-buffs!

What are the struggles with holding events on such a retro building?
The cinema is kitted out with state-of-the-art digital equipment, a big full-scope screen and great sound set-up so it’s as good an experience as you’d get elsewhere. Although some people in the town complain about the lack of parking down at the seafront, it’s not really much of an issue for us as most of the audience walks to events. The retro element of the building makes for its charm – a night out at Penarth Pier Pavilion is magical!

What goes on behind the scenes at Snowcat? Is much prep needed?
Snowcat Cinema is not far off being a one man operation. From licensing films to writing film-notes, social media to front-of-house management, I do it all. I do rely heavily on my wife, assistant Jon, and a band of lovely volunteers who all make this possible. My wife grounds some of my more ‘niche’ programming suggestions and is good at picking the films that make loads of money!
It’s a pretty intensive operation – I spend untold hours researching, getting the screenings ready, and pushing out social media posts to try to sell more and more tickets. I love it all though!

What’s the best film you’ve shown so far?
Hard to say! Fastest selling – Lost Boys. Biggest selling – A Star Is Born. But the ones that I love are those that are rare screenings or that give people a special experience; little-seen feminist classic Born In Flames, silent wonder Pandora’s Box, two great Hitchcock screenings with Q&As… almost everything we show is a favourite of mine or something that feels like it deserves an outing on the big screen so that it can find a new audience.

What makes film as a medium so magical?
Essentially the opportunity to get lost in a different world for a couple of hours. To switch off and go on adventures, be wooed, frightened or thrilled. From a purely visual point-of-view, even films not generally appreciated for their cinematography can be enjoyed very differently on a large screen. I wish we had a 70mm projector to play with so that we could truly deliver the full film experience – but a 4K digital projector is the next best thing.

Why should people see films in a cinema rather than at home?
Home cinema has come on leaps and bounds in recent years – screens are bigger, resolution is higher, audio can be spectacular… but, the experience of watching films with an audience should not be overlooked. I’ve rewatched films that I liked the first time around but absolutely loved when seeing them with other people laughing along or jumping out of their seats. I love talking about films with the audience, I sometimes introduce the film to explain its significance or to give people a bit of context. I want the Snowcat Cinema experience to be something special that gives the audience more than just another film screening.

Does cinema still have an important role to play in young people’s cultural lives?
I hope so. It seems that there is a generation gap opening up though – with many younger people not experiencing the same sense of magic that older generations did when growing up. Going to the cinema was the only way to see the latest films – my parents refused to buy a VCR so film was a rare treasure for me. Some of my best childhood memories are of seeing films at the small cinema in my home town – Ghostbusters, The Return Of The Jedi, Flight Of The Navigator, ET. Now it’s often possible to watch new releases before they even come out in the UK – as long as you don’t mind them having been filmed with a camcorder, with bad sound and in low resolution.
Personally, I think it’s important to explore as well – if you like a film, read about its conception, its production, its influences and, in turn what it has influenced. Very few films exist in creative isolation and I’ve found some of my all-time favourites through a process of checking out the director’s favourite films or seeing where a certain style comes from. Cinema loops and recycles constantly and that means that there’s a virtually inexhaustible supply of ‘new’ films to be found by the curious.

How do you choose what films to screen?
Mainly I programme films that I’d like to see at the cinema. When I first started I just hoped that enough people would come to be able to cover costs and then I’d get to see the film on the big screen! I soon realised that the films I was choosing had struck a chord though – they started to sell out. Often I programme on the basis of important anniversaries – 40 years since the release of Apocalypse Now for example, or on a date relevant to the film like Breakfast Club on the date that the kids are in detention.
As it’s a curated programme I try to avoid screening films that I haven’t seen as that means I can’t vouch for them. With new releases I try to choose the ones that I think will appeal to the audience in Penarth – sometimes they work, sometimes they don’t.

What’s your fave story about a link between Wales and Hollywood?
Last year I attended a really inspiring talk by Lynwen Brennan. She’s from Pembrokeshire and in the 90s, excited by the visual-effects revolution led by Jurassic Park, she set her sights on making a name for herself in Hollywood. Now she’s the Executive Vice President and General Manager of Lucasfilm! She lives by the old adage that if you don’t ask, you don’t get. And she’s right! Her success story is one that I was really moved by. 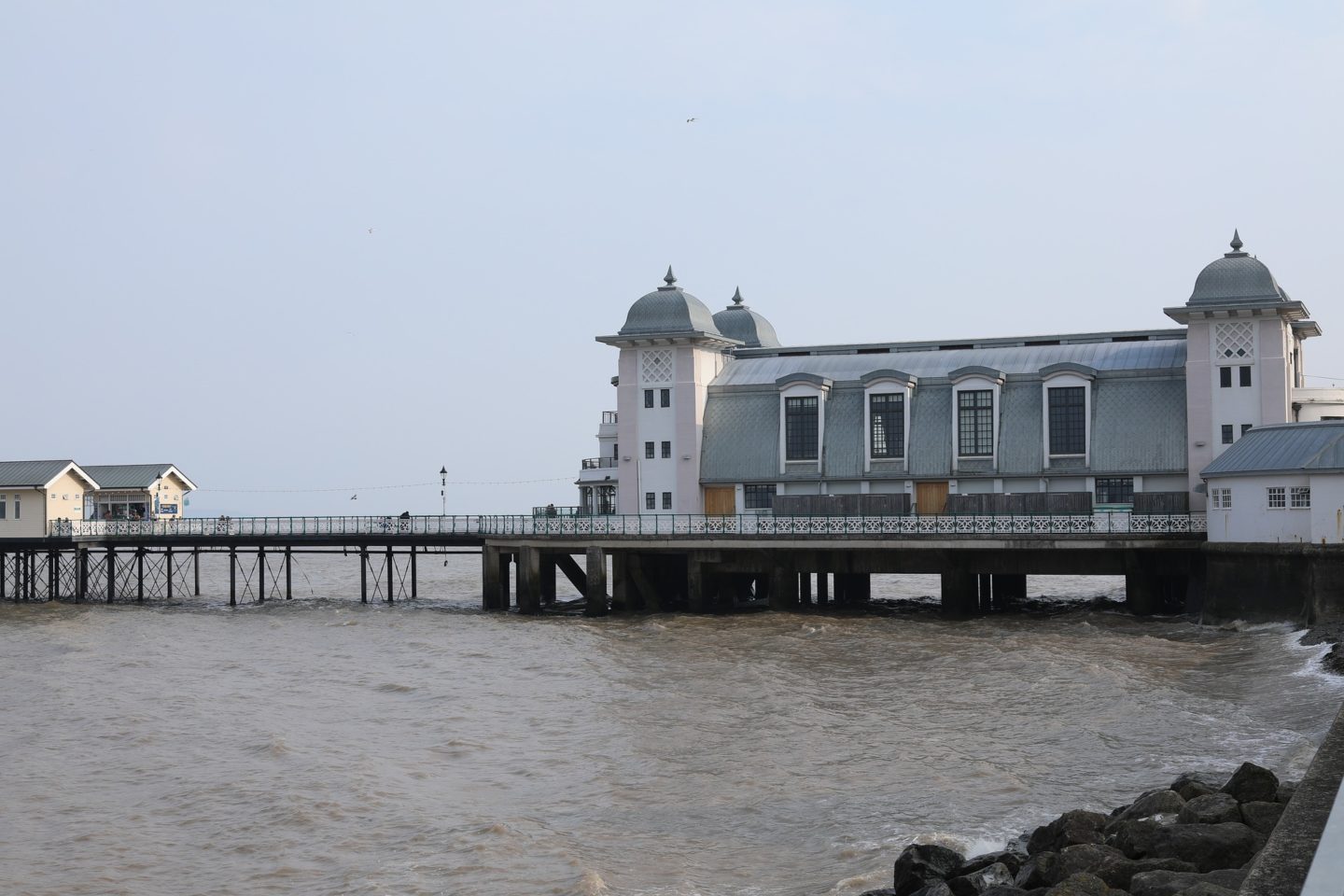 Where do you see the UK film industry going next?
Film production goes from strength-to-strength with a varied and interesting array of films coming out all the time. The exhibition side of things has some challenges to overcome – although audience numbers are reported as being on the increase overall, costs for putting on films remain high with the profits often difficult to achieve. I’d like to see a continuation in the development of new distribution models to encourage exhibitors to be able to take risks with programming.

Where is Snowcat going next? More venues? Or stay small? Valleys venues? Lay on a later train on Sundays? 😉
We’re going to continue to programme at Penarth Pier Pavilion for as long as people keep coming! Pop-ups are still on the agenda too though, we’ll continue to put films on in other places too. Sadly we can’t control the train timetable but our Sunday evening screenings are now starting earlier to give people from outside Penarth to get home. The dream is to open a two-screen cinema of our own, more seats, more films – but that’s quite an undertaking!

Brilliant! I can’t wait for the early afternoon screenings on the pier.
(For more train moans, be sure to check out the Strangetown podcast.)

Snowcat Cinema is featured in this week’s Free and Cheap Things To Do In Cardiff list.

Learn more about their screenings on https://www.snowcatcinema.co.uk/

Thank you to Chris Gower Jones for the free picture of Penarth Pier.

Review: The Girl On The Train @ Superscreen, Cineworld Cardiff