From the opening gambits of the 5 politicians; whispered debates, heckling, boos and snaps of derisive laughter could be heard from various sections in the auditorium. The atmosphere was charged, with candidates and attendees spoiling for a rhetorical fight. Perhaps it is indicative of the vicious divides within the country, and in the UK as a whole, that this debate was characterised by an aura of prickliness – as if panellists and audience alike were aware that this was politics, and therefore would neither be pleasant or polite.

The Conservatives were represented by Andrew RT Davies. He started brimming with confidence, never looking at his notes, gesticulating with force. By the first break it became clear that he didn’t need his notes as he wasn’t actually saying anything, just parroting Tory slogans until the clock ran out. He managed to shoe horn no less than seven “strong and stable”-s into the first 30 minutes, but quickly dropped this tactic when audience started to boo. For those interested, my tally only made it up to 10.

Plaid Cymru’s Leanne Wood was a surprising flop. Usually a roaring tiger in debates, last night she seemed almost unsure of herself, and oddly repetitive. While her interjections were always nail-on-head accurate, they also strayed into rudeness with their sheer frequency. Her extended speeches saw her tied to her notes, eyes often down, one hand shakily tracking its way down sheet after sheet of pre-written responses. Leanne clearly thrives on combat though, and started to find her mojo when it came to defending her record in government, and her questionable attempt at coalition with the Tories and UKIP last year. When the fight is in her, she is formidable. 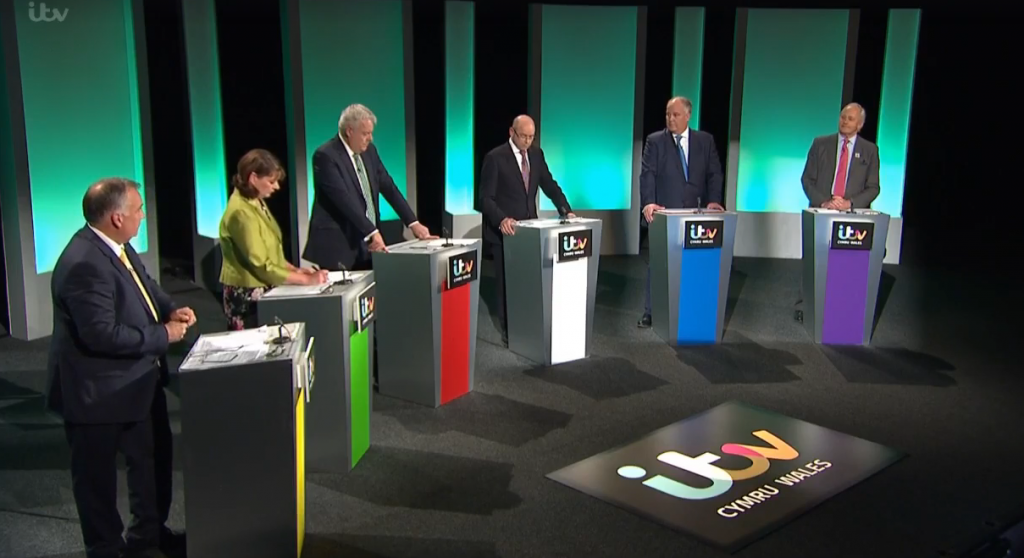 Mark Williams represented the Liberal Democrats, and was clearly making a bid to salvage the party’s reputation from the tuition fees debacle / recent street heckling /semi-homophobic Tim Farron comments. He clearly had a feel for the big issues in the room, garnering applause with comments about social care, the NHS and funding education. He came a little unstuck explaining the nuances in accepting the result of the referendum while actively campaigning for another one, but otherwise had passion, reason and sincerity. For the “Can we trust politicians question” he unflinchingly fell on the sword of tuition fees, bravely admitting that yes, we messed up, and we’re sorry. Say what you like about false-apologies and playing for the audience, but I can’t think of another politician who has owned up to being wrong and just said sorry.

For me, admittedly a proud socialist and Labour voter, Carwyn Jones stole the night. At last year’s debate, and in many previous interviews, Carwyn has disappointed by coming across too muted, too boringly statesman-like, almost blasé in his confidence at Labour holding the seat of power in Wales. Tonight, I finally saw real fire from a passionate, desk-bashing socialist who would fight for his party and his country. It could be seen as an obvious play to Welsh history, but talking about realising his vocation amidst the miners strikes in the 80s, conjured up the ghost of an angry young man who entered politics to ensure no community would get left behind again. Maybe a bit of adversity brings out the best in him.

Neil Hamilton deserves credit for inventing a new way of saying “I don’t have a clue” with his “cut your coat to fit the cloth” comment, which he used to shut down almost every difficult question. The epitome of UKIP at their worst; his comment about Eastern European’s being the wrong kind of migrants, uttered a split second after assuring us UKIP’s migration policy would not be discriminative, prompted an audible gasp from the audience. This seemed to prove the breaking point of the debate; the second the commercial break began questioner Steve was prompted to ask (with almost unbearable politeness) whether his wife or his friends were the kind of scourge on society that Hamilton was talking about.

While the audience at home were treated to adverts, the studio audience took the pause as an opportunity to vent the steam that had built through the immigration segment. Steve and others shared horror stories of family members stuck in limbo, passport-less, unsure of their citizenship and totally unable to plan for the future. An audience member boomed “Neil Hamilton, you disgust me” while a man in a Union Jack suit (guess who he’s voting for) blamed it all on the EU’s economic policies.

No wonder that the final segment on trust became a free for all, with the audience interjecting at any given opportunity. The question on the £350 million battle bus prompted possibly the longest and loudest applause of the night. Andrew RT Davies utterly undermined the content of his answer (drowned with applause as it was) by predicating it with a disgustingly contemptuous eye-roll at the questioner, perfectly displaying the empathy the Conservatives clearly have for those concerned with the future of the NHS. What more fitting end could there be to a discussion about how politicians don’t seem to listen to the common voter?

When the cameras stopped rolling, a number of heavy sighs could be heard throughout the auditorium. Audience and leaders alike were exhausted from a bruising debate that characterised just how nasty this election battle has become. But I can only assume, with weeks of campaigning still left before June 8th, that last night was just one, particularly bloody, fight in the on-going battle for the next election.

Review: My Country, A Work In Progress @ Sherman Cymru

Is it worth getting TOTUM – AKA an NUS Card?

#YourShout: Nominate Someone For An Inspire Award!