The Festival of Voice is now and here in Cardiff. Looking at the schedule for the week ahead, I’d be lying if I didn’t feel that there was too much on. We are spoilt for choice in this overwhelming amount of classical, opera, pop, folk, jazz and other genres of music.

In this unofficial opener to the festival, Music Theatre Wales put on a special event where composers and librettists got the opportunity to create a brand new aria. As standalone pieces, these songs were created through workshops with the heavy theme of immigration. Real testimonies were heard from those who have gone through it all. No doubt many a moving moment was had. 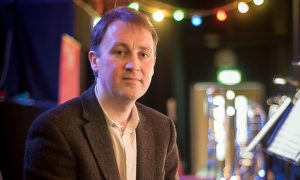 Led by Stuart MacRae, each composer and writer got the chance to speak of their creation and the importance of the subject material and how the aesthetic of musical creation occurred. The Unwanted Wife paints a fierce picture of sibling resentment. A middle child daughter is sold off to the same husband as her older sister and is treated as a concubine.

When she realises, after having several children, that now her youngest sister is going to replace her, this character express her resentment and anger. Daniel Soley has written the score with interesting detailing and Pey Pey Oh’s writing expresses the dislike to the situation and a telling portable of sisterhood in all its form. Lilo Evans (soprano) did a bang up job in delivering this aria to a keen audience.

Farsana by Joe Shrimpling/Eric Ngalle Charles was less interesting, with most of it about crickets in the night time sung by smooth baritone Rodney Clarke. The highlight of the evening was Je suis jetée! from composer Andrew Wallace and writer Wanda O’Conner. Wallace, though stiffening in his awkwardness, comes alive in his wonderful, impressionistic influence score. Wanda’s words are in both French and English, maintaining a great dynamic between both languages.

My Mother’s Rings is rife in its unsettling nature. We hear the word’s of Hani and her escape from Somalia to Italy by boat. The motivation for the departure is to due to her friend’s death from botched genital mutilation. Lilo returns to swell and and emote in this terrifying music by Charlotte Eaton-Jones, vivid imagery by Jeanne Jones of the turbulent journey to Europe.

The arias came to an end with In Limbo, a poetic piece about the uncertainty of being an asylum speaker, yet also the freedom which comes with it. Carlijn Metselaat creates a song, Charles Ives like on the ear, with subtleties and a sense that the music is hovering. A less than enthusiastic Othniel Smith was not so keen on editing his poetry to alter the score, as by the request of MacRae. In doing so, he reconsiders the fact that this adjustment did sound better for the composition.

The evening ended with Bevin Magama, who was greatly involved in the workshops, played us off with his marvellous mbira (thumb piano). His story of The Rat and the Porcupine, a delightful children story masquerading as its own statement about refuge and gratitude.

An evening of inspiration and hope.

Festival of Voice continues in and around Cardiff all this week. Highlights include La Voix Humaine, Opera for the Unknown Women and The Last Mermaid.

A Change of Direction