Confidence and Supply: The Story Behind the Tory/DUP Deal

The recent shock result of a hung parliament in last week’s general election, and the resultant noises that have been made between the Tory party and the Democratic Unionist Party, has left some of us wondering what exactly is going on.

In this article I shall endeavour to explain.

When Theresa May first called this election she did so expecting to receive a landslide majority of a hundred seats and to be waved into Downing Street ahead of a triumphant Tory party. Only she forgot one thing. That in politics even the best laid plans can be overtaken by events.

In calling this election Mrs. May has forgotten that even the best laid plans can be overtaken by events.

And there have been some exceptional events in the last few weeks which have seen terror attacks in Manchester and London and a Labour party under Jeremy Corbyn closing the polling gap to just 2%, which has left the Tories crucially short of a majority by just eight seats.

The immediate result of this has been that Theresa May has been forced to go cap in hand to the Democrat and Unionist Party in Northern Ireland. Such a move is always ill-advised since the British government has always acted as the official mediator in the event of political turmoil in Ulster.

The result of this election is that Theresa May has been forced into her own coalition of chaos as a result of the hung parliament.

Previous minority governments, such as the Labour governments of 1974-79, have always been tempted to call upon the support of politically friendly Northern Irish parties. But the political complexities of the province meant that said governments have avoided such temptations for fear of derailing the peace movement in Northern Ireland.

So why has Theresa May chosen to throw cation to the wind here? It is because she has no other choice politically. None of the Westminster minority parties will ever dream of giving her a deal, no matter what the terms. However the DUP has previously shown its willingness to do a deal with Westminster parties in the event of hung parliaments.

The DUP have shown their willingness to provide the role of kingmakers in a Westminster stalemate before.

This was most prominently displayed during the 2015 general election when the DUP had made a 45-point list of political demands that it would make with either political party in the result of a hung parliament. This list was quickly forgotten when the Tories came through with a majority but it’s a list that is now being keenly analysed by political commentators.

The DUP and its members have been described in recent years as being on the hard political right, stated as being in favour of anti-abortion and anti-gay laws. But while it does back the UK’s withdrawal from the European Union, it has stated that it does not support a hard Brexit, as this will mean a return to a hard border with the Irish Republic which no party in Northern Ireland wants. 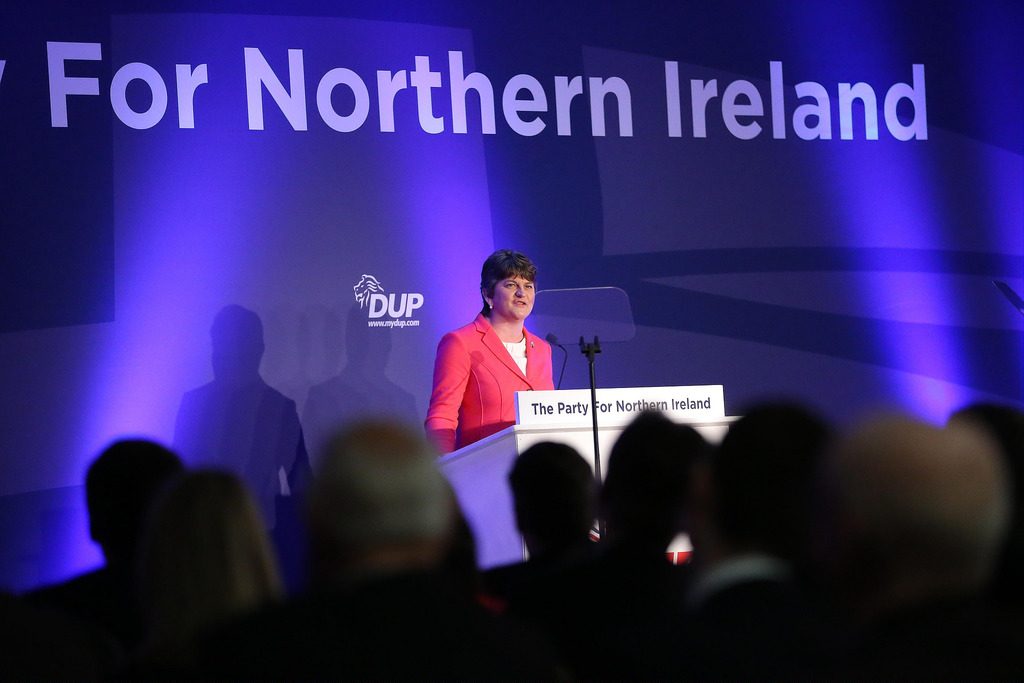 Yet in spite of how this might affect Theresa May’s Brexit stance it has been reported that the deal that has either been reached or that is still being discussed by the two parties is one of “confidence and supply”. Now in light of all this you might be tempted to ask:

What does “confidence and supply” mean?

How is this different from a coalition government?

A coalition would mean that members of the junior party would be entitled to positions within government and would also be obliged to take the government whip in all matters of legislation. In a “confidence and supply” arrangement the members of the junior party are entitled to vote however they please on other matters, i.e. Brexit, security, etc.

Most parliamentary democracies require an annual state budget, an appropriation bill, to be passed by parliament in order for a government to pay its way and enact its policies. If a government cannot pass such bills that it is called “loss of supply” and it must either then table or face a motion of confidence in itself. Loss of supply has lead to government shut-downs in America in 2013 and to the dismissal of governments in Australia in 1975.

What are motions of confidence?

Confidence motions are the heavy artillery of parliamentary democracy. A government that loses a motion of confidence in itself or a motion of no confidence tabled by the opposition parties must then immediately dissolve parliament and call a general election. In the past motions of confidence have brought down the Conservative minority government of Lord Salisbury in 1892 and, most recently, the Labour minority government of James Callaghan in 1979, which precipitated 18 years of Thatcherism in Britain.

Why doesn’t Labour try to make a deal with the DUP?

Because the DUP does not trust Jeremy Corbyn due to his support for IRA and Republican causes in the past. This makes a deal between Corbyn’s Labour party and the DUP very unlikely.

In that case why doesn’t Corbyn offer a deal to the other major party in Northern Ireland, Sinn Féin?

Because the Sinn Féin MPs in Northern Ireland do not take their seats in Westminster. They are an Irish Nationalist party committed to the cause of a United Ireland. As such Sinn Féin do not believe in swearing allegiance to the sovereign of the United Kingdom (in this case Queen Elizabeth II) as all MPs are required to do by law if they wish to sit and debate in the House of Commons. Although Jeremy Corbyn has often found allies with Sinn Féin members and causes, Gerry Adams, the leader of Sinn Féin, has since reiterated his party’s belief in abstentionism and hopes that Corbyn will understand due to his own long-standing as a man who sticks to his principles.

So why are the DUP more likely to deal with the Tories?

Because there has been a history of co-operation between the Unionist parties. This dates back to the time of the Irish Home Rule debates before the First World War. Then the Ulster Unionist parties aligned themselves with the Conservative party, which is officially known as the Conservative and Unionist party. This is a title that Theresa May was keen to highlight during her first speech as Prime Minister to quell worries about Scottish independence. More recently in 2009, David Cameron’s Conservative Party formed an electoral alliance with the Ulster Unionist Party for the 2010 general election.

Does this mean that there won’t be another general election?

It depends. If the agreement that is arranged between the Tories and the DUP is one of “confidence and supply” only, as recent reports have suggested, then this deal can only be a temporary solution to Theresa May’s troubles. If this happens her government will only be able to pass its Queen Speech and budgets at the very least, which is enough to stay in power.

But if the DUP are only voting in matters of this kind then that leaves the Tory party wide open to repeated attacks from the votes of the Progressive Alliance of the Labour, SNP, Liberal Democrat, Plaid Cymru and Green parties, whose votes currently stand at a grand total of 314 to the Tories’ 318.

It will be quite a tight squeeze as it is, but if Theresa May should face the same kind of defections from within her own ranks over issues such as Brexit and social care that she had been facing before the election, then it then it will prove to be a very exciting couple of years in parliament.

Has anything good come of this?

I believe so, yes. The political map of Britain has been redrawn and while the Tories may be the party that won the most seats and votes individually, the Labour Party, the Liberal Democrats, the Scottish National Party, Plaid Cymru and the Green Party all gained almost as many seats as the Tories and won over 3.25 million more votes. And they are all now ready and aligned against the evils and injustices soon to be wrought by this heartless Tory regime and its DUP allies.

Westminster has become, for the first time in a generation, a battle between good and evil and I look forward to seeing its outcome.

Youth Work Week at the Senedd