You’ve probably heard of the terms ‘LGBTQ+’ used before, but understanding what it means can be confusing. Here’s a handy guide to help aid your understanding.

The Asexual Visibility and Education Network (AVEN) have explored a range of different types of ways that people are attracted to each other, beyond the most commonly known type which is sexually. The main types they have identified are:

These attractions form orientations that make up part of your identity and can be used to explain how you experience attraction to others. The identities do not need to all align with each other, though many people experience it that way, but it is perfectly normal and okay if you don’t.

Sexual orientation is a way to explain your sexual attraction to others and it comes with a variety of different identities that explain that. Here are some of the common ones:

Some less common sexual orientations include:

A person’s sex is a biological description of the person’s biology. Sex is made up of:

Gender is the attitudes, feelings, and behaviours that a different cultures associate with a person’s biological sex.

Gender identity is one’s own self-definition of gender and how that person experiences it. There are many different gender identities, but some of the most recognised are:

Gender Expression is the way a person chooses to present their gender identity through interests, clothes, body language and many other forms of expression. This is usually taken from societal concepts, such as “girls wear pink” and “guys wear blue”, but, as always, this changes over time, as it once was considered to be the other way around.

Trans* is an umbrella term for used for many of the identities below: 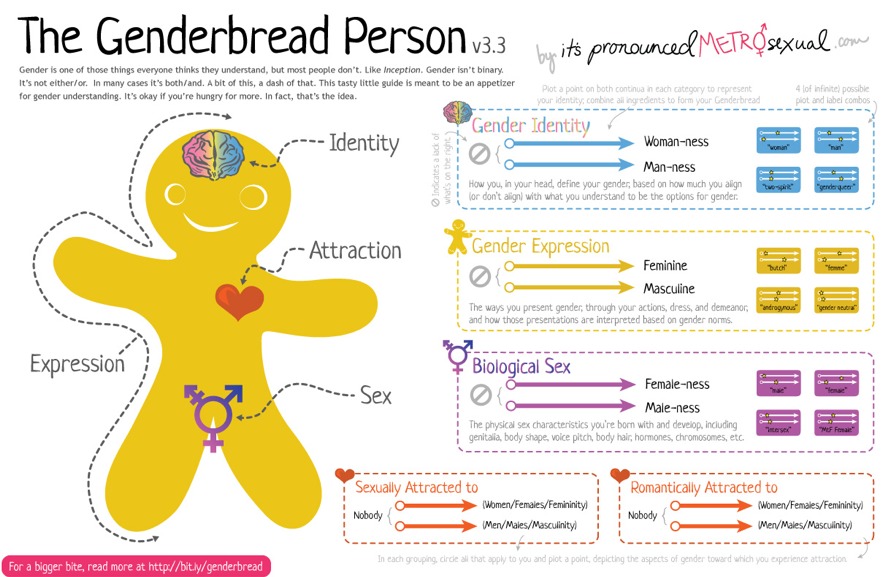 For more definitions, please look at Stonewall’s Glossary of Terms