We were invited by Stuart Parkinson, youth worker and himself a deaf man. He signs to us in British Sign Language, but he speaks too. Nevertheless, an interpreter is on hand to help us all get along.

Also on location is deaf film-maker and ITV apprentice, Safyan Iqbal. A member of the Deaf Cool Youth Club, he works full time at the ITV Wales News studio in Cardiff Bay. One of his first projects was an episode of Wales This Week, where he reported on various issues faced by deaf people in the UK. Lewis Vaughan Jones, a leading national newsreader, was one of the prominent deaf people profiled. Like LVJ, Saf also has a cochlear implant, which works by turning sound straight into vibration, bypassing the part of the ear which does not work. Saf himself features in the programme, showing a few clips of his training by senior ITV camera crew. 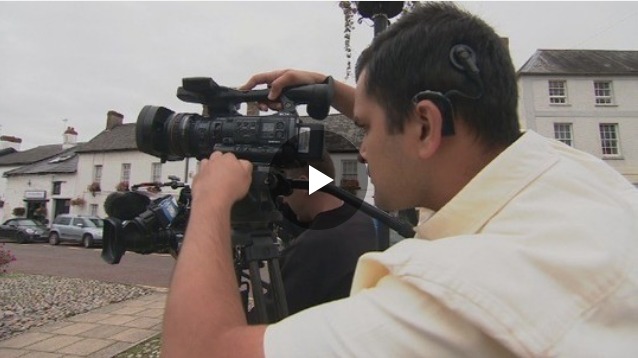 Stuart and Saf both explained to us that it is not always easy when you are deaf- especially as a young person. There are a great many difficulties which we might not even have considered previously.

Deaf young people need to embrace their identity with pride

Deaf people often suffer from poor mental health. If the world around them is full of hearing people, it can be difficult to find their deaf community and foster a healthy deaf identity. Deaf people like hearing people to look at them whilst speaking, so that they can lip-read. Stuart tells us that lip reading gets really tiring, so it’s really not a long term solution. It’s much better if the deaf person is able to have a conversation in British Sign Language (BSL), and Stuart would love to see families supporting their deaf members by getting everyone in the family learning BSL so they can communicate better.

It’s not just at home that deaf children face difficulties, either. Stuart says that he knows a photographer, a dentist, a midwife, a youth worker (himself), all of whom are deaf, but have succeeded down certain career trajectories in spite of their deafness. Stuart wants to teach young people to be proud of their deafness and not ashamed, but he knows from experience how difficult this can be.

Some parents have a strange approach: they hold off on teaching their deaf children BSL as they believe it might stop them from learning to speak. This is largely not the case. Some deaf children may go to a “mainstream” school- eg. not a school made up of other deaf people. Stuart did this, and never learned to sign until he was 18. He then came up against a new prejudice: other deaf people, who had attended a special deaf school, thought him inferior, as a mainstream school-goer.

The deaf centre has hit upon hard times

As well as Cardiff Deaf Cool Youth Club, which is held weekly at the Cardiff Deaf Centre, there is also a group for young children aged under 11, who aren’t old enough for Deaf Cool. The younger group is called Cardiff Creative Hands- a sign language reference- but only meets once a month. The deaf people of all ages who use the centre get access through it- whether at the physical location or elsewhere- to a wide range of activities. The centre hosts everything from coffee mornings and yoga classes to trips to Pen-y-Fan.

By participating in these activities, a deaf person can get involved with the deaf community in Cardiff- and further afield. Stuart tells us there are approximately 60 deaf young people in the city, and at other deaf centres such as Pontypridd they can sometimes have as many as 100 members at a time. The Cardiff Deaf Cool Youth club hope to take part in the Rhiwbina Light Festival.

Unfortunately, despite all the good the centre can do and its long history, it is empty much of the time. Stuart is only paid for about three hours a week, although he works much longer hours.

“I left college because there’s no support for deaf people”

Safyan’s education was turbulent at best, which is why he’s really stoked now to be working full time at ITV.  BSL was his first language, and Stuart helped him improve his English. He went to college, but left part way through the year. “They don’t want to help- they just give you [work] and say do it yourself. They help hearing people more than deaf people. I got really far behind so I left part way through the year.”

Things finally looked up for Saf when he went on a two day work experience placement at the BBC in Bristol, aged 19. the BBC See Hear programme was delivered exclusively to deaf young people. He went back to college the following year, attending Bridgend College where “they help people who struggle.” Saf soon became hungry for success- “every day after college: no time for a break, I volunteered, networked, worked every day to get my confidence up. I didn’t have time to sleep.” Now, at ITV, he’s really landed on his feet. They’ve bought their new apprentice a full range of tech- from an iPhone X to an Apple Watch- and they make sure he has someone to interpret when needed- FaceTiming an interpreter at times.

Whether Saf’s future is in journalism is in doubt, though. His real passion is for film-making, which is why he usually sits behind the camera and in the editing suite. He says he’d like to act in and direct his own movies one day.

Deaf provision is better in Scotland

Stuart explained more about the current situation for deaf people in Wales. He is worried about a lack of interpreters and a lack of deaf legislation in Wales. In Scotland, British Sign Language is an official language. Here, it is a recognised language but, unlike Welsh, no one has any obligation to ensure their speech is interpreted. A petition is set to change this- deadline 26 November to sign.

Stuart explained to us what the petition is all about: “Would you have an English teacher work in a school, whose first language is not English?” Of course not- so why must the deaf put up with sub-par sign language communication?

Our interpreter added some comments of her own. She said that the demand outstrips supply, that so many deaf people are going to university or to the theatre now that interpreters can’t keep up. The other day, she had to turn down an important hospital appointment with a deaf person, who needed an interpreter to communicate with the surgeons, because she was pre-booked.

The situation is looking dire for deaf people in Wales. But with a new national Budget just announced, big changes afoot in the Welsh Government and an increased wish from the Welsh deaf community to get in touch with outlets like The Sprout, things can only get better.