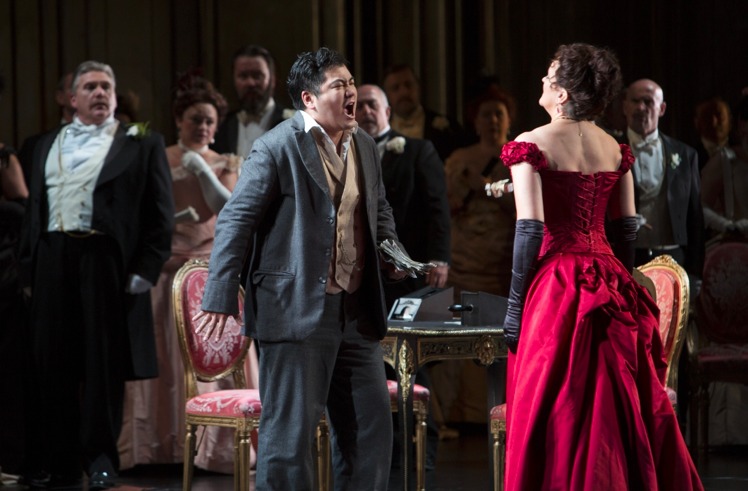 The new production of War and Peace remained a mighty effort from all involved at Welsh National Opera. So, it was time to look through the back catalogue of previous stagings from not too long ago.

La Traviata remains one of the most performed operas in the canon. Verdi got something right with this opera; most who see an opera might just make this their first outing. What could this revival production, directed by David McVicar, give us? It’s a safe bet, though not as remarkable as it really should be. During the heart-rending overture, we see an apartment for sale, with men from the retail world noting what is around, all covered in sheets. Though this is a nod to the story’s literary and factual foundations. This being a good idea, which is not expressed any further in the rest of the opera.

Though there are some stirring melodies, the structure is odd. Why Verdi would have a second act with two scenes (making some audience members think that it’s time for the second interval) and an opening and closing act in just one scene, is beyond me. The love affair is the full here, though there is little story elsewhere. Some discussions might be made about Germont, father of Alfredo, inviting to Violetta that she cannot have a relationship with his son. The ball scene in the second act is half filler (a meaty bull fighter and gypsy dancers pass the time) and all this leads up to a duel that Alfredo has got himself caught up in.

Sets here are almost gothic, true to the time period of Parisian glamour of the mid 19th century, lavish but not to an extremity. The singers must be exceptional in this opera, though I sensed a lack of chemistry between the leads. Our Violetta was Linda Richardson, given a proud and rousing interpretation of his fallen woman. Her love interest, Alfredo was here tackled by Kang Wang, in an ever increasing tenor of charm and intrigue. Roland Wood made a stellar Germont, villainous though heartfelt, loving though savage, his role was epitomised in his aria in scene one of the second act, saying she must leave him. Fluffy woodwind add to his plea, in ever more unbearable momentum to the forwarding of the plot.

The costumers are always grand, as we all know WNO have an exceptional wardrobe team. The set might be disagreeable and the lighting trying for bold exposures of the characters, but this is an opera that should always be attended for its music. WNO orchestra? I’ve said it all before at just how brilliant they are.

One for the traditionalist.

La Traviata continues at the WMC with further performances of War and Peace and La Cenerentola, then on tour.