Things have quietened down now that the Festival of Voice has been and gone. Though you don’t get a chance to see everything that’s on offer, English from National Theatre Wales and Quarantine got a second wind and we are very glad it did.

Not all of the festival is about song, as most of the acts would imply. Here lied a highly stimulating and thought-provoking lexicon, where performer Jonny Cotsen and us as an audience get to converse as words, phrases, slang and other reference points cropped up on screens. Jonny, who describes himself as “profoundly deaf” is the bulk of the show, though we do get to chat and discuss what we feel these words mean.

I started things off within the audience, as the phrase “any old iron”, which Jonny was unsure of and I merely stated it is the calling of a Rag and Bone Man, looking for scrap metal. What followed was 90 minutes of insights, perspectives and explanations as we made it all the way up to “English country dancing” , before the timer stopped. Brexit got ignored as it passed and we later realised it was the true “Elephant in the room” as this also emerged on the screens. Jonny relied on lip reading, so it was important for us to not cover our mouths and speak sensibly. 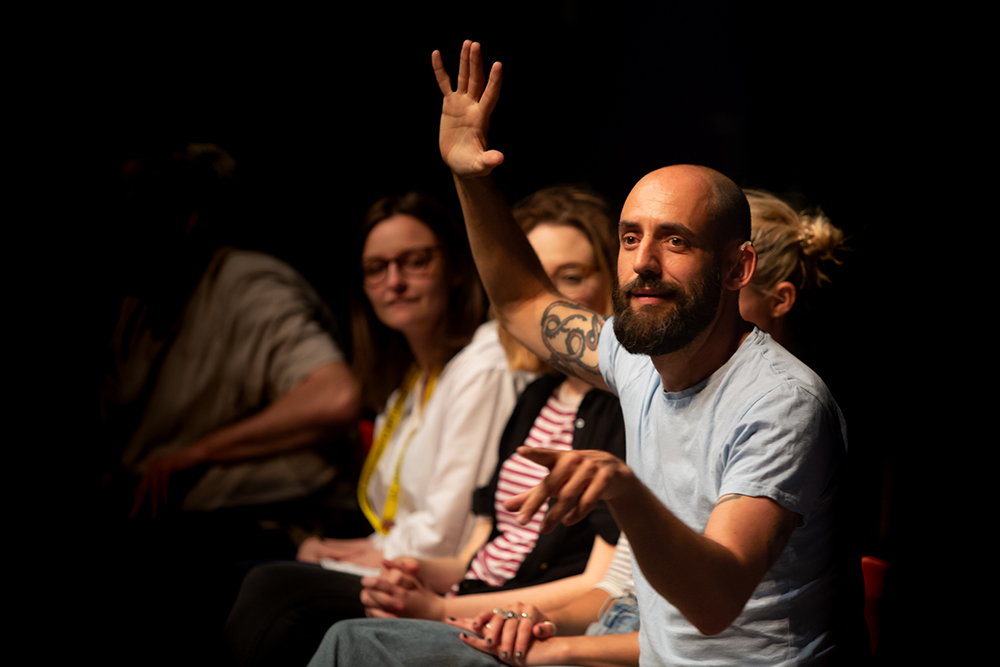 I found myself being a fair amount of the show, as few others sprung up to talk. Not only did we have a great time, I found we made revelations within moments as we talked our minds, deconstructing our language as we went. Video work added little else, as the attention was mostly on Jonny and the words themselves. At other time the square seating arrangement we were placed in was alive with conversation and laughter, some highlights included thoughts on double entendres (hearing the staff walkie talkie come with “we’ve got a big package for you here” before the show lingered large) and a discussion with an American who had come to see the show and had not yet seen a daffodil was also something to consider.

A highlight for me was the talk on “Empire” and what it really meant. Granted the British, Romans, Incas and other got recalled, though it is the Mongol Empire and what I surprised myself with that stayed with me. I stated the fact that over 16 million men today are related to Genghis Khan and that “THAT is the truest form of empire!”. Something I was quite proud of, if I do say so myself.

Tips for the show would be to have the audience slightly nearer in together so we could all see what all we had written for Jonny’s questions. Trim the video work as it distracts from the main elements of the show and also reduces in size the balloon scene, proving his point about a tiresome exercise with vibration and speech.

We just wanted it to go on longer, such as the ice breaking execution. High praise indeed!

English continues at the Wales Millennium Centre till 24th June 2018.

This review has been supported by the Wales Critic Fund.