We may only be 3 matches in the new season, but already Cardiff Blues find themselves in an all-too-familiar crisis.

Let’s be honest, Head Coach John Mulvihill couldn’t have got his Cardiff Blues career off to a worse start. Consecutive losses to a very weakened Leinster side, followed by last-minute defeats in Italy to both Benetton and Zebre have left fans in disbelief.

Perhaps most concerning for Mulvihill is the manner of the three defeats. Against Leinster, they squandered a 15 point lead; vs Benetton they lost a 5 point advantage with a last minute try and conversion; and perhaps most shockingly of all, losing to Zebre having been 21-0 up after 11 minutes.

Make no mistake, the 11th May suddenly feels like a very long time ago and fans are left questioning how a side they lifted the Challenge Cup in such spectacular fashion last season could get off to such a poor start. The pressure is already building on the Australian.

That’s why this evening’s match against Munster really could be make or break for the new coach.

If Mulvihill and his squad have any future together, they need to put in one hell of a performance tonight, against a Munster side who put nearly 50 points past the Ospreys last weekend.

There needs to be a real statement of intent from Mulvers and his charges that his squad wants to play for him.

A victory this evening would give Mulvihill a clean slate. A fresh start. I’m not saying that all would be forgiven, but it would put a different slant on those opening three defeats.

He names a strong side, reuniting the 10-15 axis of Jarrod Evans and Gareth Anscombe, a combination that worked so well last season, for the first time since Bilbao. Elsewhere, Willis Halaholo rejoins teammate Ray Lee-Lo in midfield.

In the back row, Nick Williams and captain Elis Jenkins both return, having sat out the loss to Zebre.

Prop Rhys Gill makes his 100th appearance for the Cardiff Blues, with Macauley Cook set to make his 150th, if required from the bench. 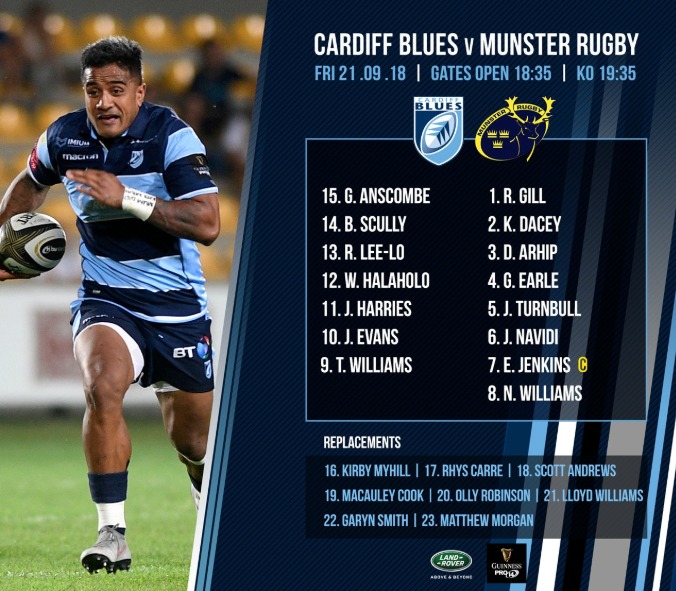 From the changing rooms:

Josh Navidi
“Sitting in the stands during that Leinster game it was phenomenal – the amount of support we had and the noise they made – hopefully everyone can come down again and deliver the same emotion and reaction.

“In all those little breaks in play, you really hear the crowd and it drives you on.”

John Mulvihill
“These guys will front up. Take them out there and they’re ready to fight. That’s what we want, we need it every week and I’m sure we’ll get it tomorrow night,” said Mulvihill.

“The review was pretty tough. It wasn’t for the faint-hearted. Coming out of that preview, they absolutely ripped into each other in training.

Tickets are going well this morning.

The following areas are now sold out but there is still plenty of room.