Posted on: October 8, 2020   Posted by: halynasadventures

I wrote this blog last year before coronavirus kicked off whilst I was a student at a university in Cardiff. I allowed this blog post to gather dust in my documents for far too long but didn’t want to hold back any longer. Better late than never, right?! I decided that it would be a great idea to share my experience of my social media cleanse especially as due to the current pandemic, I’ve found myself spending more and more time on my phone. Perhaps another social media cleanse is needed… Anyway, for now, please enjoy my blog post written in November 2019 in honour of World Mental Health Day 2020.

How it all started…

In many hopeless attempts to become more organised, I have always turned to writing to-do lists to bring order to the chaos of responsibilities buzzing around my brain. For a while, this really helped me to stay focussed and I became better able to deal with the stresses of daily life. Recently, however, I’ve noticed that these to-do lists don’t manage to get completed if even written at all! I decided I needed an intervention; something that would free up lots of time so I could get more things done without losing the joys of doing the things I love, like seeing my friends. That’s when someone mentioned to me about doing a week-long social media cleanse… and here we are.

Here’s a list of my banned apps for the week: 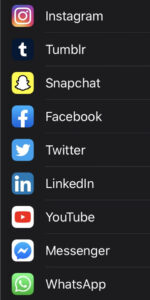 Today was the first day of my social media cleanse. I know this sounds dramatic but at that moment when I opened my eyes, reached for my phone and saw nothing but one text from my girlfriend, I felt so unpopular. My morning routine was shaken: I couldn’t browse Snapchat to see all the nights out I’d missed out on, nor could I go to Twitter to get my daily dose of shade (and news).

After 15 minutes of staring at the ceiling, I decided to go up and get ready for the day. It was only 7:15 AM but I had to catch a bus at 8:30 AM, so normally I’d be in a frantic rush to get ready. However, after 45 minutes, I was washed, dressed, fed and wondering where all this extra time came from.

When I got to university, one of my friends immediately asked me why I wasn’t replying to their messages. Turns out that they had sent me an array of cat memes that “demanded immediate attention”. *Eye roll*. I noted that this week is going to be most difficult in terms of communication, but I reminded my friends/family they could get hold of me by text/phone.

Without the temptation of social media, I felt a lot more comfortable keeping my phone in my pocket or my bag because I knew that I wouldn’t have any notifications to check on. It made it a lot easier to focus during lectures even if they were boring because taking notes and paying attention is better than sitting doing nothing for two hours.

However, even though I didn’t have access to my social media accounts, a lot of the time I was thinking about what I could be missing out on. So even without access to social media, I was still distracted by thinking about social media. This is when I realised that this week is going to be exactly what I needed.

Today is my sisters birthday. It has been her birthday for 31 years, and despite me being alive to celebrate it with her for 21 years, I still had an ounce of doubt as to whether I had the correct date. I longed to go on Facebook to double-check, but I had to trust my gut (which was correct – yay). In true annoying little sister spirit, I also wanted to post a selection of embarrassing photos on social media to commemorate her being a year older. Instead, a heartfelt phone call had to do.

Going social media free was easier today than yesterday. I managed to shower and have breakfast, put on a load of washing, check all my emails and practice Duolingo in under an hour. I went to town and spent the afternoon with my friends. Later in the day, I got a good chunk of one of my assignments done too! I was able to finish my to-do list for the day, with lots more time to spare. Everything felt great until I couldn’t sleep at night. I was desperate to kill time by scrolling mindlessly on my phone until my eyes got heavier and I fell asleep. I was uncomfortable just lying there, tossing and turning for what felt like an eternity, but I eventually managed to get to sleep.

I woke up feeling so refreshed – something I can’t remember feeling for years. I googled the impacts of using your phone before bed and found that phone usage actually keeps you awake for longer and can also disrupt your sleep pattern, so you wake up feeling groggier. After this week is over, I am definitely going to try and not use my phone before bed.

If you know me well, you’ll know I always complain about my battery life being rubbish (curse you iPhone battery). However, I’ve noticed that my phone battery has been lasting way longer over the past few days. It turns out that my battery isn’t to blame for my phone dying so quickly, but I am! I was appalled to see how much time I had previously spent on my phone – no wonder I’ve been so unproductive recently! 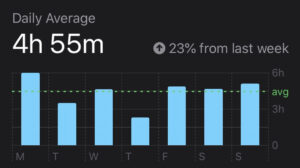 Today was a busy day at placement and so it was the first day that I didn’t think about being on social media. In the evening, I went bowling and for food with my friends and had a great time. I felt free from the restraints of my phone and able to just get on with my life. We met some really lovely people who asked to add us on social media to keep in touch. Isn’t it strange how communication has gone from asking for someone’s phone number to asking for their Instagram handle?

The end of the working week was drawing to a close and my body could tell. I was exhausted! With such lack of concentration today, I was itching to be on my phone. I recognised that this was extremely unhealthy – sort of like I’m addicted to my phone and now I’m craving it. Instead of relapsing, it made me want to not use my phone even more.

The most difficult part of not having social media today was when I went to get the bus home, the bus was late and the live bus times on the Cardiff Bus app weren’t working. I wanted to log in to Twitter to direct message Cardiff Bus to see how long the bus would be, if the service is still running at all. Instead, I waited for the bus, which in the end, only came 10 minutes late. I remembered how my mum told me about how when she was growing up, she would just have to wait for real life to happen, rather than being able to track real-life via technology. Most things in today’s society are available at the touch of a button – maybe that’s why people today are a lot less patient.

Today is the day of a festival that I would have loved to go and see, but I couldn’t get tickets to go. A couple of my friends are going and so they’ll see some of my favourite bands including The 1975 and The Killers. If I could go on social media, I would have been able to see the videos that my friends took, but also, I would have felt like I was missing out big time, so it’s probably better that I couldn’t check.

My friend invited me over to her house for a small get together, but when I got there, there was a lot of people who I didn’t know. I felt a little bit uncomfortable having to socialise with these strangers. Normally, I would have just been on social media to avoid interaction with people that I didn’t know. Instead, I was forced to socialise and push myself out of my comfort zone. I found that socialising wasn’t as bad as I initially expected and I ended up enjoying myself.

Tomorrow is the day in which I can go on social media again, but I don’t miss it that much. I feel like I have a lot more time to myself to focus on the things that actually matter.

I would recommend going social media free to anyone, especially if you find yourself mindlessly scrolling when you’re bored or checking your phone when you’re in a conversation with someone else. Social media has become a fun part of modern society, but it is not essential to happiness. I noticed myself to be more productive and organised and consequently, less stressed and happier without social media. Going forward, I’m going to use social media but be a lot more mindful about how often I use it and what I use it for.

After reading back this blog post after 10 months of writing it, I’ve realised that I’ve begun to slip back into old habits with social media during the pandemic. I think for me, it’s time to have another go at intentionally disconnected from my social channels for a while so that I can focus on what’s important.

Would you give a social media cleanse a go?

When all you’re left with is what could have been…