The annual Ocean Film Festival is sweeping towards Cardiff with a brand new selection of the world’s most amazing ocean films, from both above and below the surface.

Brought to you by the team behind the Banff Film Festival UK Tour, this collection of short films celebrates divers, paddlers, surfers and oceanographers who live for the sea’s salt spray. Be wowed at the mind blowing marine life; exhilarated by the power of the waves, and inspired by the characters who dedicate their lives to answering the call of the ocean.

Five years in the making, The Big Wave Project follows a tight-knit crew of leading big wave surfers who are working together to attempt a personal goal that drills to core passion of surfing: Riding the World’s Biggest Wave. Hear candid, personal, no-holds-barred accounts of the real fear of death walk side by side with ultimate personal glory and the humbling power of the ocean..

TOUCHED BY THE OCEAN
30 minutes

Latvian friends Karlis and Gints have a second-hand rowing boat, no rowing experience and a grand plan: to become the first team ever to row across the South Atlantic Ocean, from Namibia to Brazil. Touched by the Ocean joins them on a raucous tale of adventure, dedication and friendship.

A multi-award winning film that takes us on a provocative journey into the ocean realm, witnessing a critical moment in time when the marine world is on a precipice. Featuring passionate advocates for ocean preservation, BLUE takes us into their world where the story of our changing ocean is unfolding. Meet inspiring individuals who are defending habitats, combating marine pollution and fighting for the protection of keystone species.

Achmat had high hopes. He had a budding sports career with dreams of representing South Africa, but this all changed on August the 13th 2006 when he had his first meeting with Scarlet. Little did Achmat know, that this meeting with a 4.7m Great White Shark named Scarlet would be the beginning of an 11-year bond.

Steve was not your average Londoner. For a start he was a Kiwi, and instead of wallpaper his house was decorated with charts and yacht plans. After 9 years toiling in the back garden of his South London home, his 44ft ocean-going yacht was ready to set sail. The first obstacle of course was how to get the steel vessel from the back yard of a small suburban street to the London docks. ‘Kiwi Breeze’ tells the inspirational story of Steve’s 24,000km voyage home to New Zealand… and his determination to achieve his dream.

ADDITIONAL FILMS WILL SOON BE ANNOUNCED.
The film programme may be subject to slight change. 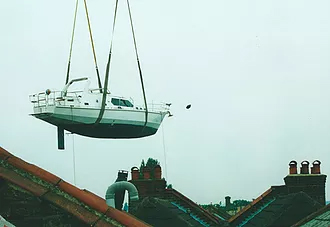 If you’d like to suggest an event for our what’s on guide, please submit them via our contact page.