On my first day attending Rawffest, I was welcomed by very friendly volunteers and staff who were approachable and helpful throughout the festival. I went down to the basement where we would all meet each other whilst doing icebreakers. Fun ones I’ve done in drama classes before but thoroughly enjoy. This included being in teams having to order our selves correctly in a line based on a characteristic (e.g. date of birth) a nice little friendly competition. Another icebreaker we did was walking around the room and handshake, hi5, hug as many people within a time limit which was very sweet, which led to walking around the room touching the closest persons hand and telling that person something you’re passionate about, something you’re excited about the festival and something you’re anxious about the festival. A lovely way to learn about the others around you. 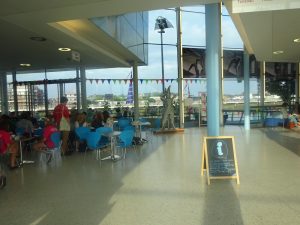 I later attended a performance by the Volcano company entitled “WE-REALLY-WANT-TO-WIN-BUT-WE-DON’T-WANT-TO-TRY-TOO-HARD”. A piece about sports. I felt it had a bit of tongue-in-cheek humour around the idea of teamwork and competition whilst also displaying how beautiful sport can be. They also used Queen’s “Don’t Stop Me Now” in a scene of their piece which I believe always goes down well. 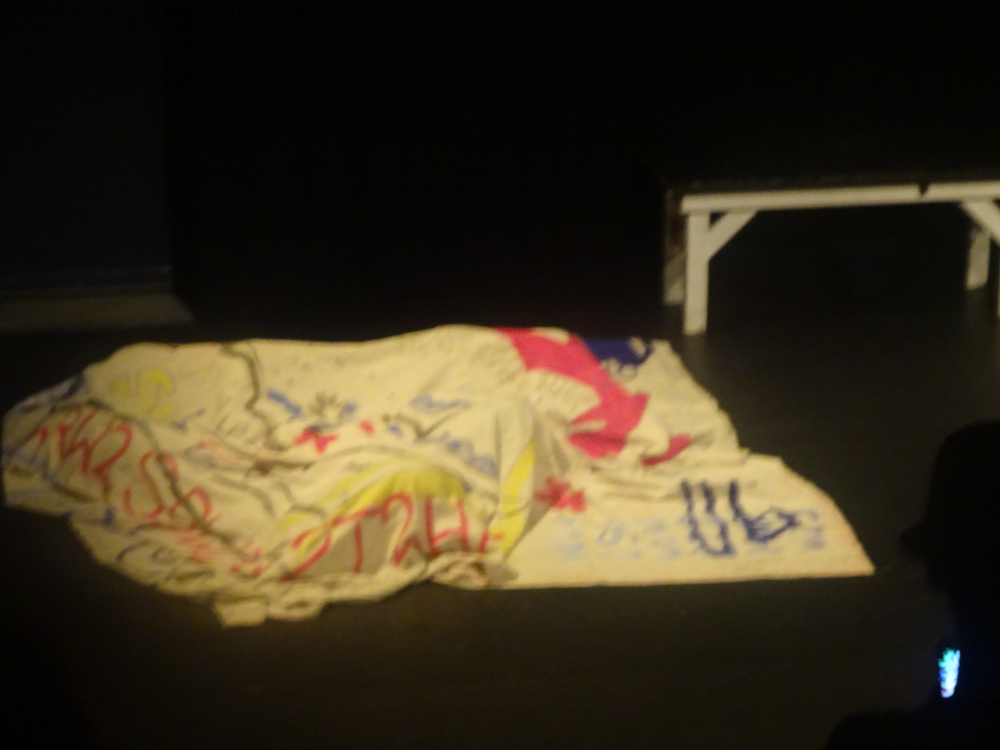 After this, I went back down to the basement to record the participants learning about how to do a Twmpath. I wasn’t quite sure what a Twmpath was when I first read it but when I saw it I felt very nostalgic about my primary school days where we’d learn how to do it around St. Davids Day. A Twmpath is a Welsh dance done to folk music. It warmed my heart to watch everyone enjoying themselves trying not to mess up the dance, part of me wishes I took part but I’m glad to have filmed it. It was looking very beautiful. Next up was a Silent Twmpath, which was a weird but cool experience. You’d hear the caller through the microphone and the music was already set so you could already hear it through your headphones. The folk band seemed to find very amusing that they couldn’t play the instruments.

At the end of this day, we all enjoyed a silent disco, being able to switch the genre through the headphones. I’ve always wanted to participate in a silent disco so I was thoroughly enjoying this. Cheesy pop and songs with set choreography seemed to go down well a lot with the other participants, whether it was doing the Macarena, dancing to Uptown Girl or rocking out to Green Day, we were all having fun. 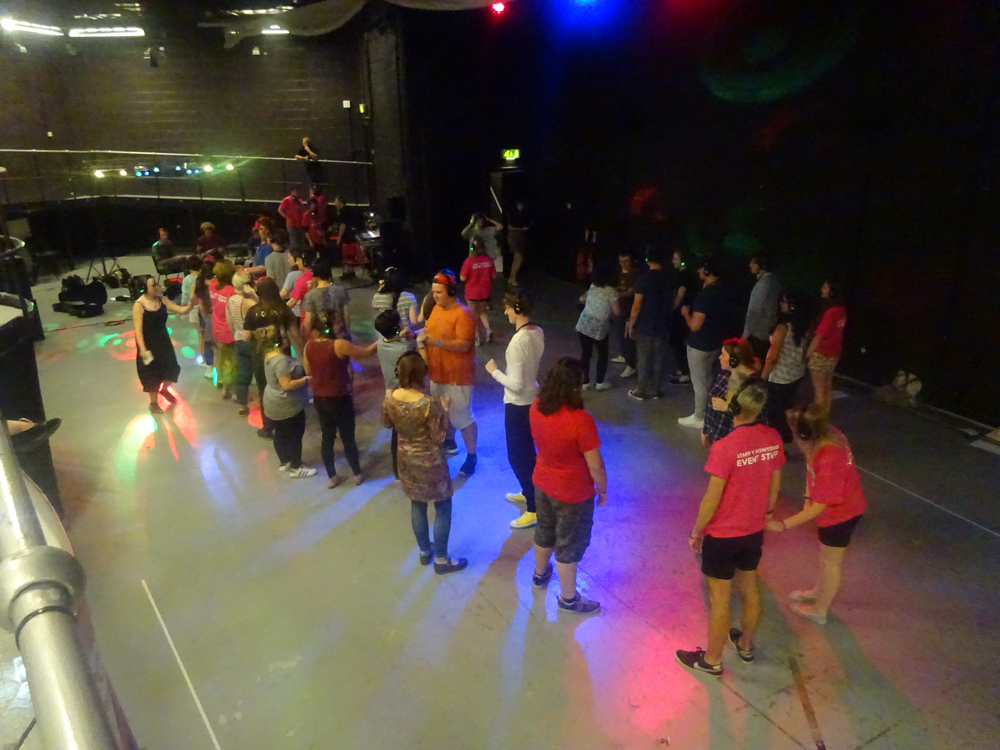 Participants attempting to do a Silent Twmpath

The first part of the next day I attended a Q&A with Phil George, chair of art council of Wales. Before the questions started, he explained who he was, to me he sounded very passionate about his work. I found it very interesting hearing the questions he was asked and how things may change now in relation to Brexit. Unfortunately, I felt that the time for questions was cut a bit short. 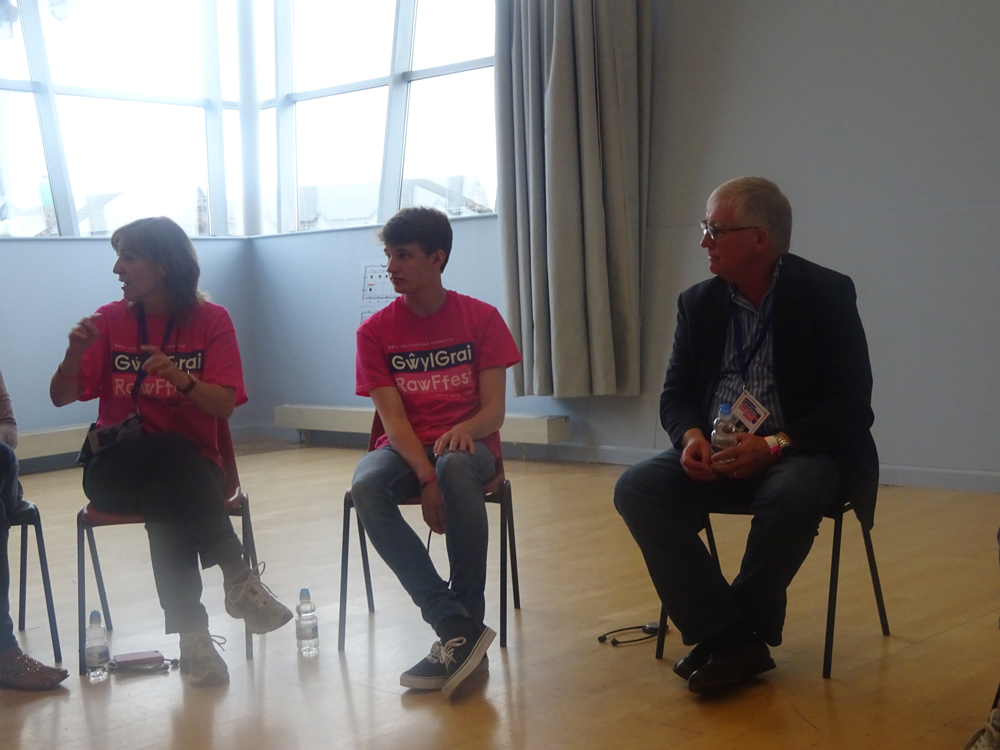 I was pretty disappointed by the next workshop I attended. It was the Doctor Who Game Maker Workshop. The thing I felt let down by is that the game was already live on the website. If it was a case of this is a game that was planning to be live on the website at some point I think that could’ve been good. The participants would’ve been the first to publish their games and it would’ve been a good chance for them to receive feedback on how easy it to use or any suggestions on how it could be made better. We also spent a bit of time having to download chrome which made me feel I was back at school. We also had to work in pairs, which could’ve disappointed people who may have had an idea in their head, that they wouldn’t want to compromise (this is an advantage of it being live). Although I had my issues with it, I did enjoy working in pairs and a lot of others seemed like they were having fun. I would’ve just preferred to have attended a different workshop had I known that this would’ve been the case. 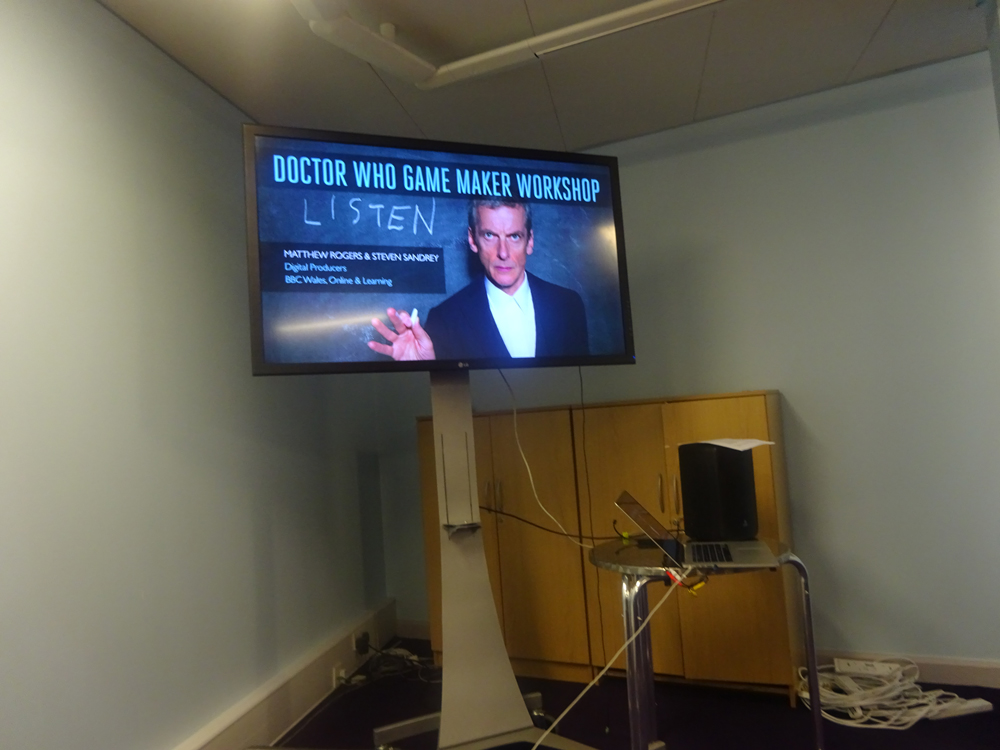 The next performance I attended was a remake of Roald Dahl’s “Way Up to Heaven”. The Fosters were played by 3 different characters each, whilst Walter and Narrator would switch roles. It was very amusing to watch and we could all relate to Mrs. Foster’s frustration with her husband.

I would next attend a workshop known as “Opera. But not as you know it.” They had been doing workshops throughout the day and I had attended the last one. Throughout the day they had been working with participants to create a mini opera. Being the last class, we would have to write a final scene. As a class, we worked together, to think up ideas on how we wanted it to end and in mini groups, we thought up ideas on the words we would want the singers to use. It was a lot of fun and very beautiful watching the singers act and sing our pieces that we would create, this would shortly be performed later after “The Bargoed Miracle”. 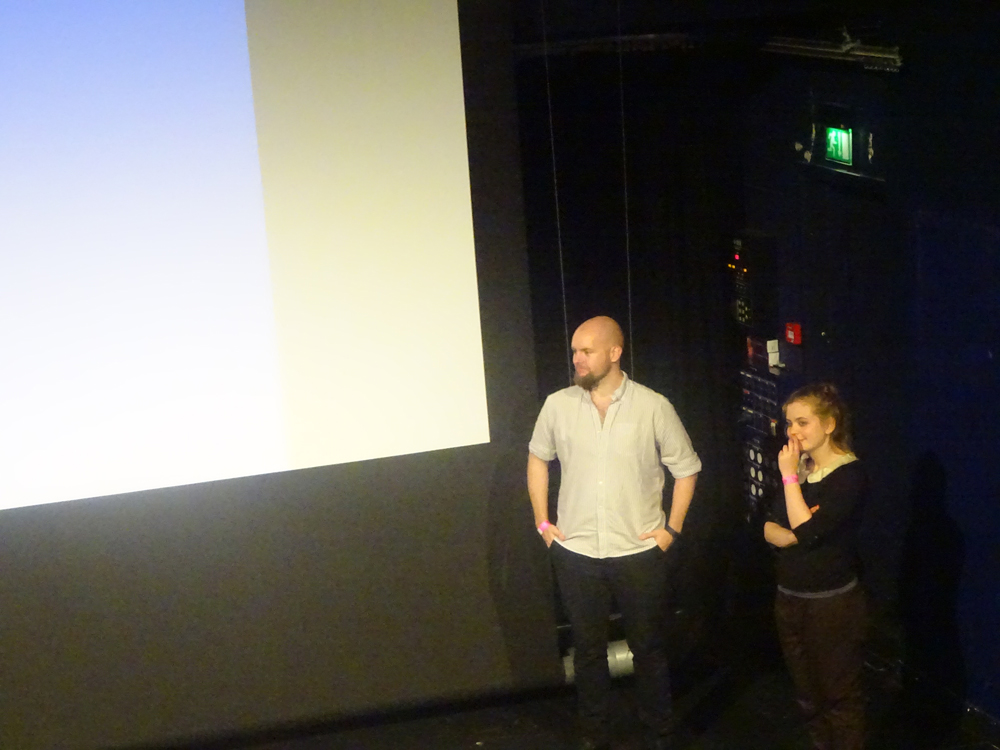 Opera singers about to perform

“The Bargoed Miracle” had good humour around the characteristics of someone living in the area, especially Jesus.

At the end of the day, we got the chance to sit down in a theatre and enjoy a variety of music as part of “Shuffle Live”. I thoroughly enjoyed the music but felt it wasn’t worth the title “Shuffle Live” because it didn’t have that much variety in genres. I did enjoy these particular musicians especially “The Honest Poet” “Catalyst” and “Hang 11”.

Ironfoot wrote a review and an interview on other workshops he attended this day.

My last day of RawFfest (not last day of the festival, unfortunately I wasn’t able to attend the Sunday) I first attended the Fab Lab workshop. Fab Lab is a 3D printing company, which I found fascinating to learn about. We were set the task to make a car. I was terrible at this task, never have been good at design and technology but enjoyed working in a group. We did get it to work a little. 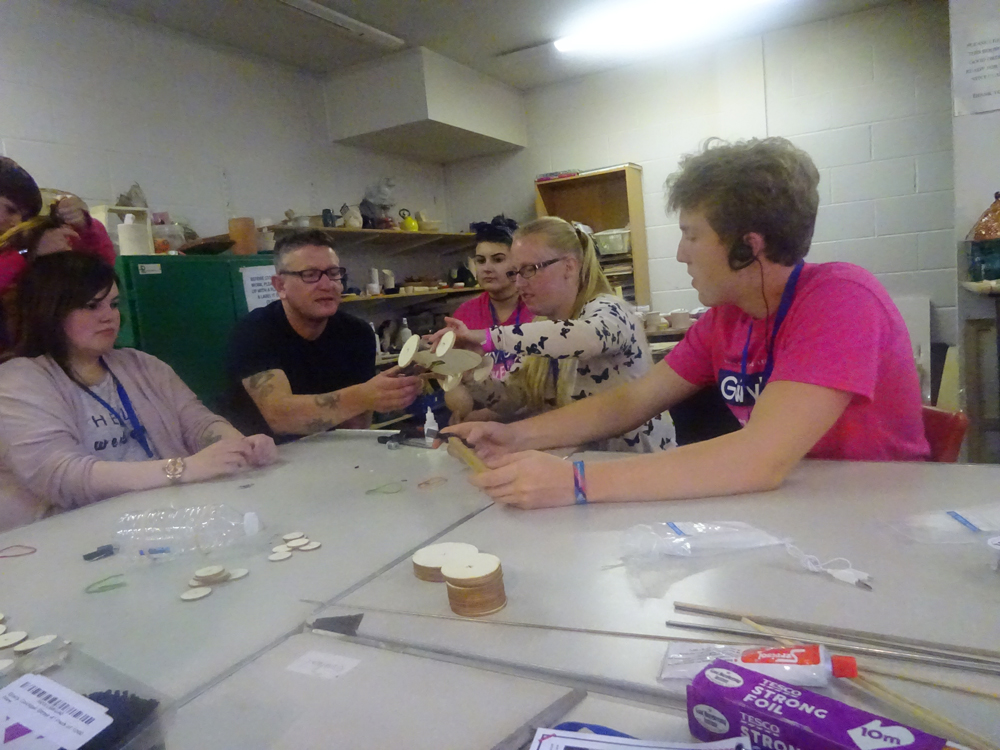 Making a car using materials created by a 3D printer

The next workshop was the Screen Printing Masterclass, which disappointed me a bit. With this one, I’m not sure if it was through my own misunderstanding of what was going on, but it didn’t actually feel like a class. It was no longer set in a room, it was set in the foyer, I was told that it was going to be half an hour later. When I returned, people (who didn’t seem to be a part of the class) were queuing for a t-shirt. One of the volunteers explained to one of the screen printers that I was here for the class. He showed me what they do to make the screen print and then I would be told how to pull down the colour, we checked if the colour went in and I got my very own RawFfest t-shirt which I would then leave with them for half an hour. I’m happy with my new t-shirt but this definitely did not feel like a class. This could’ve easily been done during break times. I felt a lot of time was wasted and I could’ve attended a different workshop. 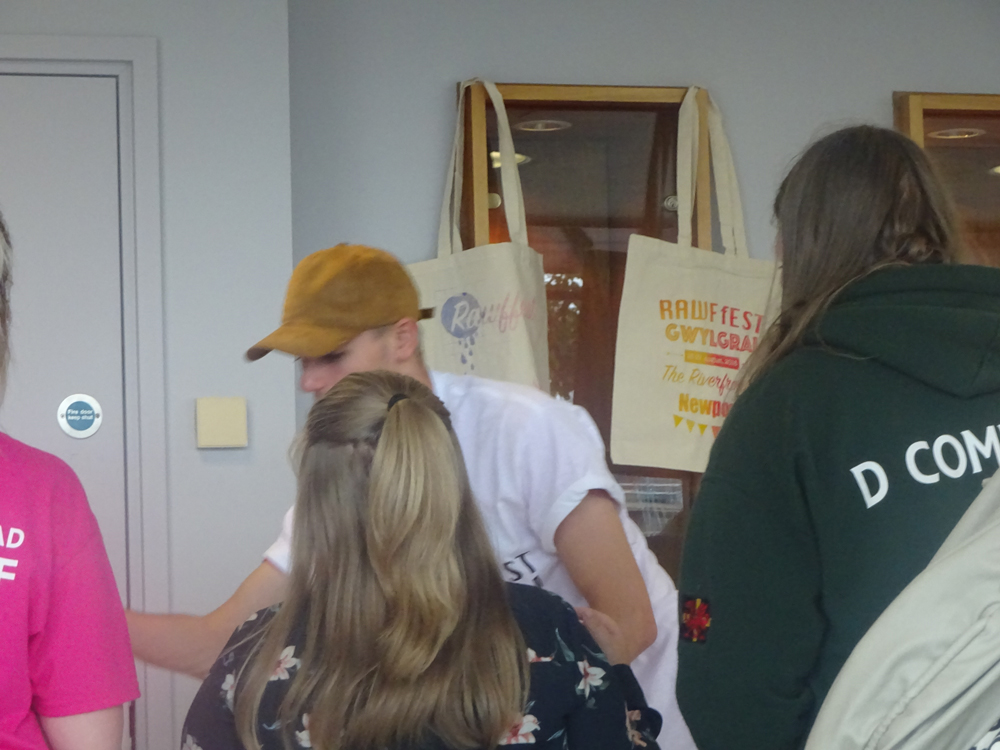 Whilst waiting for my t-shirt, a flashmob (there were flashmob rehearsal workshops throughout the festival) appeared in the foyer. This was a lot of fun to watch and put everyone in an upbeat mood feeling like a part of something.

I next attended “Ballet with Attitude”. I enjoyed learning the words for different dance moves (though admittedly, I have already forgotten them). We started off dancing with our arms on the wooden pole, learning different plies and other moves then we progressed away from the pole learning other moves including pirouettes which was a lot of fun but I found it hard to not get dizzy. It was set to lovely music & the teacher gave us very good instruction on how to make a move better and why you have to do a move a certain way and how it can affect your body. 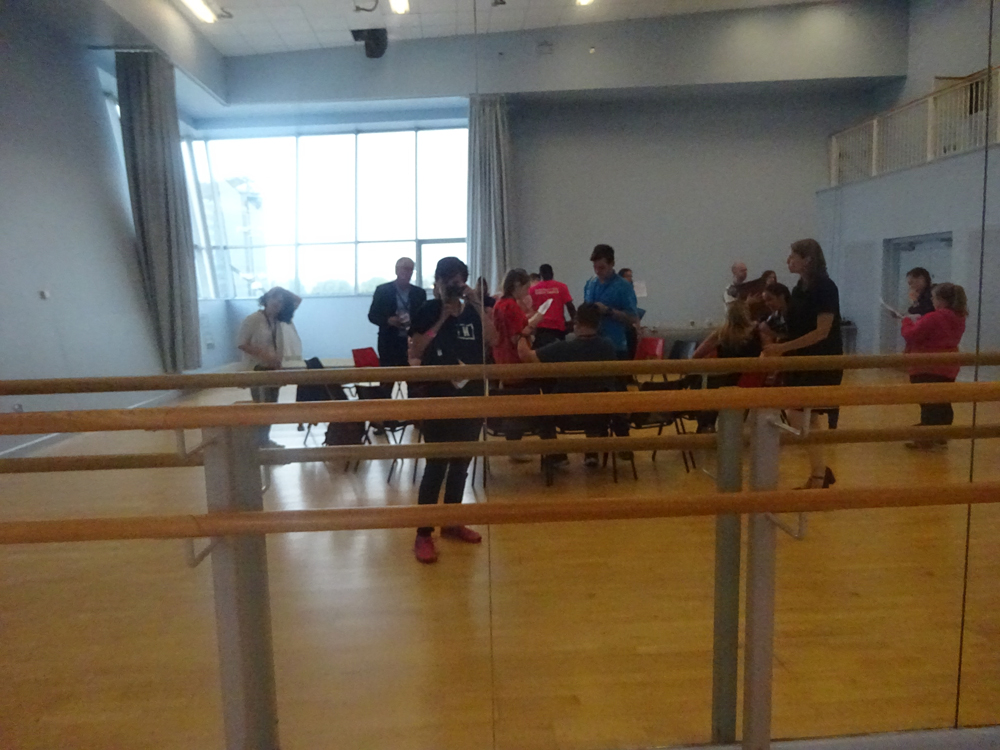 I was happy to see my next workshop facilitated by someone whose taught me before. Jason Camilleri (aka Dreggz) was teaching the workshop “Gobblefunking* around with words”. The idea of the workshop is to challenge the idea of what it means to be a youth through the use of words. The workshop consisted of him asking us the difference between rap and poetry, showing us music that was an important part of the evolution of rap and setting us tasks. The first task was to write an object on one paper and then to describe it in an unusual way on another. He mixed up the objects and called them all out to demonstrate how things can match up unexpectedly. The next task was to write a word that would negatively describe a young person, after that we had to make a definition that would mean the word is positive. Our last task was to work in teams to make our descriptions into an order that would set well for a poem. We later performed this in front of others. 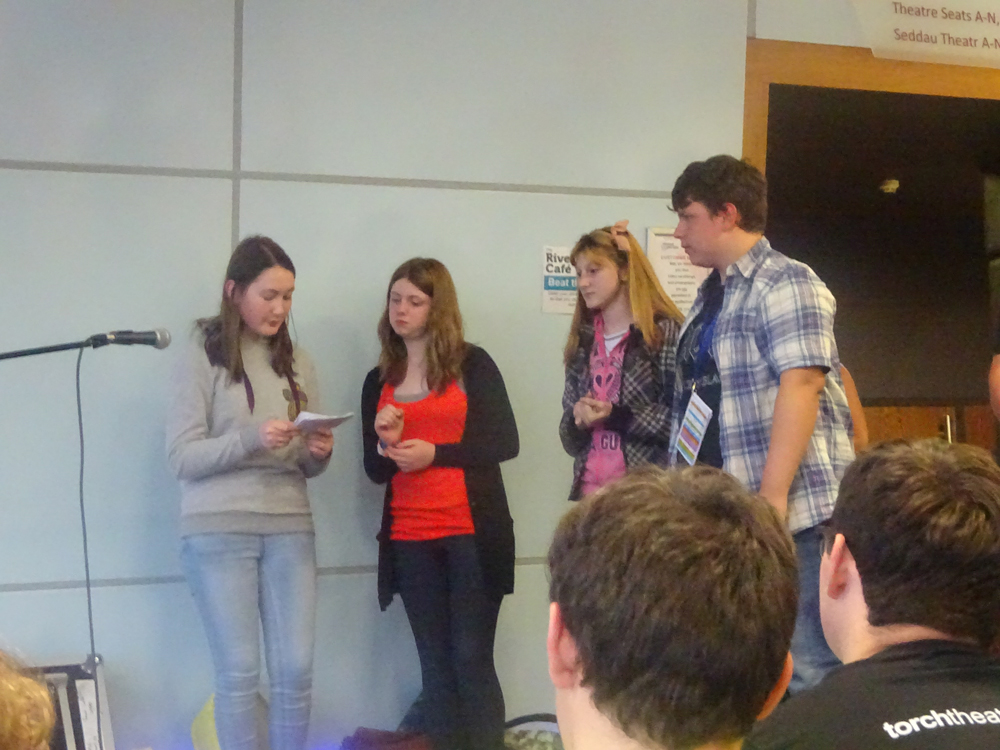 The next performance I would be seeing is “Tales From A Small Town”.  The title is self-explanatory, the way it was portrayed was very amusing. One of the first scenes was a particular favourite of mine, the narrators explaining about one of the characters being lonely with her cats, to then seeing her cats dance with her in a romantic way. Tales of a fisherman with a lost son at sea, locals gossiping about a cheating couple and a peculiar B&B owner.

After this, we saw a performance called “Changed”. A metaphorical piece about being different in a society that doesn’t accept you. I felt this was a very important issue to address and felt very personal if you’ve ever felt like some sort of outcast. It felt quite empowering because it showed the good and bad sides of humanity.

The last performance I would see was a black light theatre piece called “Hummadruz” which I thoroughly enjoyed and I personally felt was a lovely end to my RawFfest experience. Interesting music, amusing puppetry and illusions.

I had a great time at this festival and believe it to be a wonderful opportunity for young people to demonstrate their talents or build their confidence. It is also felt very accessible to people of different abilities.I wish I could’ve stayed longer especially to see the fashion show and If I were to attend again I’d like to make myself more organized with attending on time and deciding on my workshops beforehand. Something I feel that would add to the festival is workshops around circus skills.

I would rate this festival 8/10

Free and Cheap Things to Do in Cardiff 23-30 August

These 8 Hottest Music Festivals Will Make Your Summer Unforgettable