New opera has been a large element of WNOs output this year. With Figaro Gets Divorce and In Parenthesis, the joy of creating original opera has never been more predominantly exciting.

Reviews: WNO – Figaro Gets A Divorce & In Parenthesis @ WMC

The life of André Tchaikowsky (not to be confused with the great Russian composer) is extraordinary in anyone’s eyes. Having been brought up in the Jewish ghetto of Warsaw, escaping it by being dressed up as a little girl and later, having his foreskin removed (I cross my legs every time I hear this), all contributed to the character building of this remarkable musician. As a pianist, he is regarded as phenomenal, playing from memory and having a way with the instruments have few have achieved. He lives on after death, with his very own skull being used by the RSC in productions of Hamlet.

As a composer, his work is little, but his plan for an opera was 14 years in the making. His love of the Bard, would amount to an opera almost finished, but taking 30 years to finally be staged (the world premier was at the Bregenz Festival in 2013). What was English National Opera’s loss (they expressed interest, then declined to have it staged) is our Welsh counterpart’s gain, in what might be the most gripping new opera out of this trio of premiers this year.

I know the story well, as I had a very good English teacher share with us the play with us in high school. The beauty of this play is its juxtaposing of high drama and comedy. It’s usually defined as a “problem play”, as the main element of the work is the right of a contract and the act of execution, if agreements aren’t met.

Deeply depressed Antonio aims to assist his dear friend Bassanio by helping him obtain money for a dowry to woo Portia. By lending from Shylock, Antonio is bound to sacrifice a pound of his own flesh, if the money is not returned in the agreed time. Portia, who can only be won in marriage by whomever finds her portrait in the mysterious caskets, hopes to find the love of her life. Bassanio is victorious, only news has come about Antonio: he is ruined. The fleet of ships where his money was tied up are lost at sea. Shylock is now baying for his pound of flesh and the agreement must be acted upon. Discreetly, Portia and her companion Nerissa disguise themselves as a lawyer and a clerk, to help Antonio. Will they succeed?

A very impressive cast is laid out for us here: As Shylock, Lester Lynch in a cyclonic performance, delivers an intense portrayal of the Jewish money lender. Martin Wölfel is a calm Antonio, whose countertenor voice is not always clear or audible. Strangely, the quietness of his voice compliments the melancholy of his character. Mark Le Brocq is a wonderful Bassanio and proves his worth in a role very well suited to him. David Stout (who we saw in both Figaro outings this year) is a telling Gratiano, cunning and sly, yet never a horrible person. He charms more than anything, in anything he sings in. Jessica, Shylock’s daughter is a brief and sublime role for Lauren Michelle (who sang in Cardiff BBC Singer of the World last year) and her lover, Lorenzo is the stocky and charming Bruce Sledge.

Sarah Castle is the perfect Portia: curt but fair, loving and cheeky, she never fails to be compelling on the stage. Her companion Nerrissa is the often funny and merry Verena Gunz, who at one point appears to go in for a kiss, which mirrors Antonio’s apparent  love for Bassanio (in this production). Juliusz Kubiak is a marvellous witty Prince of Aragon, floundering around Portia’s maze, appearing at one point to have just urinated in there. Wade Lewin as the Prince of Morocco, is a dashing dancer who flipped and bounced around the maze, slitting his throat, on realising he was unsuccessful in his efforts. This two characters are silent roles and can be interpreted in curious ways. Though the absence of the line “All that glitters, is not gold” is missed.

From the director of last year’s wonderful Peter Pan, Keith Warner gives us an update to what appears to the 1920s. Huge bank vault cupboards are brilliantly utilised in the staging as they tower over the singers. The mood is dark and at times somber. The racist elements are not so much Jewish as black vs. white, since this production sees Shylock as a black gentleman, in a city which could have been anywhere in Europe at that time (not just Venice). You hear “Jew” used as slur in this, when you feel they really mean the awful “n word”. 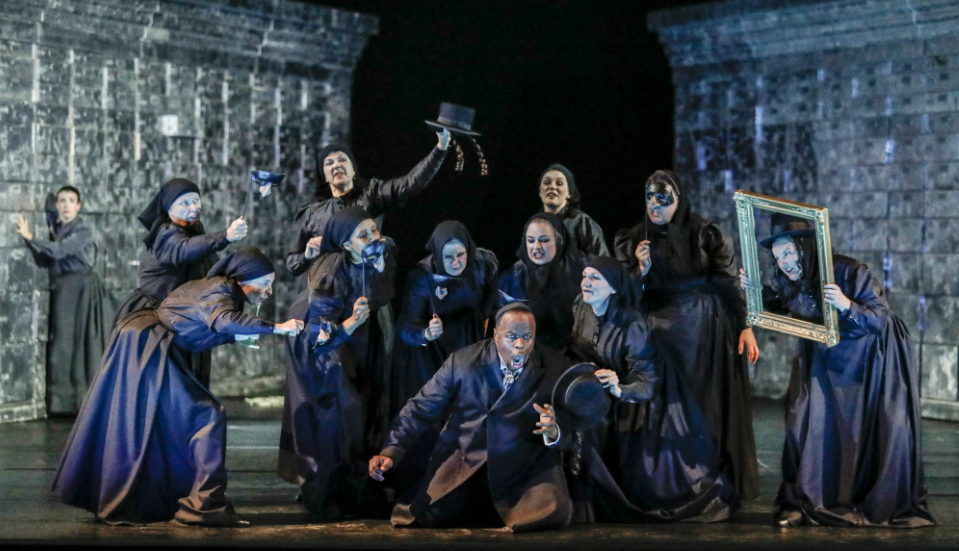 I was after my own musical pound of flesh and Tchaikowsky mostly delivers. He is perhaps too faithful to the play and makes the opera laborious in its concluding Epilogue. Though vital to the story, the end reveals the ladies were in disguise in the court and also rounds off the characters of Jessica and Lorenzo in their passionate love for one another. The score is brimming with eccentricity and hair-raisingly thrilling moments. A hilarious wink to Wagner’s Ring Cycle and other composers, feature throughout this heavy score. The outstanding orchestra appearing gloriously large in size, with only three rows in the front stalls left, proved just how much time and effort was put into the writing this opera.

It is a must see in Cardiff or on tour.

WNOs Shakspeare400 season continues with further performances of The Merchant of Venice, Verdi’s Macbeth and the premier of a new production of Cole Porter’s Kiss Me Kate.

My Guardian Demon: Letters of André Tchaikowsky & Halina Janowska 1956-82, published by Smith-Gordon is on sale now.

Weeping Tudor Productions celebrate Erik Satie in a performance of his ballet uspud at St Edward’s Church on the 13th October 2016, part of Made in Roath.

An extended performance of Satie’s Vexations take place around Cardiff starting in October till new year, as a fundraiser for OCD UK, with such venues as Cardiff University School of Music, Porter’s Bar and Cardiff Central Library as locations. Watch this space!