A band, a conscious movement, or Bristol’s crowning musical export? However you choose to describe Massive Attack, there is no disputing their incredible legacy as the UK’s cultural ambassadors to the electronic trip hop scene.

It was with this in mind that I put aside the fatigue of a thirty-six hour journey across four countries and countless luggage forms (it’s been a busy few weeks but I’ll save that story for another underwhelming article later in the month) to brave the foulest weather I’ve encountered outside of a sci-fi film. 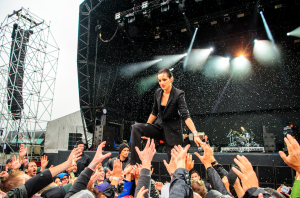 Having awoken to the splendid Macedonian summer the last time I went to bed, the unforgiving wind and freezing rain which had localised around Clifton conspired heavily against my motivation to review this event. Wondering what I had done this time to so upset Jupiter (Roman God of weather, storms and the sky – thank you short course Religious Studies!), I developed a coping strategy which involved stocking up on inhumane quantities of warm, sweet caffeinated drinks and turning every Gloucester Road charity shop upside down in the search for anything vaguely waterproof.

Armed with this new-found reassurance and constant social media reminders that I would imminently witness Bristolian musical history, I confidently set off towards the festival tents and ticket touts littering the Clifton and Durham Downs.

I was soaked to the bone from the driveway onwards, and shivering before I even reached the top of the road. At this moment I realised the unreasonable expectation Massive Attack would have to meet as compensation for the unfortunate conditions faced by ticket-holders to stand any chance of winning their support.

The event has since been publicly criticised for long queues and unprepared crowd management but, as I arrived in advance of Skepta’s set, I walked straight in to be greeted by an almost empty field and an eerily quiet VIP tent. Even allowing for the mini-festival’s 27,000 sold-out tickets, the size of the field, stage and stalls looked almost comically ambitious when the fairly large cluster who materialised to watch Skepta’s warm-up barely made an impact on the field. Skepta seemed visibly unfazed and excitedly threw himself into an enthusiastic set which sent the growing crowd into a frenzy and included all the recent classics which catapulted the BBK label to viral YouTube fame. 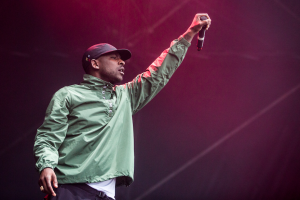 Fresh from working on the long-anticipated Konnichiwa, Skepta’s been a recurring face on this season’s festival billing

Unfortunately, as much of the festival continued to cower from the weather, the painfully-long gaps between sets on the main stage left few options to sustain morale. There was a small, second stage but the atmosphere felt somehow stifled and, sadly, more about filling the headline void than promoting local artists.

This left the Information stage (which I had unfairly written off as a token attempt to politically-charge the gig in pursuit of self-congratulatory middle-class indulgence, but actually proved a surprising highlight of the day!), a performance exhibition designed to promote the cause and struggle faced by countless refugees across the world. This would soon become a prominent theme of the evening, and even merited a brief (video) appearance from the likes of Vivienne Westwood, along with a score of talented poets, speakers and artists. 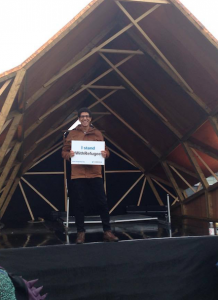 Scotland’s fathers of psychedelic rock, Primal Scream, then met their cue with a defiant but sadly lost performance to waning support and flimsy concentration from the fans. Patience wore thin as the light faded and highlighted (ironically) the biggest planning oversight of the day: the cloud cover and lack of lighting made it nearly impossible to move around safely. If I’m being generous, I would give Primal Scream the benefit of the doubt and suggest they suffered from the most difficult place in the running order. If I was feeling less charitable, I might be tempted to say their performance was simply below par on the day.

I must confess I chose this moment to explore the quirkier (and coincidentally drier) corners of the site, and was intrigued by the discovery of the Bristol Pound; a unique currency designed to encourage local investment, stimulate the city’s economy and keep money circulating in the community. I will let a finer economic mind explore whether such an idea could work in Cardiff, but I was suitably impressed to think it was worth a mention.

Finally, Massive Attack’s finest hour was upon us, and the crowds thickened accordingly. As each new act took to the stage, it was marked by a visible shift in demographic to highlight their typical fan base.

More impressive than the numbers flocking towards the stage, was the speed with which tens of thousands of people materialised seemingly from nowhere. Moving was soon impossible and I began to accept that the sprinkling of ticket touts hadn’t bought out half of the tickets as I first imagined. 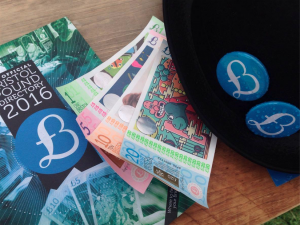 Massive Attack opened gently with a deep and solid rendition of Hymn Of The Big Wheel, framed by an incredibly choreographed digital light display.

Without stealing the show, the socially-fuelled messages, wordplay and visual effects lent a powerful significance to each lyric and provided my unshakeably favourite memory of the entire day. Far from dominating the stage, Massive Attack’s 3D and Daddy G weren’t shy about sharing their platform with an eclectic host of guest appearances; most notable of which were Tricky, Azekel and Young Fathers.

The sound was sublime, the track-list maybe lacking in originality and firepower, but the brazen pro-EU message and lighter references to rumours of Banksy’s intimate connection to the band created a unique and classic gig, which will rightly go down in the history of Bristol’s live music scene as one of the most spectacular and rousing performances in recent history. 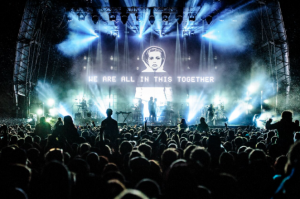 During politically unstable times, Massive Attack are unafraid to share a message of peace, hope and love

I understand the council were initially reluctant to let this go ahead on the Downs, but hopefully these issues will soon be overcome to allow a regular event of this nature to take place.

I may have initially painted a bleak picture, but in light of the nearly-literal tide facing the organisers, the gig was a colossal success and I truly walked away feeling I had been a tiny part of a momentous occasion, which would be talked about for years to come, and held as the standard for future day festivals in Bristol.

*I would like to thank Felix from Ravina Event Photography Ltd for lending me his iPhone and taking some quality snaps!

Other photos by Graham Brown, ShotAway and Benjamin Eagle.