If ‘boys and their toys’ was a genre of film, Kingsman: The Golden Circle would definitely be its crowning example. Starting with a madcap car chase through London, the pace does not relent as the audience is led on a globe-trotting game of cat-and-mouse. Eggsy, the working-class-lad-made-good protagonist, seeks the elusive leader of a drug cartel responsible for unleashing a devastating plague upon the world.

Almost everything that made the first film so much fun is ramped up for its sequel.

There are more gadgets to make James Bond’s Q sick with envy, including an electrified lasso from Kingsman’s US counterparts the Statesmen, more suits so sharp they make Savile Row look like Primark, and more action than The Expendables could shake a stick at. The zany speed-up slow-down cinematography of the famous church scene from the first gets more outings this time round, most notably in the opening chase and in the gloriously explosive climactic fight scene. It all adds up to give the film a refreshing sense of fun, something that feels desperately lacking from films at the moment.

While the first film was an adaptation of a graphic novel by Mark Millar, The Golden Circle is not a comic adaptation, but instead follows directly on from the story of the first. Although the devastation that was unleashed by the villain from the first film is overlooked, the characters have all moved on, including slimy posh-boy Charlie Hesketh, who kickstarts the action by attacking Eggsy outside the Kingsman tailor shop. His revenge scheme against the Kingsman agency forms a smaller branch of the overall plot, engineered by Poppy, the psychopathic leader of the Golden Circle. 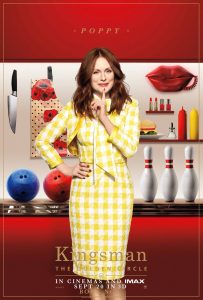 Julianne Moore clearly had great fun playing the deranged villain, demonstrating enough whimsy and menace to make believable and enjoyable the woman who runs a drug cartel from a 1950s-nostalgia-park hidden inside a jungle. Given that Moore is not known for villainous characters, this helps immeasurably: in watching her have fun, the audience can enjoy themselves more easily as she manages to make the character believably villainous and lovably eccentric simultaneously.

Much like Richmond Valentine from Kingsman, she too has a world-saving angle to her nefarious schemes: the legalisation of drugs and the immediate cessation of America’s pointless drug war. This allows the film to expand into America, however, with the introduction of US-counterparts the Statesmen, named after alcoholic drinks (though I challenge viewers not to snort with laughter when Channing Tatum’s character introduces himself).

Moore’s villain is great fun to watch, as is the climactic battle to stop her, but the film does fall down in places.

The emotional core of the first film is lacking here. Where the first film had Eggsy proving his worth in a class-based underdog story, he was also desperate to save his mother both from the effects of Valentine’s plans and from her abusive boyfriend.

That is all done away with here.

Eggsy is an established Kingsman, and so while he can gad about saving the world much more easily, the film’s attempt at an emotional plotline falls flat. Harry Hart’s resurrection should have been a surprising and emotive twist. 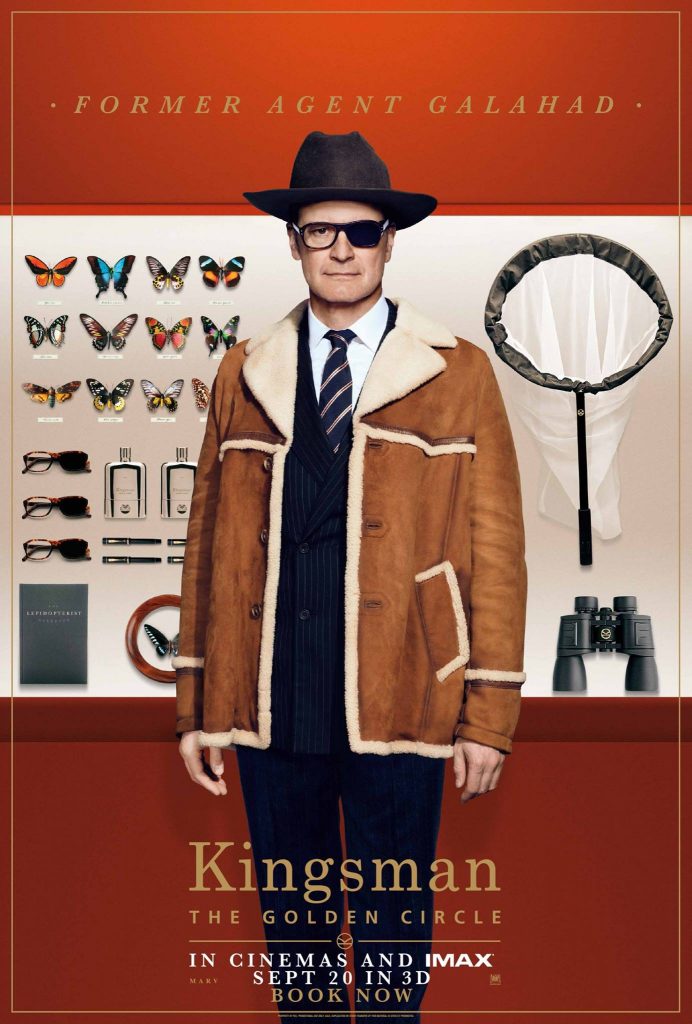 However, not only was it widely used in the marketing for the film, but story-wise is based on shaky pseudo-science that leaves Colin Firth pretending to be an amnesiac lepidopterist for an hour for no good reason before his memories and the brilliant gentleman spy of the first film are restored. Had he been allowed to rest in peace, the film would not have suffered. If it had been done better, it would have resonated more emotionally with the audiences, as his surprising death did in Kingsman.

Instead, it awkwardly shoe-horns in butterfly-hallucinations and a flat emotional reconnection scene the only saving grace of which is the puppy used to help restore Harry’s memories.

Although tempered by his hilarious lines in the scene wherein in Poppy explains her masterplan, and his action-hero moment attacking two of Poppy’s henchmen whilst wearing one of the most fabulous costumes cinema has seen since The Adventures of Priscilla, Queen of the Desert, the film could have functioned perfectly well without the Elton John cameo.

These are minor gripes, however, compared to the treatment of the female characters.

Roxy, Eggsy’s brilliant foil from the first film, is killed off almost as soon as she speaks, instead of being allowed to expand her story from the vertigo-conqueror of the first film. The plot with Princess Tilde of Sweden is, however, greatly expanded and while I won’t give away its final outcome, it is good fun watching the film play with the trope of ‘getting the girl’.

Beyond the problem of unnecessary jokes, Kingsman: The Golden Circle still a very fun movie. The villain is fun to hate, her plot is just as plausibly silly as her predecessor’s, and for all that the camera work may be dizzying, the action is still very enjoyable to watch, particularly in the opening car chase and climactic final battle. The gadgets and suits are still as brilliant as last time – like I said at the beginning, this is ‘boys and their toys’ cinema.

Overall, it is a flawed but worthy successor, and I very much look forward to the next one.