Harry Houdini is the defining name in all things magic. Regarded as a great showman, it seems UK audiences were mad for him, as he toured extensively for years in our isle.

Turns out he visited Wales a handful of times: Newport twice (1905 and 1913), with also Cardiff and Swansea as spot offs. This monologue brings to life the local Newport character of Tom ‘Toya’ Lewis; and his love of the great escape artist and how he wished to emulate him.

We hear from Tom, in his Newport brashness as he expresses to us his fanatical adoration of tricks, gimmicks and acts. His foolish attempt to cross over the city’s immortal Transporter Bridge results in him slamming into the river Usk’s mud, breaking ribs and losing a foot in the process. 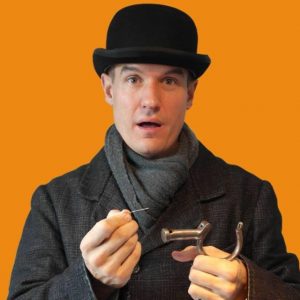 Tom tells us he was not allowed to see Houdini on his first trip to Newport, whilst on the second visit he has a bizarre encounter with Houdini on the Usk. Although this piece has a focus on Houdini, it also highlights elements of Newport’s darker history. We hear the of accounts the Irish Famine victims desperate to make it dryland, slugging through the awful mud of the Usk. A forgotten event in the city’s history is Newport Dock Disaster which is also brought horrifically to life here.

Daniel Llewelyn-Williams does an impressive job as Tom. Having written the script as well, he depicts being stuck in the mud very well, trying to make the best of his ill fated bridge crossing. The account of the dock disaster is very upsetting and is a moving account of an event which should be as well remembered as Aberfan and Senghenydd.

Innumerable timbers snapped by the dock, in a deep trench, as maintenance work was maintained, just before the end of a shift. Men trapped below, sadly drowned from the hurrying tide and the site of where nearly 40 men died was disgracefully filled in the very next day.

Through all this, the show lacks a complete dramatic bite. Williams is great in delivery, but factors of Tom’s story is left out. How you could not put into the script how Tom received the Albert Medal for conspicuous bravery by King Edward VII? This would have neatly wrapped up the factual part of the monologue. The magical elements are also average. After all, if you don’t believe in magic, how do you praise the attempts to mislead?

This show has been on a grand tour both stateside and this side of the pond. With a handful of awards (along with Williams’ Best Actor gong at Wales Theatre Awards for Not About Heroes) the success of this show has been both recognised and revered.

Review: The Moot Virginity of Catherine of Aragon @ Sherman Cymru