Ever since I can remember I was quite besotted with Avenged Sevenfold, I thought the tones of music they used was quite mesmerising and I loved the controversial lyrics and topics they chose (the song Afterlife is about murdering the characters girlfriend and then she comes back to life to murder him…there is more to that as I am sure any fan would know).

I’ll admit I don’t know much about In Flames, but I came across Disturbed a few years back when I listened to The Sound Of Silence, it brought me to tears (I’ve been hooked ever since). David Draiman has the ability to mix soft melody into the workings of heavy metal music.

Starting out in 1999, Avenged Sevenfold soon became known for their diverse sounding music and their very dramatic and controversial imagery in their music videos (such as A Little Piece Of Heaven and then most recently Nightmare). This is their first bunch of live shows since losing their drummer The Rev. His departure influenced the song Nightmare which is about how the band felt following his exit from the band. 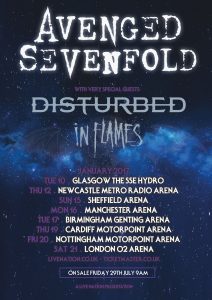 So if you often find yourself singing to Nightmare, Seize The Day or Dear God by Avenged Sevenfold then you’d enjoy a night out on the 19th of January 2017. They are coming to Cardiff to The Motorpoint Arena with Disturbed and In Flames as their supporting bands.

Why you should get a ticket to the Cardiff Music Awards