Most cities in the UK have their own musical histories, arguably the most diverse being London and Manchester, but Jake Bugg is taking Nottingham to the next level musically by bringing along Georgie on his current UK tour. Signed to the same label as Jake certainly helps with promo, but she’s always been more keen on just playing live. 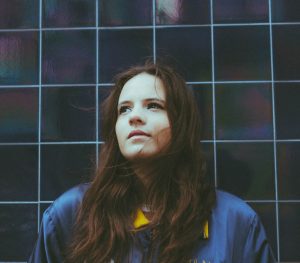 “Jake’s great, he opened up a lot for the music scene in Nottingham and it has helped people realise there’s more than just London for making music.”

She is totally chilled for the show tonight, with the sweet tones of Fleetwood Mac drifting around her dressing room, a favourite of hers and always playing wherever she goes. She’s demure but with a sense of focus for her career that’s evident in her replies. I don’t intend to put her on the spot too much so just go in for the lighter easier questions!

Note: My handheld recorder decided to throw a tantrum once I’d left so the interview was somewhat frantically scribbled from memory afterwards, but I have a fierce recall so take these words somewhat non-verbatim!

ME: How’s things, where did you just come from?

GEORGIE: I’m good, we played Bournemouth 02 yesterday it was a really interesting venue, looks like an old circus.

ME: So music seems to be something that has come naturally to you, was it something that you were surrounded by growing up, was your family musical at all?

GEORGIE: No my family weren’t musical, I remember my mum playing Elvis and Aretha Franklin records so I was listening to music all the time. I didn’t pick up the guitar until I was 14 years old and by then it was what I knew I wanted to do. I wrote my first song at that age as well.

ME: Obviously, now that you’re on the road and playing music everywhere do you find it hard to establish a dichotomy with your life outside music?

GEORGIE: Well it’s quite early in my career so there’s not too much pressure on me right now, it’s easy to go back home.

ME: Performing live in any platform is always going to be a nerve-wracking experience. Did you have to overcome any initial nerves when you started and if so how did you find it best to overcome it?

ME: Have there been any particular moments in your career, such as meeting artists or performing in venues, that have made you do a happy dance?

GEORGIE: Playing the Brixton Academy was a big moment, quite overwhelming. Going to the States to record my single was also a great experience.

ME: What would you say is the best platform for promo and getting your music out there, for example YouTube?

GEORGIE: I’ve never really been a YouTube user, the BBC Introducing site is really good for promotion. I just wanted to play live and I believe in playing as much as you can, building up a fanbase and your songs that way, plus you inspire other musicians and especially girls to play as I like to support female musicians.

ME: Standard interview question here: Future ambitions, what’s next for you?

GEORGIE: Finishing my album, going back to the States to do that. I’d like to have an album that I can be proud of and enjoy.

ME: Final question, any artists that you’d recommend our readers listen to, something that you’d go for when you wanted to listen to music.