Those are the words most of us never want to hear on a flight. But for the passengers and crew of US Airways 1549, those words became all too real.

Released on December 2nd of this year, ‘Sully’ follows the story of Captain Chesley ‘Sully’ Sullenberger, during the moments before, during and after January 15th 2009. The true story is a stunning biopic of one of the most infamous aircraft incidents in recent history.

Sullenberger, played by Academy Award Winner Tom Hanks, is an experienced pilot who has had over 40 years flying experience. Flying for US Airways, his flight from LaGuardia in New York to Charlotte, North Carolina started as any normal flight would. However, shortly after take-off, multiple bird-strikes caused a dual-engine failure, rendering his aircraft, with 155 passengers and crew, a glider. 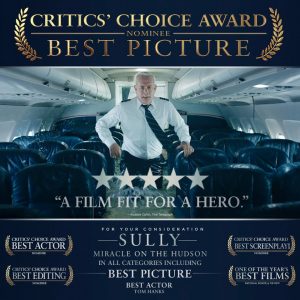 Faced with the prospect of saving all 155 souls on board, Sullenberger quickly realised that no nearby airport was accessible, and his sights fell upon the only long, flat area; The Hudson River.

From the offset, the film keeps the watcher enthralled. Clint Eastwood has pulled off a masterpiece, and it really shows in every scene, from the dramatic crash scenes to the ensuing NTSB investigation, which questions Sullenberger’s credibility as a pilot. Hanks provides an excellent performance, and this is complemented by the performance of Aaron Eckhart, who plays Jeff Skiles, Sullenberger’s co-pilot. Each scene and line is synced perfectly, and the film provides the viewer with constant entertainment for the film’s entire 96 minutes running time.

I would recommend this film to everyone. Even better, it’s only just come out, so you have loads of time to go and watch it!

“In the end, I’m going to be judged on 208 seconds” – Captain Chesley ‘Sully’ Sullenberger (Tom Hanks)